Unanimously considered as one of the pioneers, trendsetting films, Johny Mera Naam convincingly transformed the way drama, suspense, comedy, songs and particularly climax was dealt in our Hindi cinema 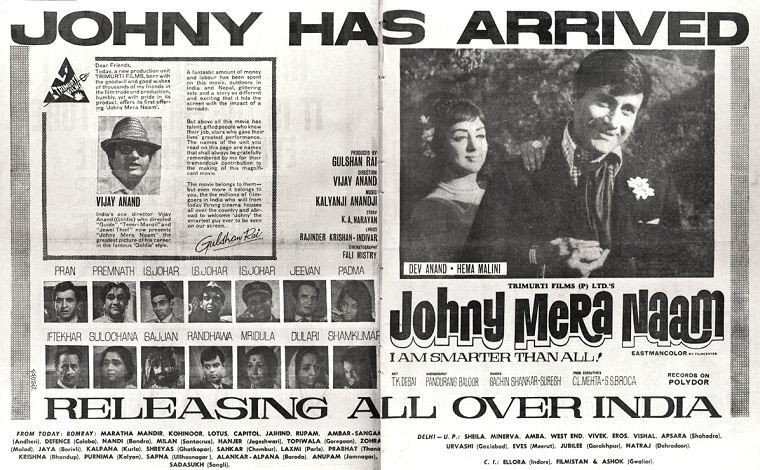 Unanimously considered as one of the pioneers, trendsetting films, Johny Mera Naam convincingly transformed the way drama, suspense, comedy, songs and particularly climax was dealt in our Hindi cinema.

Despite being based on a familiar theme, it still worked because of the novel treatment, performances and a melodious soundtrack backed by an energetic background score. Following Hitchcock’s vision of focusing on a weird, yet powerful, villain (Prem Nath), it also had James Bond kind of insertions like the lighter-camera and diamonds hidden in a racquet or iktara. Besides, it even had a shocking path-breaking striptease cabaret song (featuring Padma Khanna) at one end and a melodious devotional bhajan on the other picturised on Hema Malini in the disguise of a jogan. And then there was a spectacular climax with a chain of pre-climax sequences setting a new trend.

Sharing a few untold stories about its making, Johny Mera Naam was in a controversy with Raj Kapoor’s Mera Naam Joker because of the similar-sounding title and the films releasing at a gap of just a few weeks. Reportedly, distributor-turned-producer Gulshan Rai got instigated to make this film after an unexpected taunt coming from a reputed director. But Bunny Reuben contradicts that in his book Follywood Flashback. In a specific chapter on the controversy, he quotes Rai stating that actually Dev Anand inspired him to be a producer as they had become good friends and the script came to him with the title typed on it by K. A. Narayan, who had borrowed a portion of Raj Kapoor’s famous Mera Naam Joker being made at the same time. More importantly, the producer also informs about the climax being re-written and re-shot by Vijay Anand after Rai’s disapproval of its first version and a timely intervention by Dev.

However, Anita Padhye, in her book Ek Tha Goldy (recently translated in Hindi), writes that it was actually B. R. Chopra who said “distributors cannot make movies” to Rai, inspiring him to prove himself as a filmmaker. The much appreciated Marathi book, written post personal conversations with Vijay Anand, further reveals that the film revolving around two brothers was initially titled Do Roop, which was later changed as an astrologer suggested a title starting with the letter J. Interestingly, a report in June 1969 issue of Screen news-magazine, states that the title of the film was also Tum Jahan Hum Wahan in its initial stages.

Another lesser-known story is about Prem Nath, whose career got resurrected with Johny Mera Naam in a big way. More than a decade back, Prem had actually discovered a young writer-director in 1954 as a judge at a college drama competition. The play winning the first prize was titled Rehearsal and was directed by a young Vijay Anand. A decade later, though both Vijay and Prem worked together in Teesri Manzil released in 1966, Vijay wished to pay back the actor in a bigger manner, which he successfully did with Johny Mera Naam in 1970.

A misconception also remains about I. S. Johar playing the triple role in the film for the first time ever as Pehle Ram, Dooja Ram and Teeja Ram. In reality, Johar had himself played three roles of a son, father and grandfather in his self-directed film Kitna Badal Gaya Insaan in 1957, before Mehmood did a similar act in Humjoli (1970). It was an unofficial adaptation of English classic Seven Brides for Seven Brothers (1954) that later got adapted as Satte Pe Satta in 1982.

Coming to the rare features of the film’s advertisement published in Screen on the day of its release, it had Johny Has Arrived written in big capital words on the top and then, probably taking a jibe, announced ‘I Am Smarter Than All!’ as the tag line below the title. Surprisingly, this tag line is not to be found in all the other original posters of the film.

Breaking the set pattern, the layout included the lead as well as almost the entire supporting cast with pictures, along with the names of the key technicians and production executives. Plus, just as in the film’s opening titles, the poster too had Johar mentioned thrice with three different pictures innovatively representing his triple role.

But above all, it had a personal note by Rai, displaying the amazing confidence he had in his first venture made under the banner of Trimurti Films. The note duly thanked the entire team on and off the screen and then even predicted the success just on the first day of its release so bravely. The note was signed as Gulshan Rai, but the producer thoughtfully didn’t share his picture along the note. Instead, he shared the picture of Vijay Anand, the real creator of the classic, conveying it all. 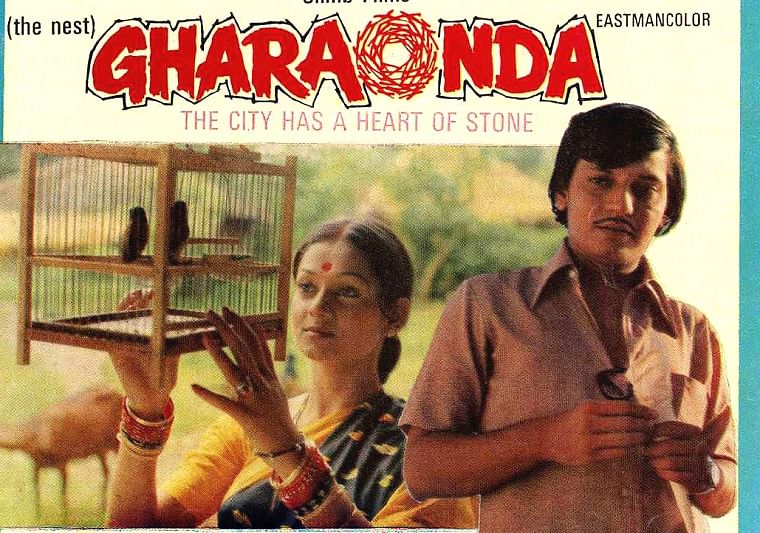 CinemaScope: What makes Gharaonda relevant even in 2020