Women in Afghanistan continue to protest over ban on girls' schools

Women in Afghanistan continue to protest over ban on girls' schools |

On Thursday, Taliban forces suppress a protest by Afghan women in regard to the ban on girls' schools nearing almost nine months.

A group of women protested in front of Maryam High School in Kabul and chanted slogans of "Bread, work, and education" indicating the deprivation of education of Afghan girls by closing all secondary girls' schools over grade six for about nine months, reported Khaama Press. The protesters carried the message of "Education is our Right." One of the protesters said that the Taliban's decree of closing girls' schools proved to be discriminatory against women. The demonstrators further pointed out target killings against women.

The protesters complained that the Taliban have even forbidden women from every social, cultural, or political sphere in Afghanistan, reported Khaama Press.

To curb the protest and disperse the demonstrators, the Taliban opened fire and resorted to violence. Time and again, the Taliban has suppressed many such protests by women in Afghanistan and even arrested them.

Earlier, Taliban militants dispersed a group of women who staged a demonstration in Kabul against the decision to make the hijab mandatory. Taliban forces reportedly ripped down the banners and dispersed the protesters.

Further, in another new decree, the Taliban directed all-female presenters working on all TV channels to cover their faces while presenting programs.

Taliban, in its official order earlier, directed female staff members of the United Nations Assistance Mission in Afghanistan (UNAMA) to wear the hijab at offices and has also curtailed Afghan women from wearing make-up and reproductive rights, ban on education for girls from classes 6 and above being an add on.

The atrocities of the Taliban against Afghan women have been on an incessant surge since the organization seized power in Afghanistan in August last year, banning young girls and women of humanitarian rights.

However, although the Taliban's Ministry of Education has assured that the schools for girls in grades 7-12 will be reopened shortly, there have been hardly any developments so far. 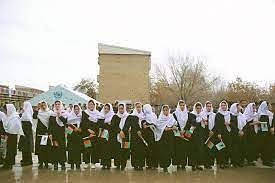 HomeEducationWomen in Afghanistan continue to protest over ban on girls' schools