The action was taken after two videos of the students passing lewd comments at the teacher went viral on social media platforms.

Screengrab of the teacher being harassed |
Follow us on

Meerut: Four students have been detained after being booked for allegedly harassing a female teacher at a school here, officials said on Monday.

The action was taken after two videos of the students passing lewd comments at the teacher went viral on social media platforms.

According to police, the students, including a girl, study at a school in Radhna Inayatpur village under Kithaur police station area. 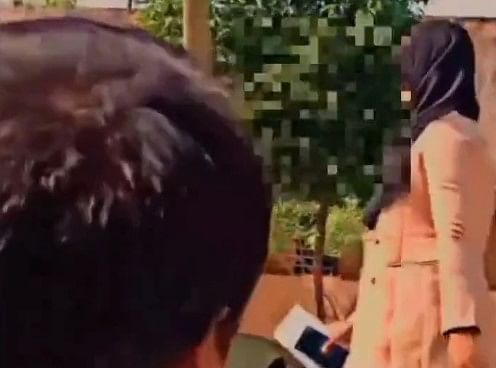 In a written complaint filed on Sunday, the 27-year-old teacher alleged that some students of class 12 were harassing her for a long time, police sources said.

"It is alleged that the students were making objectionable statements against the teacher. She confronted them on several occasions but to no avail," Station House Officer (SHO) of Kithaur police station Arvind Mohan Sharma said.

The teacher alleged that the "limit was crossed on June 24 when the students said 'I love you' to me inside the school premises and recorded a video of it. They then circulated the clip on social media."

"Apart from this, a video of them using profanities against me inside the classroom was also made viral on social media," she said in the complaint.

Sharma said a case has been registered against the students, who are aged around 16.

Meerut police had on Sunday tweeted that the four students were taken into custody and presented before the Juvenile Justice Board.