Trends on SGX Nifty indicate a gap-up opening for the index in India with a 144-points gain.
FPJ Web Desk 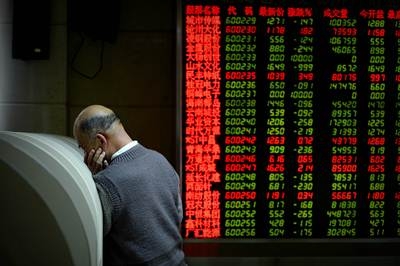 Trends on SGX Nifty indicate a gap-up opening for the index in India with a 144-points gain. The Nifty futures were trading at 17,772 on the Singaporean Exchange around 07:30 AM.

Gaurav Udani, CEO and Founder, ThincRedBlu Securities says, "The Nifty is expected to open positive at 17770, up by 160 points. Since the last few trading sessions Nifty has been taking resistance in 17750-17900 range and support in 17580-17620 range. Traders can consider fresh buying with strict stop-loss either on dips or when Nifty closes above 17950 levels."

Nifty has formed a lower top on a short term basis. It has also formed an engulfing top on daily charts which has bearish connotations. The weak advance decline ratio also suggests wide spread profit taking. Even if the global markets show some recovery, Nifty could after a small recovery again run into profit taking. Investors may keep taking a part of their profits and raise cash, while traders can keep strict stoplosses and keep reducing their positions.

US stock benchmarks scored a turnaround Wednesday, ending higher for a second day, as technology stocks found a footing and signs of progress emerged in Washington on the debt ceiling debate.

Soaring energy prices retreated and stocks on Wall Street rebounded on Wednesday after the top US Senate Republican backed an extension of the US debt ceiling and Russia calmed volatile natural gas markets in Europe.

The Dow Jones Industrial Average rose by about 102 points, registering the biggest intraday turnaround for the blue-chip index since December 21, 2020. The price-weighted index had been down by as much as 1.3 percent, or 459 points, at Wednesday’s low.

The 10-year Treasury note pulled back to 1.524 percent Wednesday after briefly climbing intraday to about 1.58 percent,, its highest since June. Natural-gas futures fell 10 percent Wednesday, after Russian President Vladimir Putin said his country would boost supplies of the fuel to ease European shortages a day after they soared to a 12-year high.

Democratic senators signalled that they were receptive to an offer from Senate GOP leader Mitch McConnell that would allow an emergency extension into December.

In US economic data, a report from Automatic Data Processing Inc. showed that 568,000 private-sector jobs were created in September, outpacing estimates from The Wall Street Journal for 425,000. For the data due on Friday on non farm payrolls, economists expect the economy added a net 500,000 jobs in September, up from the disappointing 235,000 jobs added in August, according to a Wall Street Journal poll. The unemployment rate is expected to tick down to 5.1 percent from 5.2% percent.

Asian shares rallied on Thursday, taking heart from a late recovery on Wall Street after US politicians appeared near to a temporary deal to avert a federal debt default and as Russia reassured Europe on gas supplies, calming volatile markets.

Today both gold and silver gained fractional ground with gold as of 6:10 PM Eastern Standard Time fixed at $1763.90, after factoring in today’s gain of $1.90, or 0.11%. Silver gained $0.12 in trading today and basis the December futures contract is currently fixed at $22.65 which amounts to a percentage gain of 0.52 percent. The prices quoted are based upon the opening in Australia as the financial markets begin to trade overseas on Thursdaymorning.

Supply shortages of natural gas have caused carbon allowance prices to soar as more companies are forced to turn to emissions heavy coal as an energy source, reported the Financial Times.

Carbon allowances in the EU last week were over 65 euros a ton, a record high, and in the UK, the carbon allowance market was a record £76 per ton. The region’s current cap and trade systems mean that companies are only allowed a certain emissions allotment a year, with a cap set on targets that align with the Paris Agreement goals. Any emissions above the allotment and the company must purchase a carbon allowance that equates to one ton of emissions.

"The decision to change the outlook to stable reflects Moody's view that the downside risks from negative feedback between the real economy and financial system are receding," Moody's said in a report on October 5.

SEBI on Wednesday tweaked the norms pertaining to minimum percentages of monthly trades to be carried out by mutual funds on the Request For Quote (RFQ) platform of stock exchanges.

US pvt payrolls up

US private payrolls increased more than expected in September as COVID-19 infections started subsiding, boosting hiring at restaurants and other high-contact businesses.

Private payrolls increased by 568,000 jobs last month, the ADP National Employment Report showed. Data for August was revised lower to show 340,000 jobs added instead of the initially reported 374,000. Economists polled by Reuters had forecast private payrolls would increase by 428,000 jobs.

The government is weighing a proposal to allow foreign investors to take up as much as 20 percent stake in Life Insurance Corporation of India (LIC) when it will go public. The listing is expected to fetch anything between Rs 400 billion and Rs 1 trillion from the dilution of 5-10 percent state holding in LIC. The government is looking at a valuation of Rs 8-10 trillion for the insurance behemoth.