This column will appear just a little time before budget announcements are actually made. And the purpose of writing this column is not to talk about what the budget will usher in, but what needs to be done to make the numbers and the allocations meaningful.

True, deficit financing will go up. The government will have to decide how much the deficit will be. The deficit will be necessary because India’s economy desperately needs a financial injection to make it emerge from the negative GDP growth territory. Moreover, our revenue mobilization isn’t enough to meet these demands. India needs to re-emerge at least to the level that it had reached prior to the pandemic – though it must be remembered that there was an economic slowdown much before that.

Thus, borrowed money will be poured in, and GDP growth registered. But it must be remembered that it is easy to grow on borrowed money. You can borrow money and build bridges, train tracks, ports, and highways. But borrowed money requires interest payments to be made. Therefore, unless these investments become profitable, or unless tax income from other sectors can grow fast enough to pay for the interest cost, the borrowing will boost the country’s liabilities. Next year, the interest payment on such borrowings will be higher. Left unchecked, it will lead to a debt trap. Unless, of course, the investments begin to generate revenues, year after year. 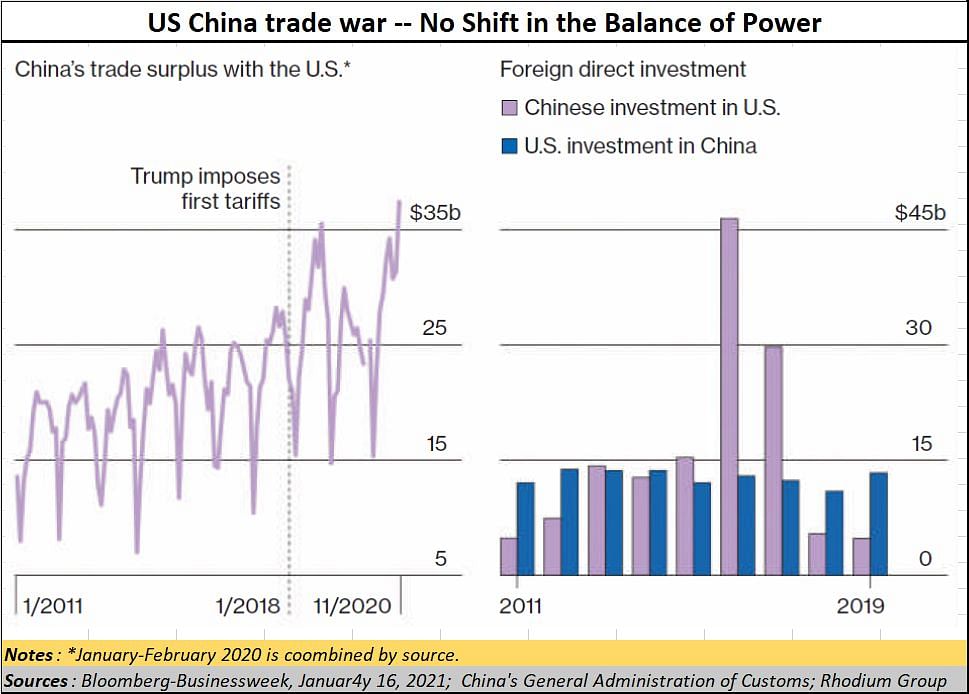 Mismanagement and bad luck have both combined to a squeeze on the surplus cash available to the government to spend on development. This is evident from the declining GFCF (gross fixed capital formation) a critical indicator of whether the assets are being used for enhancing production or whether they are being frittered away on doles, or in the stock markets, or are being siphoned away through hawala to overseas accounts.

So, let us take a hard look at what India should avoid in the coming years.

First, avoid the temptations to call bans, bandhs, and closures. Restrain the hounds who call for bans on films, bans on Facebook posts and the like, and bans on what people cannot eat. Enough of that. 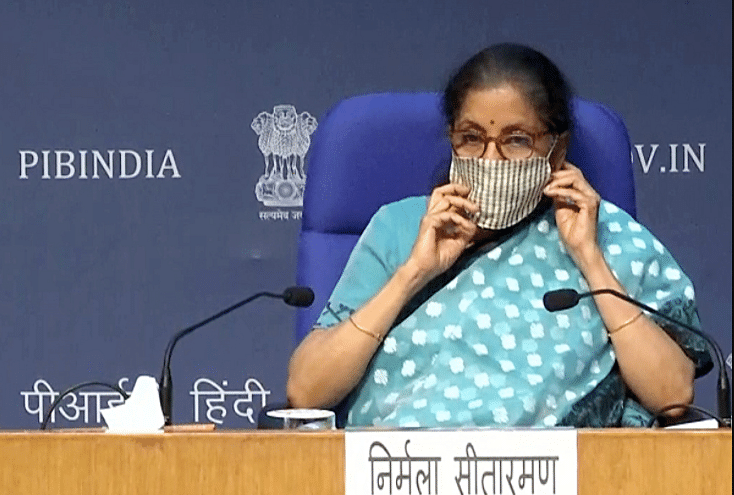 Look at the chart alongside. While it is about the US bans on China, and how these bans haven’t worked, there is a lesson for India. Bans don’t work. They don’t help the economy grow. They did not help the US economy grow. Instead, China continued to surge ahead. Bans will not make the Indian economy grow either. Look at what happened with demonetization, the total lockdown, the ban on China investments, and the ban on cattle slaughter. Each of these hurt India grievously.

Or consider India’s ban of TikTok in June 2020, on the grounds that since it was a Chinese app it was "prejudicial to sovereignty and integrity of India, defence of India, security of state and public order”. The Ken has an interesting analysis. Outside India, TikTok is killing competition. In India, the ban protected the likes of Facebook and Instagram. Across Southeast Asia, TikTok racked up 136 million app downloads in 2020. That’s nearly double of what TikTok did in 2019. The ban on WeChat helped WhatApp consolidate its fortunes in India. A similar thing is happening with the shrill cries against Amazon’s Tandav. At a time when national energies should be channelled towards economic growth, why this distraction? Shouldn’t the government stomp out this rage with a firm hand? Does someone want to protect Netflix or another e-commerce player and limit the market for Amazon? That could also be self-defeating.

Consequently, India’s young audiences have lost the ability to play with shapeshifters, and image manipulators. That could be the future market, and India has stunted its youth from learning these skills from the best-of-breed.

No wonder then, India’s per capita GDP lags those of its peers. Even Bangladesh sported a higher GDP per capita than India. This can be reversed only if India’s policymakers have a lot more respect for investments. Bans may be politically appealing. But they can be economically disastrous.

When it comes to the ban on cattle slaughter, it is necessary to point out again, that when a farmer buys cattle, it is an investment. People don’t buy mothers. So, comparing cattle purchased for investments with ‘mothers’ is specious logic. Second, the farmer gets Rs. 20,000 or more for each cattle that has stopped lactating. If the government does not like the idea of cattle slaughter, please pay the farmer Rs. 20,000 for each non-lactating cattle. Then it away from the farmer because even maintaining costs for old cattle can be horrifyingly expensive.

If someone believes that old cattle can be profitably used, let that person look after all the old cattle and make as much of money as he wants. But don’t penalise the farmer. If he does not get his Rs. 20,000 per non-lactating cattle-head, the chances are that he will not purchase a fresh milch cattle to replace the one which has stopped producing milk. Obviously, such a move hurts the farmer, increases farmer distress, and it hurts the economy. It adversely affects leather, which is a labour intensive and export revenue generator. That too hurts the country. Another issue that needs to be highlighted is the desperate need for improving investment in human capital. India’s investment on education and health has been pathetic. The only country which has performed worse than India in this neighbourhood is Pakistan. All the other neighbours have registered a higher HCI (Human Capital Index score).

Clearly, the first step will be providing additional sums for higher expenditure – even at the risk of a higher fiscal deficit. But that is only the first step.

There must be enabling policies – like increasing seats in medical colleges. The best way to do this is by expanding the medical seats in government-owned hospitals. No additional land is required because hospitals can have more floors. There is no shortage of patients, which is what medical colleges require sorely.

But the facilities – including trained medical staff – is woefully inadequate. Unless there are enabling provisions to augment capacities on the one hand, and improve the quality of education on the other, the additional funds will only fatten some intermediaries without improving the HCI.

Resist the temptation of degrading education. Don’t erode the autonomy of educational institutes of excellence. The IIMs and IITs are already on a warpath with the government on this issue. Let there be separate ayurved and homeopathy hospitals. Let the doctors trained in these disciplines work in these institutes. Let customers decide whether they want to go to an Ayurveda hospital or to an allopath hospital. But don’t mix the treatment. Just don’t recommend that a surgical procedure in an allopath hospital be done by an ayurved or a homeopath. This will degrade and corrode the sanctity of disciplines. And it will corrode accountability as well.

If the Indian economy must grow, it can be sustained only if India focusses on productive investment in education and health. Therefore, spending money is just the first step. It is a critical first step. But without supportive policies that allow for outcomes to be monitored and the inefficient be weeded out, most budgetary expenditure might get wasted. 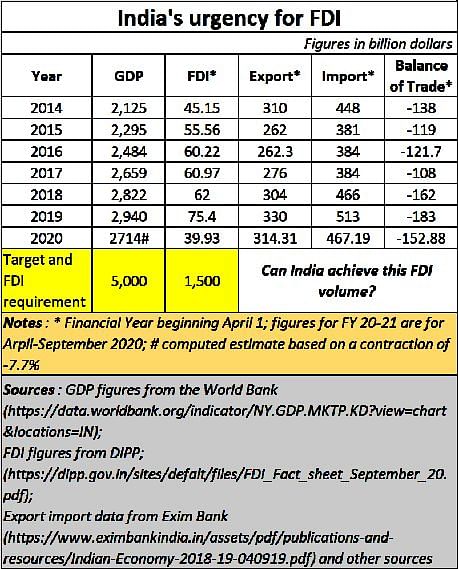 To get this volume of money it will have to change its approach. It must provide for effective dispute resolution, investment protection and even abolish reservations (of any manner whatsoever).

Alternatively, it can create special economic zones where industries can get all the three desirables mentioned above.

Finally, there is the issue of revenue leakages. There are good reasons to believe that there could be a leakage of as much as Rs.3 lakh crore from the exchequer. To stanch such leakages, first remove the provision deftly inserted in March 2018 as an amendment to the FCRA (Foreign Contributions Regulations Act). The amendment allows political parties to receive foreign funds, with no questions asked, with retrospective effect for 42 years. Not surprisingly, no political party has asked for the removal of this amendment. So it is all right for the government to ban NGOs from receiving foreign funds, but not political parties. Not fair. Not right. Clearly, if the government is committed to a Swabhiman (proud) Atmanirbhar (self-reliant) Bharat, it must first remove such obnoxious amendments which allow for foreign influence over Indian politics. Such an amendment encourages political parties to become money laundering machines.

As stated earlier, borrowing money to boost GDP is the easiest thing to do. To make a country grow, a lot more needs to be looked at. These measures are certainly not part of the Budget exercise. But without these measures, budget provisions mean nothing. They will just provide more money for being laundered, and more money coming back to the stock markets in the form of FPI (foreign portfolio investments). That will mean a weaker rupee and higher inflation, and eventually to a subdued GDP growth.

The time to change is now. The current crisis needs to be overcome urgently.