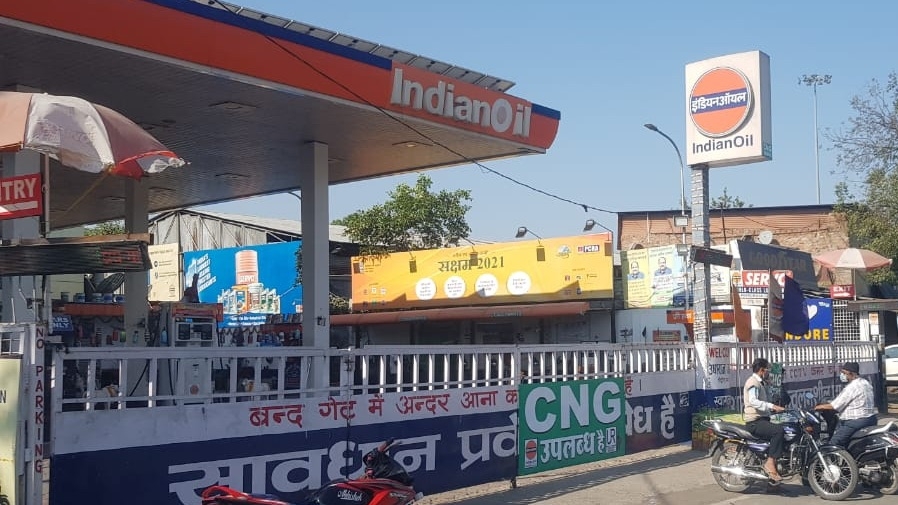 Even though, global crude oil prices have fallen in the last couple of weeks to reach below $ 70 a barrel from a high of $ 77 reached early last month, OMCs have not revised petrol and diesel rates downwards but have kept its prices static for the past 23 day/ Repesentational image | FP Photo

Fuel consumers could have got between Rs 1-2 per litre relief while filling up their vehicle's tank with petrol and diesel but for the reluctance of oil marketing companies to trust the current softening of global oil prices.

Even though, global crude oil prices have fallen in the last couple of weeks to reach below $ 70 a barrel from a high of $ 77 reached early last month, OMCs have not revised petrol and diesel rates downwards but have kept its prices static for the past 23 days. Even on Monday petrol and diesel prices remained at the same level (Rs 101.84 for petrol and Rs 89.87 for diesel in Delhi) that was reached on July 17.

In the month of July, Indian basket crude has remained on an average at $ 73.54 a barrel. But in the last fortnight, based on global benchmark prices, crude has averaged around $ 71.5-72 a barrel.

As per oil industry experts, every $1 change in crude normally affects retail price of petrol and diesel roughly by 45-50 paise a litre with no major change in the rupee-dollar exchange rate. If this calculation is applied, the retail price of petrol and diesel should have started falling from this week in India with OMCs requiring to bring down rates by over Rs 1-2 per litre in a few days or at one go.

"The previous fortnight provided an opportunity to OMCs to cut retail fuel rates. However, they have chosen to wait and watch as crude is still swinging on daily basis rising and falling consistently. Things would get clearer when more crude starts entering the market from next month by OPEC countries. This could soften oil prices if there is no big pickup in demand and US inventory levels remain stable," said an oil sector expert not willing to be named.

If we see the average price of the Indian basket of crude for the past three months things become clearer on retail pricing of auto fuels. Crude averaged around $ 66.95 in May, $ 71.98 in June and $ 73.54 in July. So the crude increased by around $6.5 a barrel in the last two months. This as per calculations should have pushed petrol and diesel prices by about Rs 3.50 per litre during the period. But, fuel prices during the period has gone by more than Rs 7 per litre giving the OMCs all the more reason to cut prices at least now.

There have been occasions in the past one month, when OMCs could have provided relief to consumers by cutting fuel pump prices. But, this has never been applied so far and OMCs seem to be satisfied by keeping petrol, diesel prices unchanged. And at the first instance of market indications, fuel prices have been increased. Only on July 12, OMCs reduced the price of diesel by 15-17 paise per litre but even on that occasion petrol prices rose by up to 35 paise per litre.

The 23 day long price pause for retail rate of petrol and diesel now has come after fuel prices increased on 41 days since May 1. The 41 increases have taken the petrol prices up by Rs 11.44 per litre in Delhi. Similarly, diesel has increased by Rs 9.14 per litre in the national capital.