NPA accounts: Protecting bank staff is fine, but what about addressing elephant in the room

It is conceded that bank staff would be hamstrung in their functioning should they constantly fear the Damocles’ sword hanging over them.
S Murlidharan 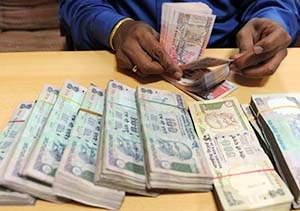 Strong macroeconomic data and a weak US currency against its major rivals overseas restricted the rupee’s fall, forex dealers said. |

To protect the staff taking bonafide business decisions, the finance ministry has issued a uniform staff accountability framework for non-performing asset (NPA) accounts up to Rs 50 crore. Frauds have been excepted from this protection, and rightly so.

These guidelines shall be implemented with effect from April 1, 2022, for accounts turning non-performing assets (NPAs) beginning next financial year. Bank staff’s past record would form an essential part of this regime. So far so good.

It is conceded that bank staff would be hamstrung in their functioning should they constantly fear the Damocles’ sword hanging over them. In fact, bank managers’ worst nightmare is CBI swooping in on them. So much so, many of them play it safe by choosing to invest in the safety of gilts rather than invite questioning by the investigative agencies and the subsequent opprobrium. Hindsight can always be a convenient tool for questioning a decision. Be that as it may, but we are missing the elephant in the room.

The Indian banking system has been rocked by NPAs- the genesis of which have been fraud writ large at the very outset. The gangotri of NPA is loan sanctioning. Prime Minister Narendra Modi alluded to this by saying tongue-in-cheek that ‘phone banking’ was responsible for quite a few major festering problems of NPA. He was referring to Kingfisher Airlines mammoth default of Rs 9,000 crore, plus the ticking interest to the banking system. Add to this, the age-old practice of evergreening (sanctioning a new loan to pay-off the old with the ignominious NPA tag).

The allegation of crop eating the fence in the case of Yes Bank shocked the conscience of the taxpayers and moralists alike. Its CEO and founder Rana Kapoor was alleged by investigative agencies of being the ‘lender of the last resort’. Wannabe borrowers, denied credit by others, were allegedly welcomed with open arms by Yes Bank for a quid pro quo or you-scratch-my-back-I-scratch-yours Faustian deal.

IL&FS and SREI Infrastructure Finance scripted a perfect story of labyrinthine lending (layers of subsidiaries foxing the investigators) to hoodwink the investors and banks.

The point is, the nation has been fighting the diversion of funds menace responsible in ample measure for the burgeoning problem of NPA for a long time now. The fugitive economic offences law was a good measure to halt the marauders who took flight to London and other salubrious climes to escape the proverbial long arm of the law.

The newly-fangled Benami law was also a good move, but crooks continue to sneer at the system, so much so that time has at last come to throw the baby with the bathwater, as it were.

In the US, listed companies have to borrow from the market by issuing bonds. Any laxity in servicing them results in junk grade with deadly consequences for the defaulter, especially for its future. It is time we refuse to give loans to listed companies and force them to meet their borrowing needs from the market, which is ruthless in punishing the laggards and deviants.

Banks are loath to name and shame the defaulters. In other words, bank finance should be available only for the small borrowers, be it in business or elsewhere. Retail loans have been the safest from banks’ standpoint, so much so that a private bank has made it its holy grail---shun industrial loans.

Policy wonks should think seriously in terms of addressing the easiest get-rich-quick-scheme, i.e. bank borrowing that has spawned quite a few banking jokes---your borrow in lakhs, you are in trouble with the bank; you borrow in crores, the bank is in trouble with you. You come and borrow on your bicycle, but arrive in style riding your Mercedes to say you have gone bankrupt.

Indeed, bank borrowing has been the most glaring white collar crime known in the country. Industrial loans, to be sure, defy placing collaterals at the disposal of the lender unlike gold and home loans. In other words, hypothecation (in which security remains with the borrower) has proved woefully inadequate in securing banks’ interests.

(S Murlidharan is a senior columnist and tweets @smurlidharan)