Saurabh’s predicament is one that will affect many other tech professionals working for firms in the US on an H1B visa.

Imagine finally landing in the US to live the American dream with a job at one of the world’s top tech firms, only lose it all and become a statistic in the country’s tech layoff wave. After Twitter, Meta and an iconic firm such as Disney, e-commerce giant Amazon has also decided to fire more than 10,000 employees, which includes hundreds from India. Following the heartbreaking tale of a Meta employee who got laid off two days after reaching Canada for the job, an Indian data scientist, who lost his job at Amazon, has also shared his story on LinkedIn.

Race against time for techies on US visa

Saurabh Vaidya, whose profile describes him as a applied scientist at the firm, wrote that the impact of the tech layoff had put him in a difficult spot due to his immigration status. Saurabh is has immediately started looking for another opportunity in the US, since he only has two months to look for a new job or else he’ll have to leave the country. The rule which applies to H1B visa holders in the US, which are mostly coders and engineers, has put many Indians like Saurabh in a difficult position with three major tech firms laying off thousands. 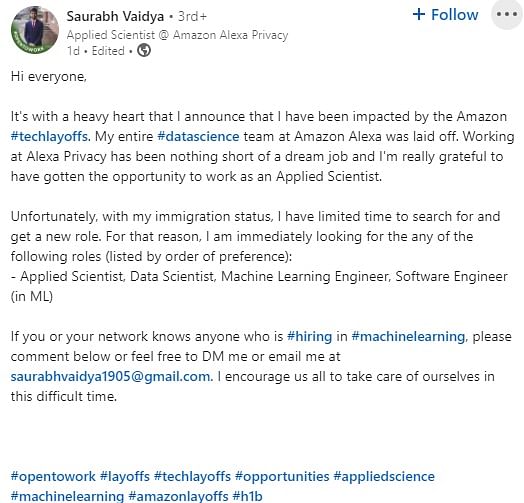 He also wrote that he was grateful for his time at the data science team for Amazon’s AI Alexa, which he described as his dream job. But now Saurabh is left with borrowed time to find work for saving his American dream, at a time when low earnings and falling ad revenues have led to a hiring freeze in the country’s tech sector. Leading job search platform LinkedIn itself has announced that it will pause the hiring process.

The situation in India so far

It has also been reported that Amazon is asking employees to resign voluntarily instead of firing them, in lieu of a special severance package. Bloomberg has also reported that some employees are joking about being promoted to customers after losing their jobs at Amazon.

Lalit Kumar Modi: How the architect of IPL took a wrecking ball to India’s sacred relationship...

As Amazon shuts 3rd vertical in India, here are setbacks that have hit the e-commerce giant