Bank unions to stage dharna before Parliament on Dec 10 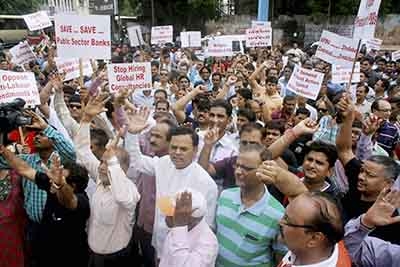 Mumbai: Thousands of employees of various state-run banks are planning to stage a sit-in on December 10 in front of the Parliament to protest against the government's mega merger plan of public sector banks.

In August, the government announced its plan to merge 10 public sector lenders into four to create fewer and stronger global-sized banks.

It had announced four new set of mergers of state-run banks-- Punjab National Bank taking over Oriental Bank of Commerce and United Bank of India; Syndicate Bank merging with Canara Bank; Union Bank of India will amalgamate with Andhra Bank and Corporation Bank; and Indian Bank will merge with Allahabad Bank.

"Government has been pursuing the policy of merger of public sector banks despite the adverse implications.

Experience of mergers in the country and elsewhere has clearly shown that no benefit accrues to any of the stakeholder," a statement issued here said.

Bank employees will stage dharna on December 10 in front of the Parliament, it said.

The dharna has been called by six bank unions.

They claimed that in the name of rationalization of branches, a large number of branches would be closed, affecting the common man.

"Mergers of state-run banks will definitely deprive affordable banking to the poor and the needy," they said.

The attention of the banks will be shifted from recovery of bad loans and serving the common people to merger-related complications.

"Mergers create monopolistic situation and cost of banking services is bound to go up, hurting the interest of the common man," it said.

Earlier on October 22, bank employees affiliated to AIBEA went on a one-day nation-wide strike to protest against the merger of state-run banks.