Hasina would visit China from July 3 to 5 during which she would hold talks with President Xi Jinping, Premier Li Keqiang and other top leaders
PTI 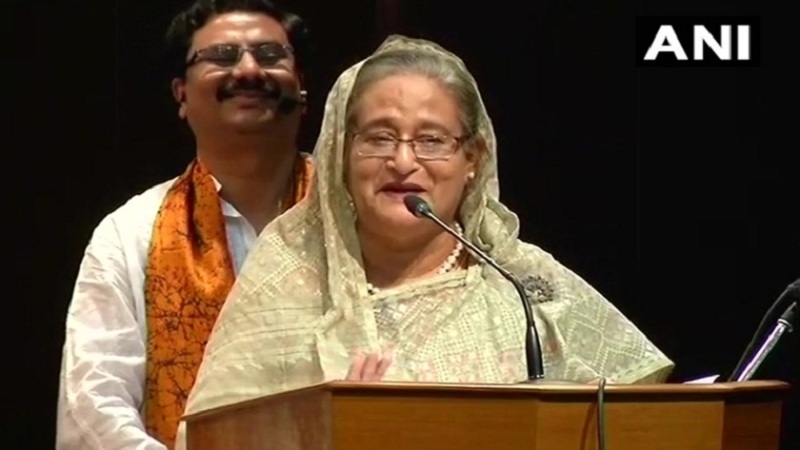 Beijing: Bangladesh Prime Minister Sheikh Hasina will visit China in July first week, the first trip to Beijing after her re-election, during which the Asian giant may press for speeding up of the Bangladesh-China- India-Myanmar (BCIM) economic corridor which has failed to take off. With an estimated USD 31 billion investments, China has emerged as a major investor in Bangladesh - mainly in the infrastructure and energy sectors - raising concerns in India over growing Chinese influence in the region. The rapid expansion of Chinese investments in Bangladesh were regarded as the second highest by Beijing after the USD 60 billion China-Pakistan Economic Corridor (CPEC).

Hasina would visit China from July 3 to 5 during which she would hold talks with President Xi Jinping, Premier Li Keqiang and other top leaders on improving the bilateral ties and exchange views on issues of mutual interest, Foreign Ministry spokesman Geng Shuang told the media here on Tuesday. Hasina would also take part in the Summer Davos meeting at Dalian which would be inaugurated by Li, Geng said.

"Summer Davos", also known as the annual Meeting of the New Champions (AMNC), is organised every year in China by the World Economic Forum (WEF) which hosts annual meeting at Davos in Switzerland where world leaders gather to interact on the state of the global economy and investments.

This will be the first official visit of Prime Minister Hasina since her re-election and her visit provides an important opportunity for the two sides to charter the future course of the bilateral relations, Geng said. He said both the countries are strategic cooperative partners. "In recent years, they enjoyed mutual political trust, economic cooperation and cultural exchanges," he said.

President Xi visited Bangladesh in 2016 during which the two leaders reached an important consensus, he said. "We have been implementing that consensus and advancing the Belt and Road Initiative (BRI) cooperation projects bringing tangible benefits to our peoples. We look forward to this visit to consolidate our friendship and strengthen development strategies coordination, deepening cooperation and bring bilateral relations to a new high," he said.

The reference to the BRI was significant as China has been routing most of its investments through its multi-billion dollar global project aimed at financing and building infrastructure projects, especially in developing countries to enhance its influence across the world.

Both the CPEC and the BCIM were the components of the BRI which was mooted by President Xi when he came to power in 2013. The BRI aims to link Southeast Asia, Central Asia, the Gulf region, Africa and Europe with a network of land and sea route. While the CPEC regarded as the flagship project took off, the BCIM failed to make headway. India has protested to China over the CPEC as it is being laid through Pakistan-occupied Kashmir.

China lately is making efforts to revive the BCIM. After a long gap, Xi raised the BCIM project during his meeting with Prime Minister Narendra Modi at Bishkek on the sidelines of the Shanghai Cooperation Organisation summit early this month.

"We need to expand cooperation channels, carry out cooperation in investment, production capacity and tourism, expand common interests, and jointly promote regional connectivity, including the development of the Bangladesh-China-India-Myanmar Economic Corridor (BCIM) so as to achieve better cooperation and common development," Xi said.

The 2800-km BCIM corridor proposes to link Kunming in China's Yunnan province with Kolkata, passing though nodes such as Mandalay in Myanmar and Dhaka in Bangladesh before heading to Kolkata. China this month organised the BCIM Forum, an unofficial body of think-tanks from the respective countries at the just concluded China South Asia Business Forum in the Chinese city of Yuxi in Yunnan province. It was expected to come up during Hasina's visit.

China's investments in Bangladesh included the construction of 6-km long bridge across the Padma river, as the Ganga is known in the country, costing about USD 3.7 billion and the USD 2.5 billion power plant at Payra near Dhaka, according to media reports. The power plant was in news this month following clashes between Bangladeshi workers and their Chinese counterparts. One Chinese worker was killed and six others injured in the clashes.