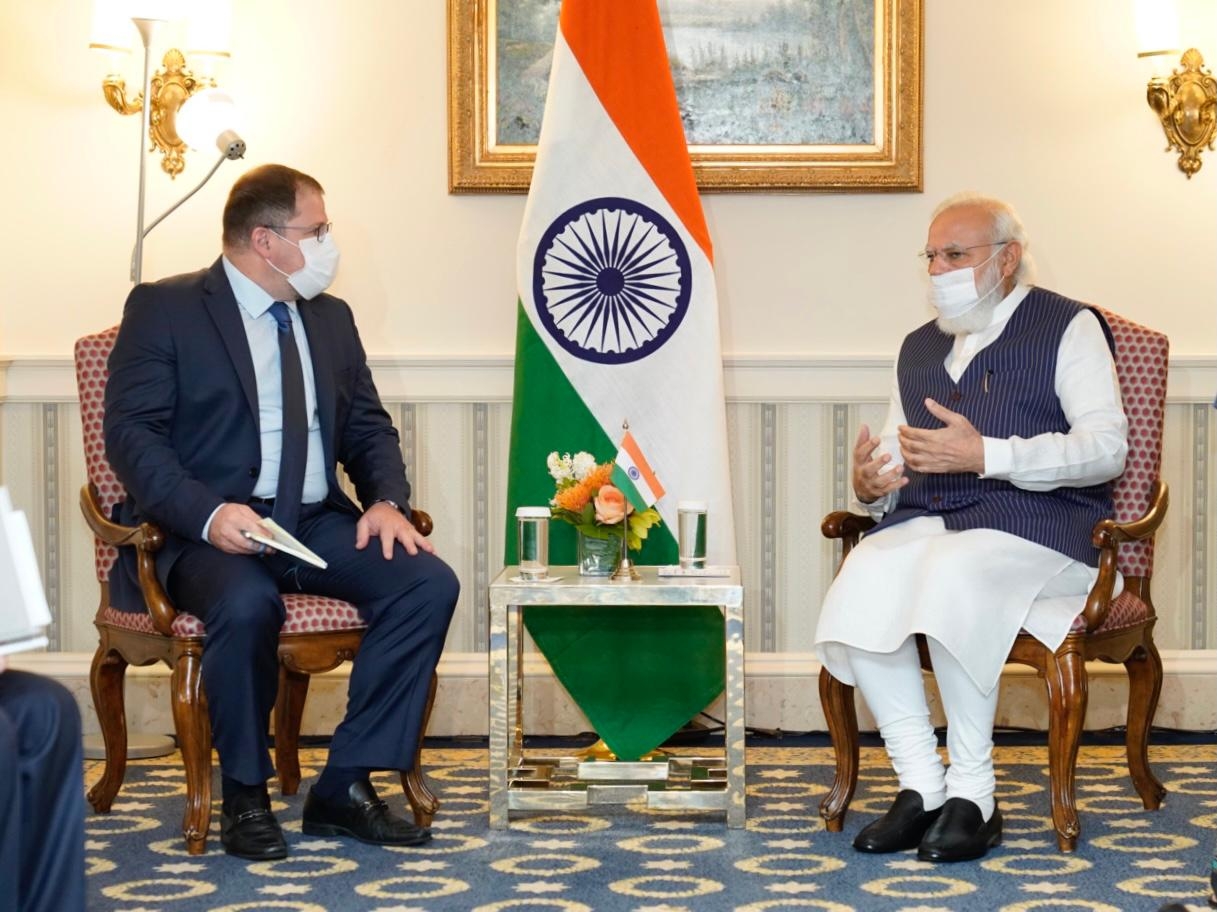 India has great potential for attracting investments and manufacturing under the various programmes introduced by Prime Minister Narendra Modi as companies try to diversify their global footprints, according to hi-tech CEOs who met him.

"Because of the necessity to diversify and build a very resilient supply chain for semiconductors, we believe India could be an important destination for manufacturing," Qualcomm CEO Cristiano Amon told reporters in Washington after his meeting with Prime Minister Modi on Thursday.

President and CEO of @Qualcomm, @cristianoamon and PM @narendramodi had a productive interaction. PM Modi highlighted the vast opportunities India offers. Mr. Amon expressed keenness to work with India in areas such as 5G and other @_DigitalIndia efforts. pic.twitter.com/kKcaXhpFtB

Prime Minister Modi's "approach to drive economic growth in making India, a destination for investment for investment has been very successful", said the CEO of the $150 billion company that is a leader in the manufacture of chips used in everything from cameras to aircraft and a pioneer in 5G technology.

The high level of optimism for India comes as the US and several other countries rethink their supply chains and their manufacturing bases, while also keeping an eye on China, which is set on trying to get a stranglehold on future technologies with strategic goals.

Hi-tech to be key priorities in Quad Summit today

When the leaders of the Quad - Prime Minister Modi, President Joe Biden and Prime Ministers Yoshihide Suga of Japan and Scott Morrison of Australia - hold their summit on Friday diversification of hi-tech is expected to be one of their priorities because of the strategic importance of technologies.

Japan's business publication Nikkei reported last week that a draft of the Quad summit joint statement would "agree to work toward creating a safe supply chain for semiconductors."

Speaking at the UN on Tuesday, Biden has said that the Quad would be elevated to meet challenges in emerging technologies, among others.

India's goals of inviting hi-tech manufacturing mesh with the US and the Quad plans.

First Solar's CEO Mark Widmar said that what Prime Minister Modi has done to "create a really strong balance between industrial policy as well as trade policy" makes it an ideal opportunity for companies like First Solar to establish manufacturing in India.

CEO of @FirstSolar, Mr. Mark Widmar described his meeting with PM @narendramodi as outstanding and also elaborated on why he is optimistic about closer business relations with India, especially in manufacturing. pic.twitter.com/75ggIKayPU

"His commitment to ensuring domestic capabilities and ensuring his long term climate goals and objectives with focus on energy independence and security", Widmar said is an alignment that "couldn't be better for companies that are looking to manufacture in India. And I think the enablement of an environment that is pro-business, this is more opportunity for us to be successful to help India achieve its climate goals."

First Solar is one of the world's largest developer and financier of photovoltaic solar power systems connected to grids.

The "very laudable policy prescriptions and reforms" introduced by Prime Minister Modi "will certainly catalyse a lot of interest and investments in India," Vivek Lal, the CEO of General Atomics, said in the series of video interviews posted on twitter by the Ministry of External Affairs.

Discussing a subject of the future, which has captured the imagination of the present.

"Many of my colleagues at US companies see India as a very promising destination," he said.

He said that the reforms in both India and the US have created a "win-win" situation and both countries can benefit from their collaboration.

General Atomics is a defence and technology company and a leader in the development and manufacture of drones.

Shantanu Narayen, the CEO of Adobe, said he was "a huge supporter, and fan of what the Prime Minister's doing" to improve the business and investment climate in India. He said the ecosystem for startups in India is "awesome".

"PM Modi believes that technology is the way to help things move forward.”

Mr. Shantanu Narayen, Chairman, President and CEO of @Adobe shares what he discussed with PM Modi during their meeting. pic.twitter.com/4uovM0kRF4

"What's really inspiring, is that these Indian startups are actually having as their growth the entire world," he said. "So their aspirations are not restricted to India, they're actually thinking about how they conquer the world."

Adobe is the maker of ubiquitous document software and the leader in multi-media solutions.

Giving greater momentum to investments in India.
Mr. Stephen Schwarzman, the CEO of @blackstone met PM @narendramodi. Various investment opportunities in India, including those arising due to the National Infrastructure Pipeline and National Monetisation Pipeline were discussed. pic.twitter.com/i7zHAECppi

A tweet from the Prime Minister's Office said that "giving greater momentum to investments in India," they discussed "various investment opportunities in India, including those arising due to the National Infrastructure Pipeline and National Monetisation Pipeline." (The two programmes provide for privatisation with time limits for some national resources or government enterprises.)

About his meeting with Modi, Amon said, "We talked about incredible opportunity to advance the industry not only domestically in India but Indian as an exporter of technology as we think about the digital transformation."

"Very pleased with the conversations and we're very, very happy with everything we're doing together with India," he added.

Narayen said that the key topic was "continued investment in innovation, because he certainly believes that technology is the way to help move things forward."

About his company's plans, he said, "India is a big area of investment for us. Adobe has three growth initiatives: Everything around creativity, document productivity and powering digital businesses, and artificial intelligence is going to change how all those three solutions are delivered. So we intend to continue to invest heavily in it."

Widmar said, "One of the things we want to do in India is not only to be there to support the domestic market, but we want to be a technology leader in leveraging capabilities that India can provide. And then also compete on a global platform and to participate in export into international markets."

He said that India's goal of producing 450 gigawatts of renewable energy by 2030 was of global significance in dealing with climate change and "we would want to be part of this."

He said that the Production Linked Incentive (PLI) programme of the government to encourage productivity was a draw.

Lal said that in the areas of critical technologies "one wants to leapfrog into the next generation."

This would be "not only the platform systems but as well as the design and development of various aspects of the ecosystem so that could include the maintenance and so forth," he said.