Eternal Echoes: Through poems, Sadhguru touches upon each element of life

Poems in this book, written in the last three decades, flow like a constant stream of experiences and observations, each connected to Sadhguru’s soul
Sumeet Naik 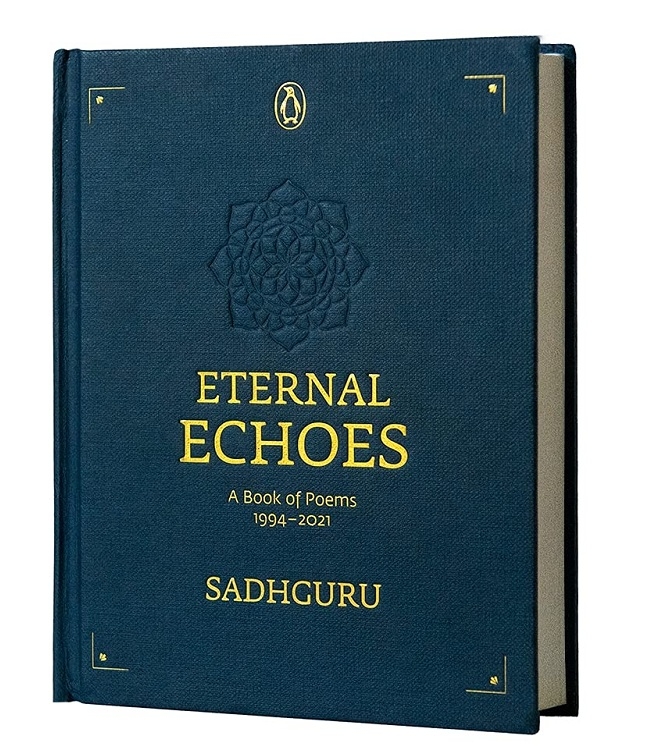 To go beyond the limitations of logic to express oneself is poetry. Often what you see around, irrespective whether it is living or non-living, becomes a substantial subject to write about. From the very source of existence to the present ‘have it all’ mindset of mankind, Sadhguru has touched upon each element of life in his book of poems titled, Eternal Echoes.

“Insufficiency of one’s existence makes Humans claim all that they set their eyes upon. Land, soil, water, people and even patches of Moon” — a poem written under the title Frenzy is a mirror of our never-ending greed. Sadhguru puts across meaningful thoughts through several poems, which are not beyond a stanza. Like the one titled Life, which says: “The most Restless Ones Rest so well when life is taken out of them. As if the only Curse was life.” Bound By Love review: Nityanand Charan Das' new book is an insightful read about love for the divine

Poems in this book, written in the last three decades, flow like a constant stream of experiences and observations, each connected to Sadhguru’s soul. Divided into various segments like Life, Death, Yoga, Nature, Love and Devotion, Guru, Toil, Mystical, Shiva, People and Places, Epic and Grace, the book undoubtedly awakens the poet resting deep within every reader.

Going through each poem penned by Sadhguru, I wished some of this poetic wisdom were read and shared among the global leaders who came together on one platform to pledge their support towards tackling the serious issue of Climate Change at Glasgow, Scotland under the banner of COP26 Summit, also known as The United Nations Climate Change Conference. Especially the one titled: Intelligent Idiots.

A civilization cultured by the River.

The River revered as flowing from the head of the Great Lord.

The River that can cleanse and nourish.

We have contaminated and contained.

Time to look at not how to exploit but to nourish and preserve.

This is not being an eco-warrior but the formula of sustenance and survival of the most intelligent idiot that we are. Banaras review: The book gives reader a glimpse of everything that makes this city unique

“Who you are is your making. Once you understand this, at least you must make yourself to your own liking,” opines Sadhguru. How many of us are striving to be real? He has also been vocal about faking one’s personality, trying to be someone else and not the real self. “It does not take much for a human being to live well. Only when you are trying to imitate someone else, it takes a lot,” Sadhguru has stated this more than once during this various discourse. And this thought is reflected in Eternal Echoes.

Time and again, Sadhguru has made several attempts to put across one of the most important aspects of the human mind, which also reflects into several writings in this book and that of one’s own belief in making or destroying oneself. He writes, “the sign of intelligence is that you are constantly wondering. Idiots are always dead sure about every damn thing they are doing in their life.”

In the past too, Sadhguru has enlightened us through his writings. Though Eternal Echoes is a collection of poems from the year 1994 to 2021, Sadhguru had written over 1600 poems before this as well. Unfortunately, none of them exists today, as all of them were gutted in a fire that engulfed Sadhguru’s car. As a reader, I am certain that you would wish that those 1600 would also resurface one day mystically and we have yet another Eternal Echoes to submerge into.