The exhibition-cum-sale, organised by the MP Khadi and Village Industries Board, is into its ninth day but has had few visitors and even fewer buyers.
Staff Reporter 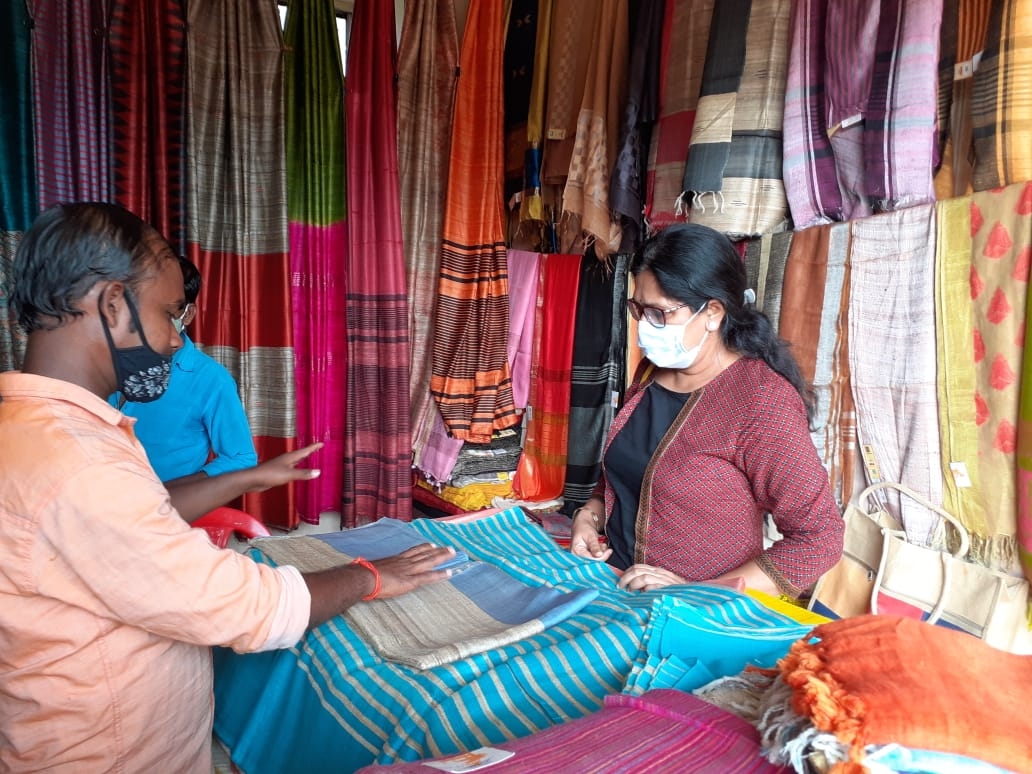 BHOPAL: Weavers from all over the country, who have set up their stalls at the ongoing ‘Charkha Khadi Utsav’ at the Bhopal Haat, are a disappointed lot. The exhibition-cum-sale, organised by the MP Khadi and Village Industries Board, is into its ninth day but has had few visitors and even fewer buyers.

The event, which began from October 9 will end on October 19. Cooperatives and self-help groups from 12 different states, including Uttar Pradesh, Bihar, Maharashtra, West Bengal, MP etc are selling their Khadi products including saris, dress material, kurtas, pyjamas, jackets, shirts and kurtis at 110 stalls at the expo.

Kardeep Kumar, 42, from Gram Nirman Samiti, Kartarpur, Nalanda (Bihar), who has brought Khad, cotton and silk saris, says that sales have been negligible. “People are simply not coming,” he said. Kumar said that about 100 families are associated with the Samiti. They spin cotton thread and weave clothes. “So far, our total sales have been worth just Rs 12,000 and we have to pay Rs 8,000 as rent for the stall,” he says. Kailash Likhar from Vinoba Gram Sudhar Sanstha, Nagpur, described the event as a ‘super-duper flop’. He said that probably the people are wary of spending money on non-essentials. “The new generation is not interested in weaving. Most of the weavers of our organisation are 60-plus. Their children prefer to wash cups and saucers in hotels to becoming weavers,” he said.

Mohammed Faizal from Delhi was waiting for customers at his stall. “It is 3 pm and I have not sold a single item,” he says. Faizal blamed lack of proper publicity and wrong timing for the poor response.

Yogesh Kumar, who was manning the stall of Kshetriya Khadi Gramodyog Samiti, Dausa, Rajasthan, said they had recorded sales of just Rs 30,000 to date. “Ours is a 100-year-old cooperative. Around 19,500 weavers and spinners are associated with it. We have a staff of 150,” he said. Kumar feels that the venue chosen for the expo is not proper. He says that Khadi outfits are very popular in Rajasthan. “Gehlot sahib has announced a 50% discount on Khadi clothes from October 2 to December 31,” he says.

Prosonjeet Samatha from the 40-year-old Nadiya Gramin Silk Sansthan, West Bengal also complained of poor response. Shakeel Ali from Khekra Handloom Producer Company, Baghpat, Uttar Pradesh said that the sales were dull. “Covid pandemic has broken the back of us weavers,” he said.

However, Divyansh Duberia, manning the stall of Kabira Khadi brand of MP Khadi and Village Industries Commission, says that they are having brisk sales. “We are offering a 35.2 % discount on our products,” he says. Madhya Pradesh: Tourist dies after falling into gorge while taking selfie in wildlife sanctuary in...