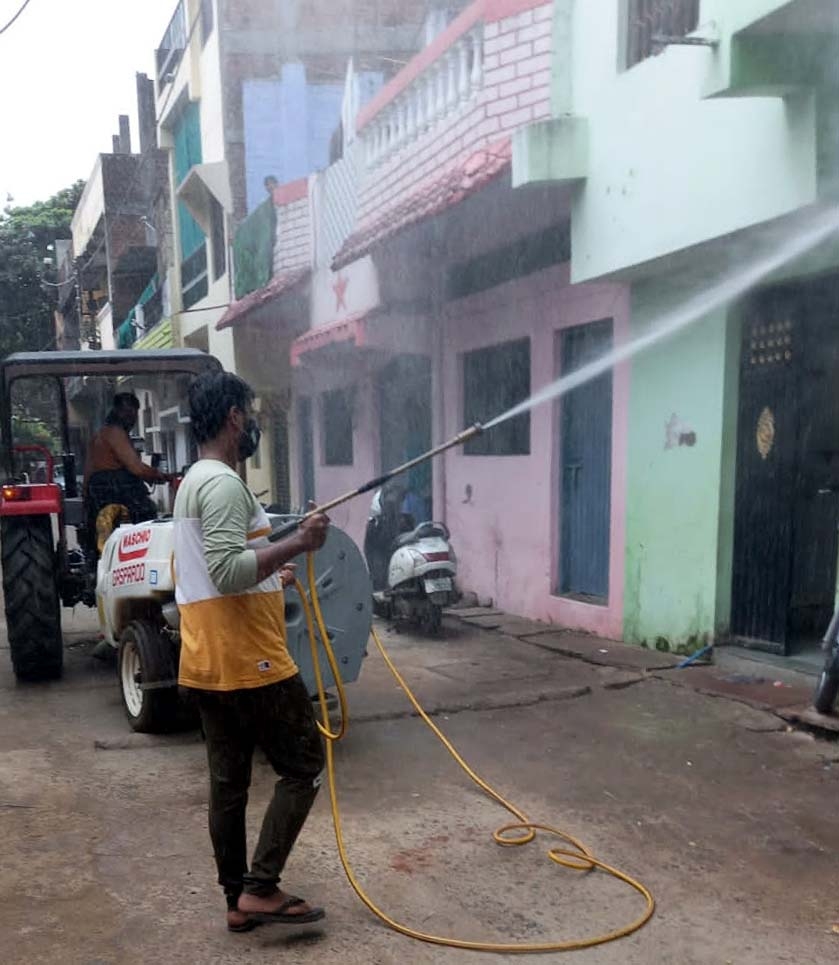 Chemical being sprayed in one of the residential areas of Bhopal for dengue prevention . |

BHOPAL: Health department records show that the numbers of dengue cases are on rise in Madhya Pradesh. The state reported 6,500 dengue cases and of these 50 per cent are children. Beds in Public hospitals are fully occupied as patients there is a regular influx of patients suffering from dengue and viral fever. Children constitute the maximum number of patients undergoing treatment in hospitals. More than one patient is sharing a bed in government-run hospitals.

Mandsaur and Ratlam continue to be dengue hotspots in the state. With 1200 cases, Mandsaur leads the tally of worst hit districts in the state followed by Ratlam which has so far reported over 800 cases. Jabalpur stands at third position with 700 dengue cases. Gangue figures in Gwalior and Indore stand at around 500, while Bhopal – in the 5th position, has reported 400 cases so far. As many as 31 districts of the state are majorly contributing to the state dengue tally.

According to a doctor, who attended video conferencing over dengue cases on Tuesday, the around 48 % to 50 % of the total dengue patients are children.

“With the ever passing day the situation is deteriorating in the state. Bhopal alone has reported 400 dengue cases and here over 51 per cent of dengue infected patients are children,” said the doctor. Dengue menace in Madhya Pradesh: One child on one bed, covid test must, MP High Court to Health...

Dengue Fever (DF) – marked by an onset of sudden high fever, severe headache, pain behind the eyes, and pain in muscles and joints. Some may also have a rash and varying degree of bleeding from various parts of the body (including nose, mouth and gums or skin bruising).Dengue has a wide spectrum of infection outcome (asymptomatic to symptomatic). Symptomatic illness can vary from dengue fever (DF) to the more serious dengue hemorrhagic fever (DHF).

Dengue Hemorrhagic Fever (DHF) – is a more severe form, seen only in a small proportion of those infected. DHF is a stereotypic illness characterized by 3 phases; febrile phase with high continuous fever usually lasting for less than 7 days; critical phase (plasma leaking) lasting 1-2 days usually apparent when fever comes down, leading to shock if not detected and treated early.