His belief in spreading Gandhian ideology was revolutionary and made him popular in the country, especially the Chambal region. He was an active participant of the Quit India Movement of the Father of the Nation Mahatma Gandhi and went to jail many times.
FP News Service 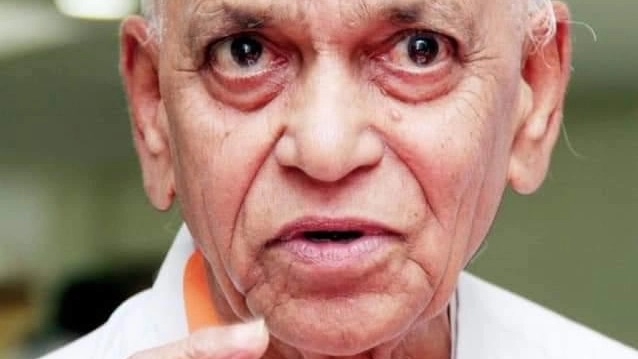 Gwalior (Madhya Pradesh): Half pants and khadi shirt, popularly called Bhaiji. Spreading Gandhian ideology, Subbarao was called the peace messenger of Chambal and was a source of inspiration to the youth. The identity of Dr Subbarao was often known by his unique khadi attire. His belief in spreading Gandhian ideology was revolutionary and made him popular in the country, especially the Chambal region. He was an active participant of the Quit India Movement of the Father of the Nation Mahatma Gandhi and went to jail many times.

Eminent Gandhian thinker Dr SN Subarao breathed his last on October 27 at SMS Hospital in Jaipur. Born on 7 February 1929 in Bangalore, Karnataka state, Dr Subbarao was influenced by Gandhi's ideas from the very beginning. To establish Gandhian ideas across the country, he stepped into the Chambal Valley in 1954. In 1964, he established Gandhi Seva Ashram in Jaura tehsil of Morena district, organized a camp here and worked to connect the youth. More than 5,000 families are getting their employment by manufacturing Khadi clothes in Gandhi Ashram.

SN Subbarao came into the limelight in the Chambal area when on 14 April 1972, even after more than 600 dacoits, he continued to contact the dacoits to inspire them on Gandhian ideology and keep on changing their hearts. This is the reason why infamous dacoits of the Chambal area laid down their arms at a Gandhi Seva Ashram in Jora. Apart from the notorious dacoit Mohar Singh Madhav Singh at Gandhi Seva Ashram, more than 600 dacoits were impressed and decided to follow Gandhian ideology.

Tomorrow the last rites of Dr. Subbarao will be held at Gandhi Seva Ashram in Jaura, Morena district.

The remains of Dr Subbaro will reach Gandhi Ashram in Jaora, via Delhi, this evening. The last rites will be performed tomorrow at the Gandhi Seva Ashram in Jaora, Morena district. Politicians, eminent personalities of the country and abroad are also likely to attend the funeral of Dr Subba Rao. Madhya Pradesh: Programme on obtaining Geographical Indication for Potato and leather toys on...