Good Samaritans: Help pours in from Rajasthan for flood-affected in Gwalior, Chambal divisions

“We have distributed dry ration, biscuits and other eatables to 200 people in Jwalapur, Khatauli and Quila Mohalla”.
Smita

BHOPAL: Good Samaritans from Rajasthan, neighbouring the Gwalior-Chambal region of the state, have extended a helping hand to flood victims on this side of the state border. Their efforts are particularly focused on Sheopur, one of the worst-affected districts.

Khalid Iqbal Attari from Mangrol, a municipal town in Baran district of Rajasthan, is one of them. He and his team have been visiting flood-affected areas for the past three days. “We have distributed dry ration, biscuits and other eatables to 200 people in Jwalapur, Khatauli and Quila Mohalla,” Attari told Free Press over the phone.

They have provided Rs 3,000 to affected families for their immediate needs. Iqbal, who is associated with Faizan Global Relief Foundation, said they will go back to Mangrol on Sunday and will return with relief material stocked there after two or three days. “The situation is very bad here. Some people have been left with nothing except clothes on their bodies,” he revealed.

Arshad Ansari from Kota (Rajasthan) is also camping in Sheopur, distributing wheat flour and provisions to victims. “We are providing tarpaulin sheets to those whose houses have collapsed,” he says. He is associated with Dawat-e-Islami.

Syed Balig Ahmed from Sawai Madhopur district of Rajasthan, along with 10 members of Association of Muslim Professionals, reached Sheopur in three vehicles and a mini-truck loaded with relief material. The team includes two doctors and nursing staff. They have put up a medical camp on the premises of Chattardasji Ka Tila Temple in Sheopur.

“We are going from door-to-door in Bhainspada and Quila areas, asking people whether they need medical help. We found several people suffering from skin problems. Also, there were cases of diarrhoea and vomiting,” he said.

The doctors examined the patients and provided medicines to them. “In all, we have distributed medicines to 500 people and ration kits to an equal number of people,” he said. “An unbearable stench pervades the area. Things are rotting and there is muck all around,” he says.

Ahmed says that while the government is doing its work, they too have “a duty towards brothers and sisters.” 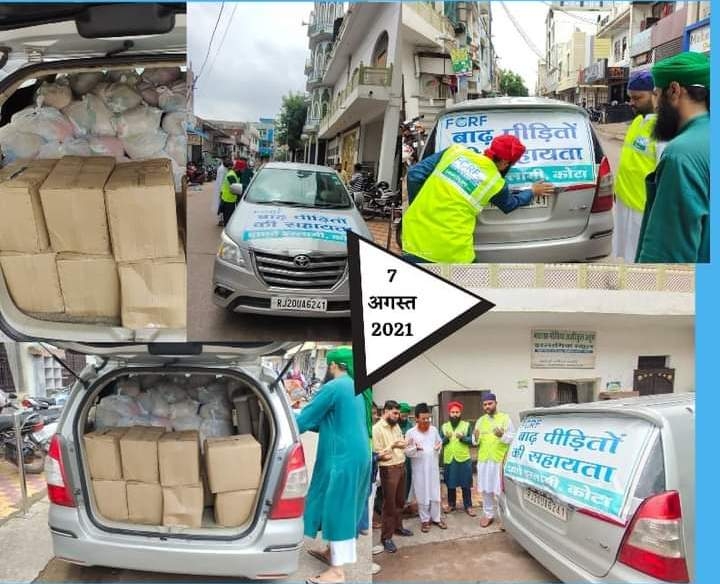 Members of Mahatma Gandhi Seva Ashram with support of Welthungerhilfe and Share On have launched a collection drive in Bhopal to help people in flood-affected area.

“Our aim is to provide immediate relief to 5,000 families in Sheopur. And we are getting good support. About 20 people have contacted us within a few hours of our drive announced on social media,” Patel said.