Residents withdraw case on BMC’s assurance of allotment of houses.

Bhopal: In joint operation, the teams of district administration and Bhopal Municipal Corporation (BMC), demolished four houses which were coming in the way of the approach road to the arch bridge.

The residents challenging the demolition of their houses had withdrawn their case after they reached a compromise with BMC for allotment of houses.

Earlier this week, the High Court had ruled in favour of Bhopal Smart City in a case related to the approach road to the arch-bridge. The order of the Jabalpur bench of the High Court has paved the way for inauguration of Rani Kamlapati Arch-bridge.

A petitioner had filed a case against Bhopal Smart City Development Corporation Limited (BSCDCL), which is constructing the bridge. The petitioner challenging the construction of approach road had argued that it was being built illegally and for the same the houses around were to be demolished, which in turn would leave many people homeless.

“We fought the case for around 5 five years challenging the construction of the arch bridge as according to rules, persons cannot be displaced twice. Initially, we were displaced in 1992 and now we are again for the arch bridge. We got stay in High Court but gauging that ultimately we would have to vacate the place we decided to settle the matter amicably. And, when BMC replied in HC with an assurance for allotment of houses, we withdrew the case.”

Gufran Beg, a resident of the area. Devendra Chaudhary, tehsildar, said, “BMC will allot the house to residents whose houses are being demolished. Only when they accepted our proposal did we begin demolition of houses at the corner of Kilol Park, in front of Petrol pump. The demolition of four houses has cleared the way for the construction of the approach road to the arch bridge.”

Advocate Sanjay Gupta said, “In 1992, three of the same family—Usman Beg, Sultan Beg and Gufran Beg along with one Sajid were displaced from Retghat when VIP Road was constructed. And against this the BMC had allotted them plots. Similarly the four houses were hindering the approach road work. The residents opposing the construction had moved District and Sessions court. However the decision went in favour of BMC and thereafter the residents challenging the decision of the lower court appealed to the High Court and got a stay. However, now since the residents and BMC have reached a compromise with the civic body assuring for allotment of houses, the residents have withdrawn the case in High Court.” 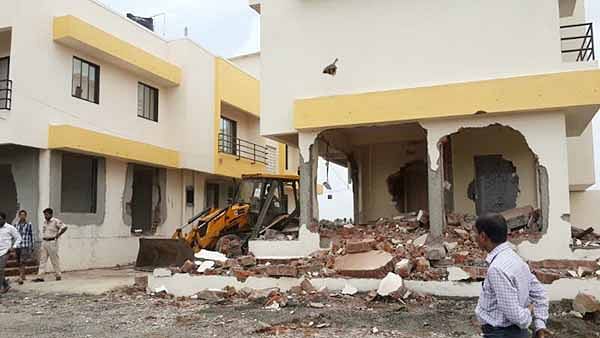 Bhiwandi tribals up in arms against demolition drive