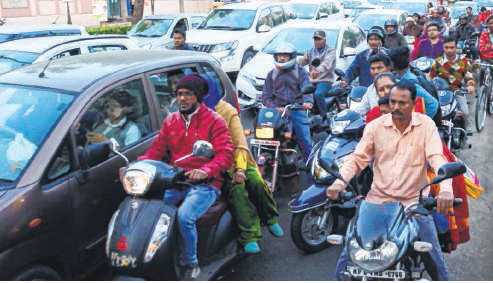 Bhopal: Visit of AICC president to attend Congress’ rally left residents frowning as traffic snarls and jams were reported all across major roads connecting Jamboree Maidan, BHEL on Friday evening. The day passed off smoothly, however, as the Congress rally concluded, roads remained chocked as crowds of people who had come to attend the event poured out around 5.00 pm.

Dozens of buses, SUVs that had come to attend the rally came on the road bring down the entire traffic arrangement to a naught. As office goers heading back home and vehicles returning from Congress rally poured out on road, the entire traffic on Board Office square and Chetak Bridge linking Jamboree Maidan was thrown haywire.

As many motorists took to MP Nagar’s subsidiary routes to bypass main roads snarls, traffic congestions was witnessed at the city’s commercial hub including Rachna Nagar under bridge. Movement of public transport was hit as long jams on roads were witnessed Police had chalked out traffic diversion ahead of Rahul Gandhi visit and additional force was deployed on major routes. However, traffic restrictions made the commuters to cover longer distance to reach their destinations.