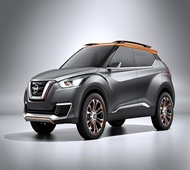 Post the confirmation of its production and name in January this year, Nissan has announced that it will officially reveal the Kicks on 03 May 2016. The ‘global’ compact SUV/crossover will make its world debut next month in Brazil and lead the 2016 Olympic Torch Relay in Rio, which will pass through more than 300 Brazilian cities. Though nothing has been confirmed by the automaker, the India-bound SUV is expected to be a sub-4m offering, much like the Ford EcoSport.

The Nissan Kicks is said to be based on the Renault–Nissan alliance’s ‘V’ platform and will globally sit below the Nissan Juke. The ‘V’ platform has been localised in India because it underpins the Micra, the Sunny, and their respective badge-engineered cars – the Renault Pulse and the Scala. The Japanese automaker doesn’t have any offering in the rampantly growing sub-4m SUV space.

Nissan’s sole compact SUV – the Terrano (the badge-engineered Duster) – isn’t doing much to boost sales and neither are the Micra twins. So, the Kicks has the potential to raise the bar and turn around the overall sales of the ailing line-up of its Indian counterpart. If launched, the Kicks will compete with the likes of the Maruti Suzuki Vitara Brezza, the Ford EcoSport, the Mahindra NuvoSport, the TUV300 and the upcoming entrants – the Honda WR-V, the Hyundai Carlino and the Tata Nexon.

Nissan has not yet revealed the engine and transmission options for the Kicks. But the vehicle might borrow Renault’s diesel, the way it happens in the Indian avatars of the Duster and the Terrano with the two versions of the 1.5l dCi (85 PS and 110 PS). Speaking of petrol, the Renault–Nissan alliance should introduce its turbocharged petrol motors in India. As of now, only the Ford EcoSport offers a turbocharged downsized petrol (1.0-litre EcoBoost) while the Vitara Brezza will reportedly offer it by the end of the year (1.0-litre Boosterjet). Furthermore, the Tata Nexon is said to come with a 1.2-litre turbocharged petrol. Thus, the Kicks can become the perfect platform to introduce turbo petrol in India for the alliance.