A former Enforcement Directorate official lobbies to join a political party immediately after retirement. He is in the company of many other law enforcement officers who have opted to join political parties immediately after retirement. Earlier, we had the chief justice of India taking similar steps. That does throw into question all the sensitive politically-loaded cases that were assigned to them just before they retired.

A minister calls industrialists anti-nationals merely because they do not (and rightly so) like the shape his draft policy on ecommerce is taking. This is even while youth unemployment is among the highest in the world (see chart). The ecommerce and retail sectors (along with logistics) are among the biggest employers in the country. Is the government trying to shrink industry and promote unemployment? There’s trouble ahead!

The government invokes provisions of the Citizen Amendment Act (CAA) to underscore its commitment to Hindus who are stranded in Afghanistan. Did India not take in refugees in the past without the CAA? Remember Bangladesh, or the earlier crisis in Myanmar. Is the CAA really required? Are past capabilities forgotten? Will the religious bias that has been introduced in the CAA help India in its global relations?

On the domestic front, the government turns a blind eye to the adage that subsidies actually prop up the weak and cripple the healthy. While they may be required during times of crisis, it must be accompanied by measures that simultaneously encourage wealth generators to create more. More trouble.

Railing against industrialists, stunting markets, pursuing policies that will only harm the dairy sector, one of the biggest success stories in India (which provides livelihood to 10 crore (or 100 million) households or 5 crore people), are not moves that will help revive the economy. One is led to believe that such policies, not external circumstances, have become the primary cause for the economic slowdown.

Meanwhile, the Prime Minister’s Office finally decides to disallow the installation of the PM’s statue in a temple— but only after mass protests erupt. Demagoguery again.

It does appear that all reason has been thrown to the winds. The objective is winning elections and appeasing vote banks, even if it means further weakening the country.

As Kaushik Basu, former chief economic advisor to the government in India, and currently Professor of Economics at the Department of Economics, Cornell University, Ithaca and New York, states in his Tweet, “Clearly India doesn't belong where it has ended up. High youth unemployment is very damaging for a nation. We must put politics aside and implement measures to rectify this”.

It then comes as no surprise to political analysts that Russia, China, the US, and Pakistan have begun discussions on the future of Afghanistan. India has been excluded. 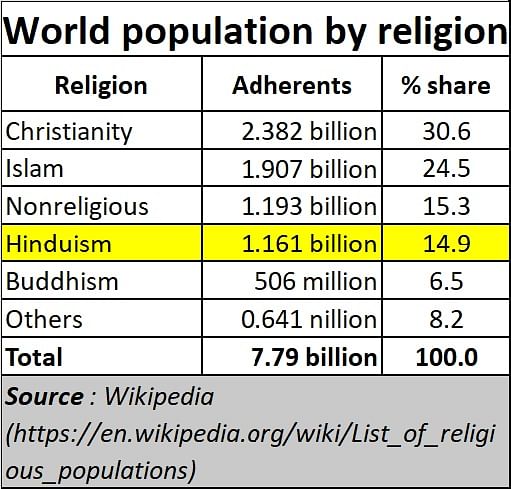 In its attempts to get closer to the US, it agreed to be a foil to China. That has left both Russia and China miffed.

India’s much-in-evidence prejudices against minority communities has upset both Christian and Muslim populations (remember the protests in Qatar, Malaysia and even the Christian world when it heard of the death of Fr. Stan Swamy). If India continues to recklessly provoke Muslim and Christians further, the marginalisation of India will be swift, even unforgiving. India’s weakened economy has made the country more vulnerable than ever before.

Both the Christians and the Muslims account for 40% of the world population. Hinduism accounts for 15%. The prime minister’s Independence Day utterances from the Red Fort ramparts on August 15 this year haven’t helped much either. Trouble being stirred in the pot?

Sadly, India has been promoting just one culture overseas – Hinduism. It has chosen to overlook the fact that India is an amalgam of cultures. It has always remained so. Some of the biggest wealth generators in India were Muslim and other non-Hindu traders who plied the oceans to trade with other countries even 1500 years ago (even earlier in ~50 BC, before the birth of Islam or Christianity. Hindus were petrified by the very thought of crossing the oceans. It was non-Hindus who traded with the world and made India extremely wealthy. This is history, and ideologues should not try rewriting the facts as chronicled by Pliny and other historians. Hindus may be the largest religious community in this territory, but the government has no business promoting just one religion.

Is India trying to become an over-reacher on the religious front? Has it forgotten that -- unlike Western and middle eastern armies which promoted religion even by the sword -- Orientals do not believe in promoting religion, or even political ideology? The East has always been accommodating, even embracing of cultures.

Expectedly, almost as a backlash against the government’s moves to push Hinduism, some thinkers – backed by departments of around 60 universities -- have decided to hold a series of discussions on how to dismantle the global Hindutva movement. Some of the universities include Northwestern, Berkeley, Chicago, Columbia, Harvard, Pennsylvania, Princeton, and Stanford. In retaliation, Hindu groups have begun lobbying against the holding of this event, and want it stopped.

Expect the issue to further polarise India against other nations. This too could have been avoided, if the Indian penchant for bans and proscriptions were not so intense.

This was to have been expected. Consider how, the moment a BJP government was formed in Assam, one of the first laws passed related to the cow slaughter ban.

As said before, there is nothing preventing a government from banning anything, but for a serious flaw. It refuses to compensate farmers who now cannot sell their old cattle. They used to get around Rs.20,000 for each old cattle. This money was used to part-finance the acquisition of younger milch cattle as replacement. Now this will become more difficult.

And while idealogues will claim that even old cattle can be put to use, a sensible way would be for the idealogues to take ownership of such cattle and make as much money as they can from such them. Just give the farmer his Rs.20,000 and free him from owning the old cattle.

Don’t burden the farmer with the additional cost of medication for older cattle, and the risk of such cattle spreading diseases to the young.

Today, the biggest loser is the farmer. The government, on account of religious ideology, has once again destroyed wealth. Eventually, this will further harm the entire economy.

When ideologies dictate business practices, the fallout is invariably quite messy.

Add to this the huge churn taking place in global markets. The US is moving towards tapering its excessive currency float. That in turn has sucked out money from all markets. The result is a collapse in asset values, which may continue to tumble. 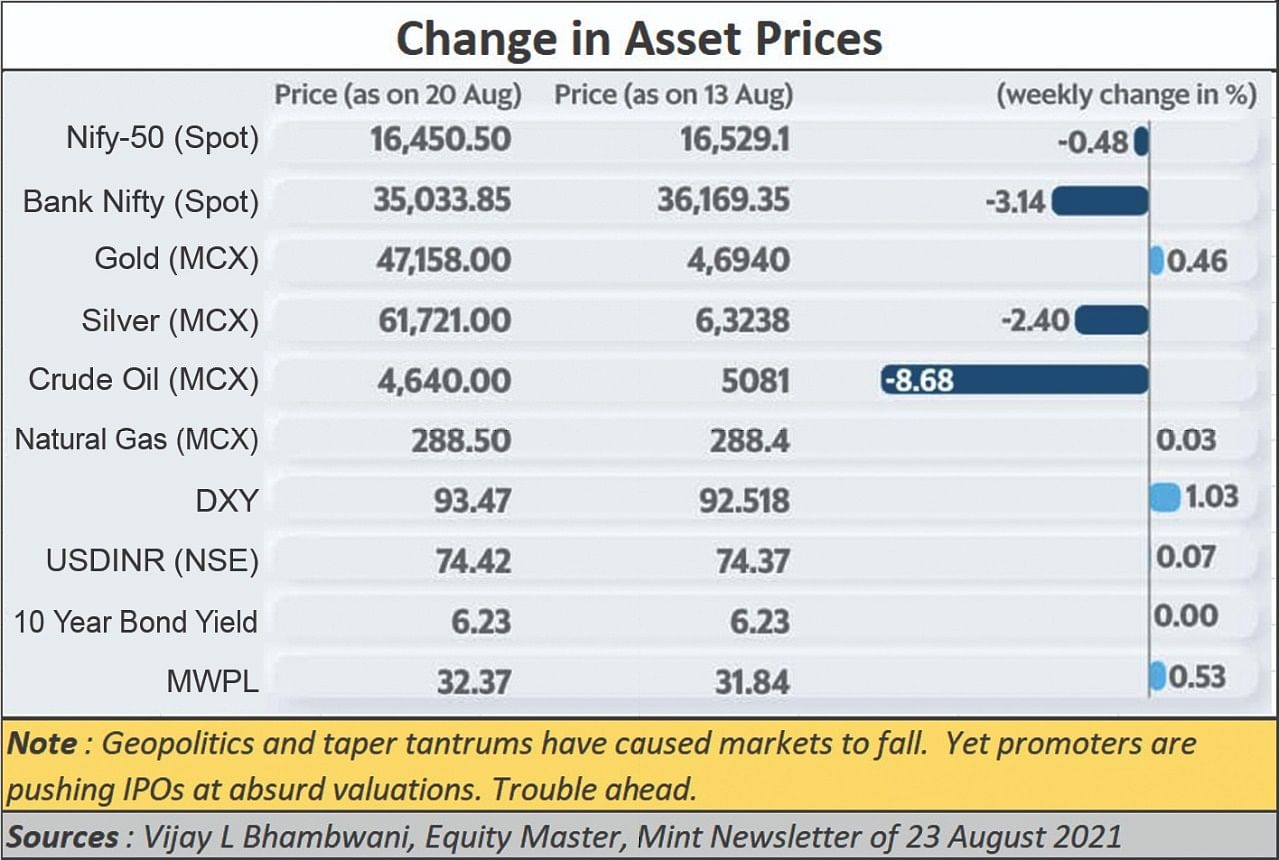 This would not have been very serious if India had already been a recipient of foreign direct investments (FDI). But the government waited for too long to remedy the aversion for investing in India. It finally took the step of ensuring that no retrospective legislation will take place.

Will that work? That is not clear as of now. Vedanta has refused to give a clear reply about whether it is going to accept the government’s offer. It may be right in saying that what is being offered is too little. Remember, the government has churlishly offered to return only the principal sum collected, and without interest. In the case of Vedanta, the authorities sold its investments held by banks, without obtaining permission from the company to do so. That was a breach of fiduciary practices. The shares could have been worth a lot more today.

Moreover, it is inherently unfair of the government to charge defaulters 12% interest, but should itself become unwilling to pay any interest to those from whom it unfairly collected money.

It will soon become clear if Vedanta agrees to accept the government proposals, or insists on a revision of terms. Whichever way it decides, it will not assuage the worries of the investing community. Such insensitive approaches are suspect. The government has painted itself in a corner through its imperious actions. It must now find ways to undo the damage done.

Without FDI inflows on the one hand, and a falling market on the other, the fate of the government’s own disinvestment programme remains uncertain. More seriously, it might adversely affect the confidence of retail investors who have been offered shares through the innumerable IPOs at unrealistically high valuations. True, a fool and his money must be parted. But do remember that domestic financial institutions (DFIs) also joined the effort to push up market valuations and create a false sense of euphoria to gull common investors. Thus, they too should bear the blame for any financial misfortunes that small investors will experience in an already terrible economic climate.

The government’s failure in focussing on education and healthcare will have horrifying consequences in the coming years. The core of healthcare is the number of doctors. Even the six centres of the prestigious AIIMS are plagued by shortages of key staff. States The Ken, it was “55-83% . . . until 2019. This improved after a slew of contractual appointments. Some compromises were also made—like filling senior level posts with candidates a level lower due to a shortage of suitable candidates. At least four AIIMS still have 40% to 53% faculty posts vacant”. The government must immediately increase the number of seats and for both doctors and nurses by a factor of ten at the very minimum. The need is tremendous, and the focus negligible. Waxing eloquent about Ayushman Bharat can be a cruel joke in the face of doctor shortages.

Similarly, if school education is not addressed, don’t expect economic growth to be sustainable. A nation does not grow economically robust merely by promoting religious chants.

There could be more trouble ahead. Last week, Skymet downgraded Monsoon2021 to below normal. According to its analysis, there are 60% chances of the rains being below normal, at 94% of LPA.