Photo by Vaishnav Chogale on Unsplash
Follow us on

“Just as one plucks fruits from a garden as they ripen, so shall a king have the revenue collected as it becomes due. Just as one does not collect unripe fruits, he shall avoid taking tax that is not due because that will make the people angry and spoil the very sources of revenue,”

“Governments should collect taxes like a honeybee, which sucks just the right amount of honey from the flower without causing any harm.”

Both quotes are from Kautilya’s Arthashastra

The art of taxation – that includes stamp duty or taxes -- involves immense planning to ensure that the avenues for revenue generation also keep increasing. That can happen only when businesses feel confident about doing business in a territory.

If this confidence is eroded, business drifts away. Maybe, those that are already there will take a while to go. But new business seeks out more favourable destinations. Business seeks security, the absence of harassment, confidence in the rule of law – that that contract will be respected; and an abiding faith that businesses will be allowed to flourish. The last is a relative term. If another place offers better conditions for businesses to grow, entrepreneurs will migrate to that territory.

This is what happens to IT professionals who have begun moving to Bengaluru, or Hyderabad, or even Tamil Nadu. Lately, they’ve begun looking to Kerala and even Goa.

These territories have not only invited businesses but have created incentives for them to develop an ecosystem. An IT professional wants people of his own kind with whom he can collaborate. He wants the comfort of lawyers specialising in IT. Of venture capital funds, and of other businessmen who are willing to try out his offerings.

Maharashtra offered such incentives to industrialists once, when they flocked to this state to set up textile mills, spinning units and weaving and processing facilities. The ecosystem in Pune brought in engineering firms. That brought in accountants, lawyers and traders who began specialising in each and every service that specific industries needed, and which in turn would allow them to grow.

Lately, however, Maharashtra appears to be losing its nimbleness. Its avarice is seen in trying to get rich quickly. That scares business away very quickly.

Consider the corrosive influence of the staff of the Shops & Establishments Act, which insist on a bribe being paid to them each year by each establishment. If that money is not forthcoming, a summons to a court hearing is sent, and a great deal of inconvenience follows. People therefore prefer to pay up the bribe than fight it out.

Or consider the impunity with which the state government breaks its own assurances to industry. The entire territory around SEEPZ was created under the MIDC Act. But when the real estate market became lucrative, it was brought under the municipal corporation with higher charges for a variety of things. Ditto with the MIDC at Mahape.

Then take the way the state government has killed nightlife, so crucial to youth. Go to a dance bar, and customers too could get named shamed and defamed, if not actually prosecuted. Prostitution is de facto encouraged with the intention of enabling extortion at the cost of those who most need state protection. Add to that the way the police extort money from couples in gardens or on the waterfront, or even in cars for ‘public decency’. 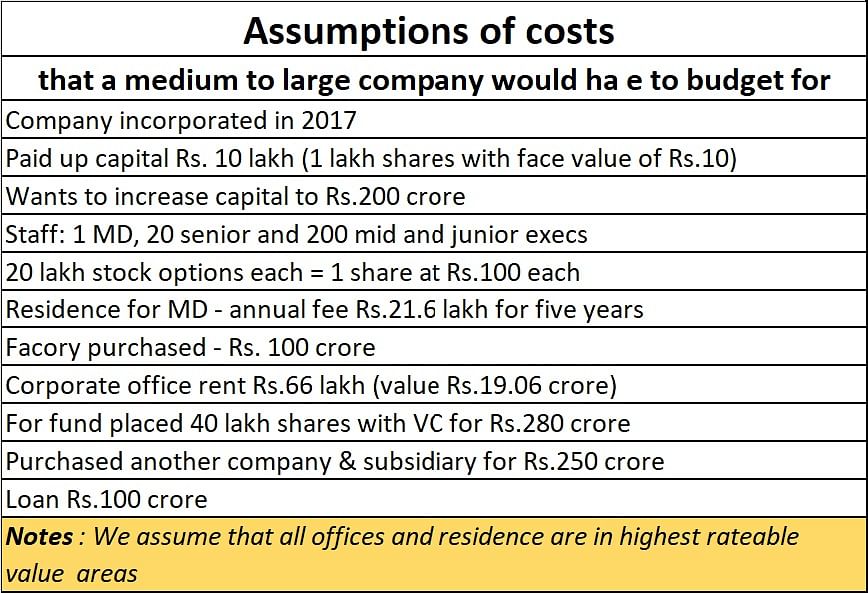 Most of the thriving business centres in the world encourage nightlife, and a nimble enforcement of laws to ensure that there is no lawlessness. The state can learn a lot from Singapore how vibrant nightlife should be encouraged and that it need not lead to crime.

But there are many other factors that appear to be driving business away from the state. Consider for instance the way it levies stamp duty.

To explain this, we have taken a set of assumptions of the things a mid-sized company may need to do to set up business (see chart). And we have calculated just one part of taxation – stamp duty levies – to examine the cost of doing business in this state compared to other states.

Some caveats are required here. First, some of the stamp duties listed in the table can now be paid according to rates decided by the central government for dematerialised (demat-ed) shares. Second, we have not considered the stamp duty that is required to be paid for each commercial contract at the rate of 0.2% of the contract value. That figure could be immensely large. But more on this later.

It is when we look at these numbers, that the gravity of the situation begins to seep in. Maharashtra could be at least 13-14 times more expensive, merely in respect of stamp duties, than say Gujarat or Uttar Pradesh. For some categories, the stamp duty in some states is just Re. 1/-.

Gujarat has been quite successful in weaning away business from Maharashtra. One problem with Gujarat is prohibition on alcohol consumption which multinational corporations detest. This matter has been challenged in courts. Once this deterrent is removed, expect many new investments to move to Gujarat.

As for Uttar Pradesh, the favoured place is NOIDA, which is administered by a CEO, not an elected representative. This is thanks to special tripartite agreements involving the Noida authority, the state government, and the central government. As a result, NOIDA enjoys relatively better law and order than the rest of UP.

While it is also true that many select a state for registration of a company because of many other reasons other than stamp duty, the situation does become quite vexatious when it comes to duties on commercial contracts. 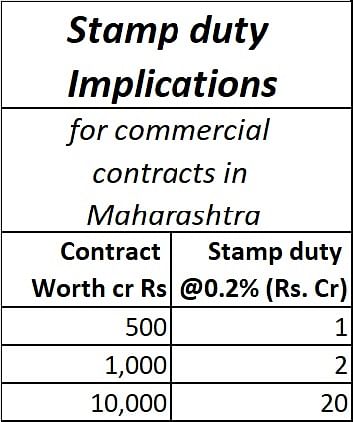 Moreover, there is a legal tangle on how and where stamp duties on commercial contracts are to be paid. In 2019, in Garware Wall Ropes Ltd v. Coastal Marine Construction & Engineering Ltd., the Supreme Court held that an arbitration agreement must be stamped in order to be enforced and that unstamped agreements should be impounded.

In 2021, the Supreme Court reconsidered this issue and in N.N. Global Mercantile v. Indo Unique Flame Pvt. Ltd., the Court concluded that agreements containing arbitration clauses do not, in fact, need to be stamped for the arbitration clause to be enforceable.

The decision in Garware Wall Ropes has now been referred to a Constitution Bench of the Supreme Court.

Irrespective of which way the courts decide, expect savvy businessmen and lawyers to find other ways of executing such contracts to minimize costs and increase certainty of outcome.

Loss of business and employment

And this is where Maharashtra will end up with egg on its face. It is not just the stamp duty on contracts. Once you register a contract in, say, Gujarat, your lawyers and chartered accountants go there whenever there is a discussion on the fine print. Arbitration meetings take place in such locations. That involves travel, hotel stays, cab bookings, restaurants where people dine, and attendant expenses incurred at scores of items as sundry as stationery to the more expensive gifts that people purchase for each other. That in turn affects employment, and revenues that begin to accrue when more people begin working and generating money in any given state.

The proliferation of slums, the shrill cries of reservation for all categories of population, ranging from the Marathas to sons-of-the-soil and scheduled castes and tribes, can also be major deterrents.

And while Maharashtra still continues to register more companies than any other state, the rate at which other states are growing should worry the state’s planners.

Then there are other indicators that should make this states policymakers sleepless nights:

• There are several media reports that indicate that Maharashtra, and, specifically, Mumbai, is losing ground to other States. One big indicator, flashing red, is India’s only IFSC (International Financial Services Centre) located in Gujarat’s Gift City. Another indicator is the country’s only the Gold Exchange.

• Aditya Birla AMC and several aircraft leasing companies have applied for licences to establish a presence in GIFT City.

• Delhi and Bengaluru have replaced Mumbai as the cities with the highest airline passenger traffic.

• Mumbai is no longer a hub to any airline carrier. Even the soon to be revived Jet Airways will shift from Mumbai to Gurugram.

• Bengaluru is now the fastest growing tech hub in the world and the most sought-after destination in India for GCCs.

• The largest world trade centre in the country (and one of the largest globally) is currently being developed in Gurgaon, Haryana.

• Other states in India are also implementing measures to attract business:

While some of the developments listed above are purely on account of political considerations, there are many that have occurred because of high capital and operating costs in Maharashtra and better infrastructure in other States. Linked to that is the terribly debilitating corruption, needless moral policing, and the willingness to abrogate earlier laws under which industrial cities are being planned.

Measures need to be taken to ensure that Maharashtra continues to attract business. One such measure would be to create an IFSC in Mumbai, something that has been at the planning stage for several years now. There is nothing preventing the state for setting up n additional IIFC. It will require deft political manoeuvering, but also immense political will. Finally, it will require the sagacity to understand what Chanakya once said.

The state needs to ensure that fruits are not plucked when they are not ripe, that everything is done to increase yields on trees, and more significantly, that taxes should not pinch. If the government is savvy, the conditions should be such that businesses actually become willing to pay a bit more if the ecosystem becomes a lot friendlier.

Maharashtra needs to wake up, and become desirable all over again. 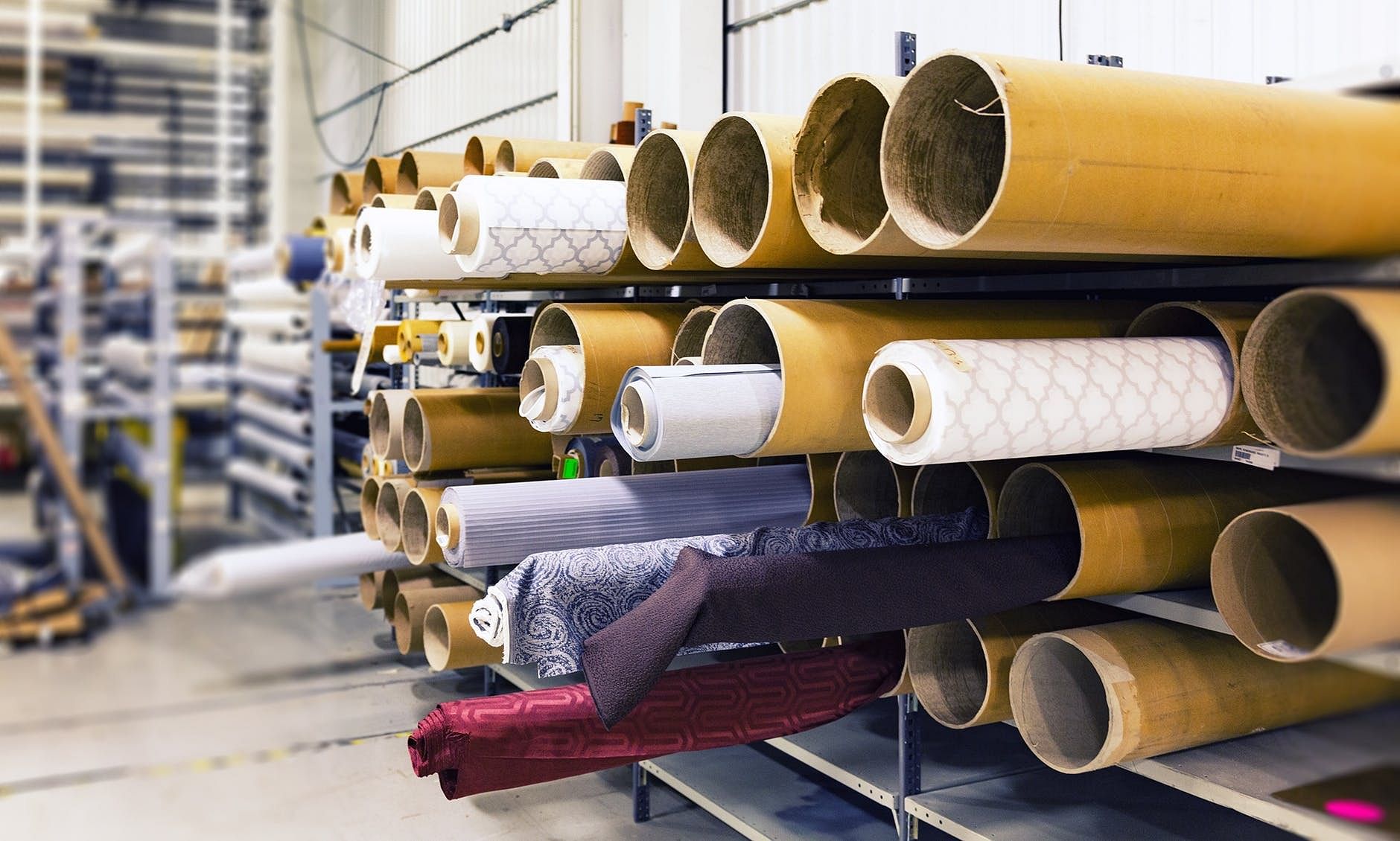