It’s no-go the Yogi-Man, it’s no-go Blavatsky,
All we want is a bank balance and a bit of skirt in a taxi.

It is ironic that one should think of these lines when writing about the RBI. But they are quite appropriate in many ways. The lines were written in 1938, just when financial, social, and military mayhem was being unleashed upon the world (Louis McNeice was one of the war poets known as Angry Young Men).

Today, the RBI is crafting out a series of rules that seem to have the gravitas of a yogi or a Blavatsky. But there is implicit disdain for order. Rules are being given the go-by in favour of expedience. And the danger of playing merry with the powers-that-be could be called ribald, but for graver implications for the entire economy. 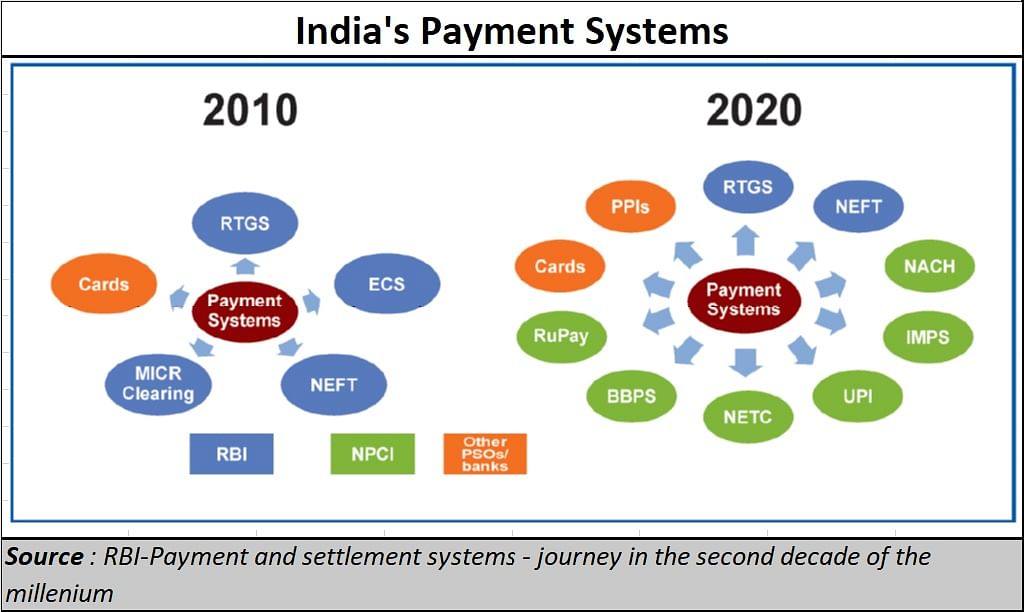 To be fair, the RBI has expanded the market for money (see chart). The growth is impressive. But it appears that systems have not kept pace. Undoubtedly, rules have been introduced. But the ability to stick by these regulations is missing, albeit selectively. The need to stick to rules is often forgotten, or ignored.

Consider two examples that fly in your face. First, take the judgement of the Supreme Court of India which “struck down Article 243ZL, along with Part IXB of the Constitution of India, in its judgement dated 20 July 2021 passed in Union of India Vs Rajendra N Shah matter.” On the basis of this several high courts stayed the execution of an RBI circular which notified several conditions related to urban cooperative banks (UCBs), including the appointment of managing director (MD) and whole-time director (WTD). They also admitted petitions challenging the constitutionality of the Banking Regulation Act 2020.

It does appear that the RBI, in connivance with the government at the Centre, has tried to pass laws that infringe on some of the key cornerstones of the Constitution of India.

Take another matter, which appears frivolous, but is fraught with serious implications. Look at the riotous display of colours and sizes when it comes to Indian currency notes issued in the post-demonetisation years. They violate the convention (possibly a rule) that currencies should bear continuity and similarity with earlier notes. 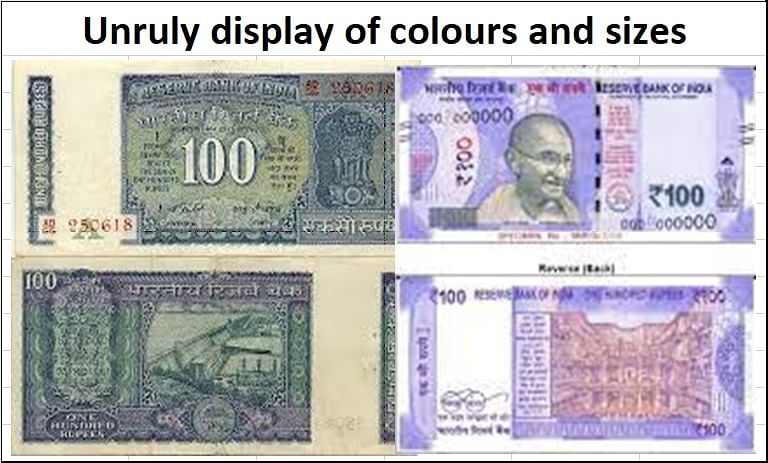 For the past decade, the RBI turned a blind eye to a variety of coins (there are more than five sizes and dimensions of one-rupee coins). You have new 50 paise coins which could get confused with 25 paise coins. Now you have a variety of 50 paise coins as well. In 2016, the RBI had stated that it did not look after coins but only at currency notes.

But, post demonetisation, we have several varieties of Rs.10, Rs.50. Rs.100 and Rs.500 notes (not to mention Re.1 and Rs.2 notes). Is India turning into a tin-pot monarchy? Have all rules been forgotten? Has any developed country shown this riotous disregard for norms and principles governing the issue of currency? Doesn’t the RBI realise that even common folk no longer know which note is genuine? It makes the identification of counterfeit notes that much more complicated. It makes managing ATM machines a bit more difficult. And most of all, it is painfully confusing for visually impaired people.

True, the RBI tries to put on a demeanour of pomposity and seriousness, but all its actions suggest quite the opposite. Hail to caprice. Welcome whimsicality!

The trouble with caprice is that it leaves the road wide open for all types of corruption. The greater the adherence to rules and transparency, the healthier the financial environment will be. In fact, the RBI’s track record on managing corruption at government-owned banks is legendary by now.

Take two other areas where the RBI has created rules which it refuses to implement uniformly. Take the recent case of the tie-up between Google and Equitas Small Finance Bank. Equitas said that it will now enable users to open fixed deposits (FDs) on Google Pay. “Equitas SFB has launched a new initiative, enabling Google Pay users to book fixed deposits (FDs) on Google Pay in under 2 minutes without having to open a bank account," the bank said in a regulatory filing.

This could actually open up banking to huge multitudes, as phones become ubiquitous in India. It could usher in concepts like pigmy accounts – 25 paise deposits – that made Syndicate Bank grow from a small rural bank to one of the 12 largest banks in India. The possibility of satellites (Tatas and Airtel are pushing this aggressively, and so is Tesla) ensures that every hut in every village also gets covered. That will allow for more aggressive moves through phone banking. Nobody denies that the new payment systems have expanded the market in ways unimaginable ten years ago. But there are problems.

For one, RBI has remained silent on the number of bogus bank accounts, on account of a leaky Aadhaar system. India could be sitting on a pile of transactions aimed at pauperising the exchequer. Much more transparency is needed.

Second, as the RBI Governor recently pointed out, even after the Jan Dhan Yojana (JDY)scheme was introduced by the government some years ago, only 425.9 million individuals have JDY accounts, 55% of whom are women. India has a population of 1.4 billion. Even after discounting children, this number does point to the need to rope in the rest into banking services. And we are assuming that all bank accounts are genuine and are not inclusive of duplicate accounts by individuals.

Notwithstanding this, the RBI is uncomfortable. It wants to take a closer look at the Equitas-Google tie up. That is understandable. This is because in its Financial Stability Report (FSR) the RBI observes that Big Tech firms sometimes have “opaque overarching governance structures,” and the potential to become “dominant players in financial services”.

Meanwhile, Amazon too decided to get into the fray. It opted to enter into similar arrangements with wealth management platforms. Kuvera.in said it would provide “its services, products and technology know how to create an exclusive experience for Amazon Pay’s users to facilitate investments into mutual funds, fixed deposits, and more over time”.

But there is a big difference between Amazon and Google. Amazon has a licence for financial service and acting as a payment gateway. The list of parties (dated 23 August, 2021) that have been cleared by the RBI can be found at https://m.rbi.org.in/scripts/publicationsview.aspx?id=12043. You will find Amazon Pay listed among the many entities. But not Google. Yet Google Pay has been operating in the financial market – riding piggyback on PayTM. This was pointed out to the RBI in January 2021. But neither Google nor the RBI has responded to the concerns raised. RBI refused to reply to our email seeking clarification on this score.

· If Google Pay can ride piggyback on PayTM why not Equitas?

· If Google Pay can operate in the financial markets without a licence, why have licensing at all? What happened to the caution advocated in the FSR?

Or is RBI playing the game of caprice all over again?

CIC and other muddles

Take another example. The RBI has rules which require all financial intermediaries to be registered with and cleared by it. Yet we know of companies which have neither an NBFC licence, nor any other RBI clearances. Yet these companies take up lines of credit, and then pass on these to partner-banks. The companies identify borrowers, inform the bank, send the borrowers to the bank after clearing them. The companies also ensure that EMIs are paid regularly to the bank. The loans are given by the bank, the EMIs collected by the bank. And the loans repaid to the bank. The bank is happy, as it gets funds and additional ‘risk-free’ business. The companies make money on the spread between the cost of funds, and the rate at which the partner-banks get the money. Such companies are unregulated, unlicensed but perform a service. But didn’t IL&FS also begin by being an unregulated entity.

Once again, when queried, RBI refused to provide any reply.

Does this mean that rules are meant for every but the privileged few? Isn’t this called a cosy relationship?

Take yet another instance. In August 2020, the RBI introduced "Guidelines for Core Investment Companies”. The entities who had been licensed could raise capital from overseas. To ensure proper governance standards, RBI -- through Clause 5.2 of these guidelines -- insisted that all directors and key officials should be “fit and proper”.

The rules sound right. But RBI’s monitoring isn’t. We come across companies where the office bearers and directors have been indicted by SEBI for insider trading and financial malpractices. So why has the RBI looked the other way? Caprice again?

Each of these instances can be backed up by real names, if the RBI wants them. But in its imperiousness, it chooses not to reply. It chooses not to monitor its own rules. Like MacNeice’s lines, it just wants the money and have a good party with people it likes. Bad luck for the unprivileged.

These are extremely dangerous games. Unless checked immediately, there could be big trouble ahead.

Read Also
Policy Watch: The droning government and its wake-up call for drones