Policy Watch: The droning government and its wake-up call for drones 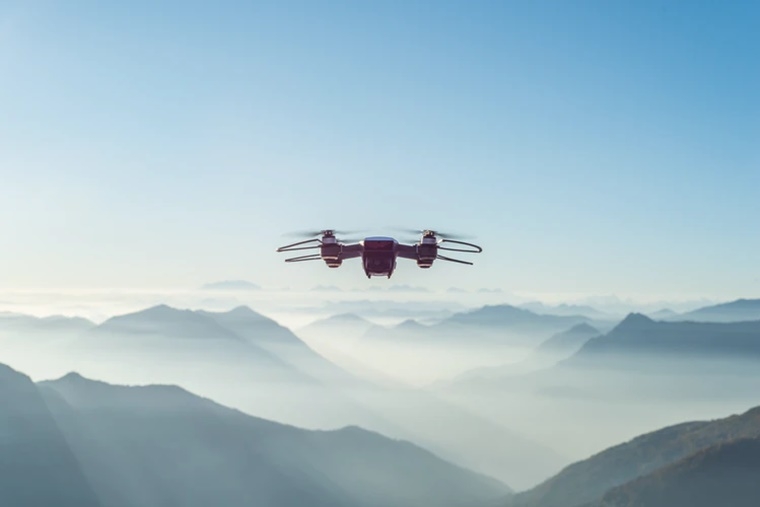 You can always count on the Indian government to do the right thing - after they've tried everything else. (With apologies to Winston Churchill)

Roll back to 2017. That was when this author began telling the government that its policy on drones was half-backed and would leave India at a huge disadvantage – both economically, and militarily. 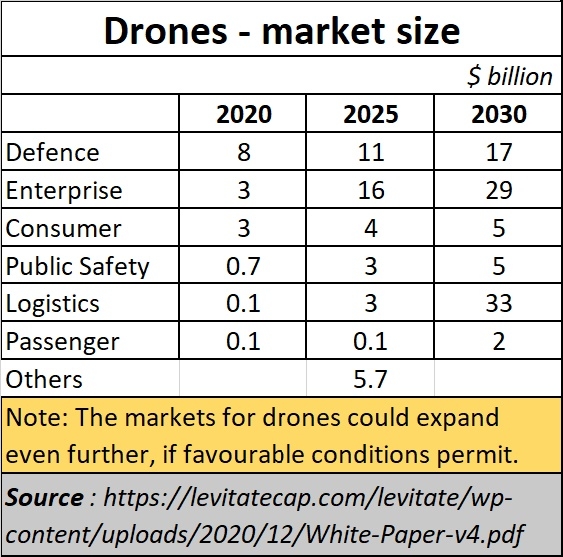 Then move forward to February 2018. The (then) Israeli prime minister, Benjamin Netanyahu, was in India. He then spoke glowingly about a 14-year-old boy who had not only built his own drone but was also amazingly good at identifying objects that the drone’s camera had captured and transmitted to the ground. He was so good at reading these images that Netanyahu told Narendra Modi, India’s prime minister, that the boy represented the spirit of innovation and talent, and that Modi should build an industry around such individuals. What the newspapers did not tell, was that the boy was probably doing all this illegally. The government had banned the use of drones by private citizens. The prime minister must have nodded politely at Netanyahu’s remarks, yet kept silent on India’s reluctance to give drones easy market access.

Till June 2021. That was when India was attacked by drones. It was the moment when the government realised that the solution lay not merely in importing drone identifiers and interceptors, but in creating a huge base of people who could do the rest.

Even if the drones were to be imported, they needed a whole army of people who could perform other jobs. You needed people to navigate the drones successfully.

There had to be people at the backend, who could coordinate the movement of many drones at the same time – more like air traffic controllers, but significantly larger numbers. Then you needed a virtual ecosystem to service, repair and maintain them. Most importantly, you needed a host of experts in the field of graphics – identifying the right types of cameras to take what types of images. The cameras needed for scanning agricultural crops would have to be different from those scanning pipelines. The ones meant to be drone identifiers and interceptors would require even more specialised skills in electronics and surveillance. And after the cameras finished shooting the images, you would need specialists who could interpret the images.

And connecting all these groups together would be an army of software engineers and coding experts, who would stitch man and machine in order to ensure that specific actions were completed proficiently. The employment potential could be mind-boggling. The benefits to trade, government, security, and commerce could be immense. But till this June, the government preferred to sleep over these concepts. It droned on, because wakefulness would involve more work, even headaches.

India has, thus, remained woefully deficient in all these areas. It will take possibly a few years for such skills to get developed – possibly with the help of experts from overseas.

But why did India refuse to permit drones? The response was a typical one. When a bureaucrat or elected representative is confronted by technologies which it cannot understand or control, the first response is to ban them. When a technology gives more power to people, the government’s response is typical. Instead of enhancing the skills of law enforcement authorities and administrators, it prefers to ban them. That is what India does with books, with discussions, with airwaves and even with drones. Till a compelling emergency take place, which puts the very lives of administrators and elected representatives at risk. 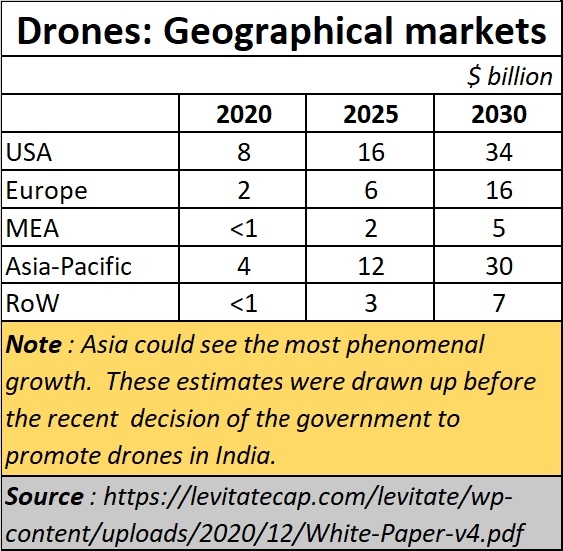 This is what happened in June this year.

However, other similar technologies remain languishing. Till a crisis takes place.

In fact, almost 40 years ago, a diplomat-friend of this author used to clandestinely fly home-developed airplanes making them airborne from the racecourse in Mumbai. He and a group of other enthusiasts would have mock fights in the sky (the way people do with kites. Obviously, some people in charge of law and order were in the know. policemen were in the know. But a wink and a nod and possibly some graft, they turned a blind eye to such infractions. However, they also ensured that such acts remained very limited – not on a scale, and with scope that a country like India needs

Take for instance airwaves. Any scientist knows that allowing people access to a resource free of cost allows mavericks (usually in their teens) to play with the technology, till there is a ‘eureka’ moment. In India, use of airwaves is prohibited unless you have a licence which you pay for. There is no concept of the Citizen Band that students and disrupters can use freely and without cost. Hence innovations in these areas, in India, are limited.

The best analogy which explains why this is stupid is by studying the way the human ear works. Have you noticed how you can hear a friend speak even in the midst of a noisy crowd? The human ear almost intuitively blocks out other sounds and focusses only on the frequencies at which the friend is speaking. The ear filters out ‘noise’.

Now just try recording what is being spoken in that noisy place. Then replay that in your room. You won’t be able to understand what your friend is saying, because all sounds get recorded. There is no filter at work. When you allow free airwaves, people learn to create the right filters, to drawn ‘noise’. Students and geeks also try discovering ways to compress messages into packets so that less bandwidth is used, without loss in transmission. Such innovations get patented and begin to have commercial applications. India loses out on these because it discourages such innovation.

In fact, this is precise what Devas Multimedia – the company which has successfully sued the government for damages in international courts—was trying to do. It was trying to find a commercial application for the S band which was hitherto going unused. Hence wasted. 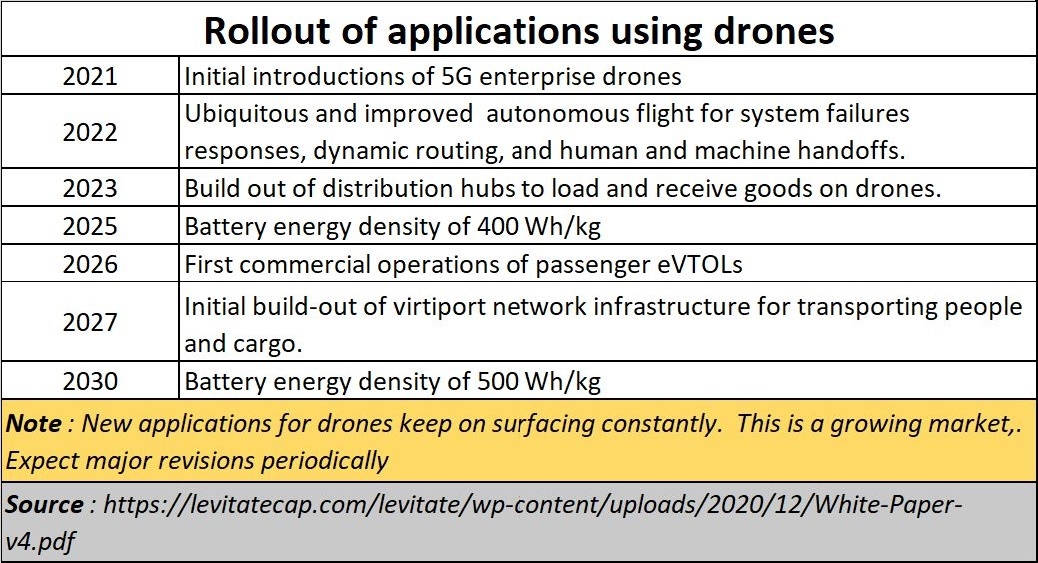 When it comes to killing innovation and enterprise, trust the government and its bureaucrats to opt for bans instead of intelligence and education.

The government was jolted to wakefulness when an enemy drone dropped an explosive device near defence camps. The casualties reminded the government that the next target could be politicians and bureaucrats themselves (remember the way the Iranian General Qaseem Suleimani was killed? The government of India promptly threw out all rules that had prevented people from learning how to operate drones.

It was then, that most Indians came to learn that the global drone market would be worth almost USD 43 billion by 2025. This would be almost double the $22.5 billion size (at a CAGR of 13.8%) that it enjoyed in 2020. As the charts alongside will tell any reader, India could have enjoyed a huge head start, if it had listened to experts and commentators way back in 2017.

It could have accelerated the pace of investments in this sector.

While agriculture, construction and energy have seen impressive rates of growth, there are good reasons to believe that even these growth rates could be dwarfed if India moves into drone use and production in a big way. 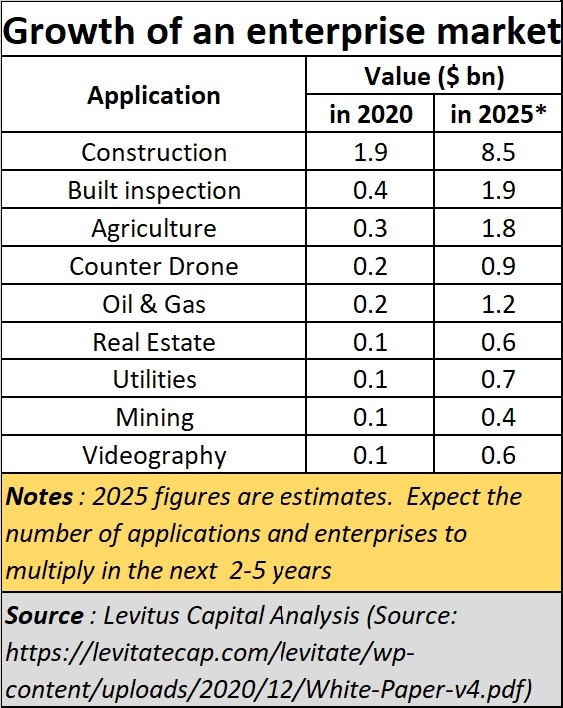 It is quite possible that the transport sector will itself diversify into several other enterprises. Medicare is a good example. Ask medical experts, and they will tell you that drones could begin playing the role of emergency care suppliers along with video graphed instructions for any support person that might be there.

There could be a separate service for high value items like gems and jewellery.

Each of these will be backed by insurance and other features peculiar to the specific industry.

Moreover, all these drones will have to be monitored by some regulator to ensure that they are tracked, and to prevent mid-air accidents.

With more precision agriculture becoming popular, the prospects for drones being used to pinpoint specific plants, even leaves, that need to be attended to will grow by leaps and bounds. This will then be followed by drones for spraying the right nutrients and agrochemicals only on the specific spot, rather than spray an entire region. There is a possibility that agricultural applications may overtake all other enterprises where the use of drones are concerned. With climate change, unseasonal rains and a global demand for agricultural produce that has fewer traces of pesticides, it is quite possible that the market potential for this segment will grow smartly, overtaking even the projected market size for construction.

It will also be in keeping with the general view that commercial applications will drive this industry, not retail consumer demand.

Asia is the future

As in most other market segments, all eyes will be on Asia. Already, global demand forecasts suggest that the market demand in Asia could soon overtake that in the US. 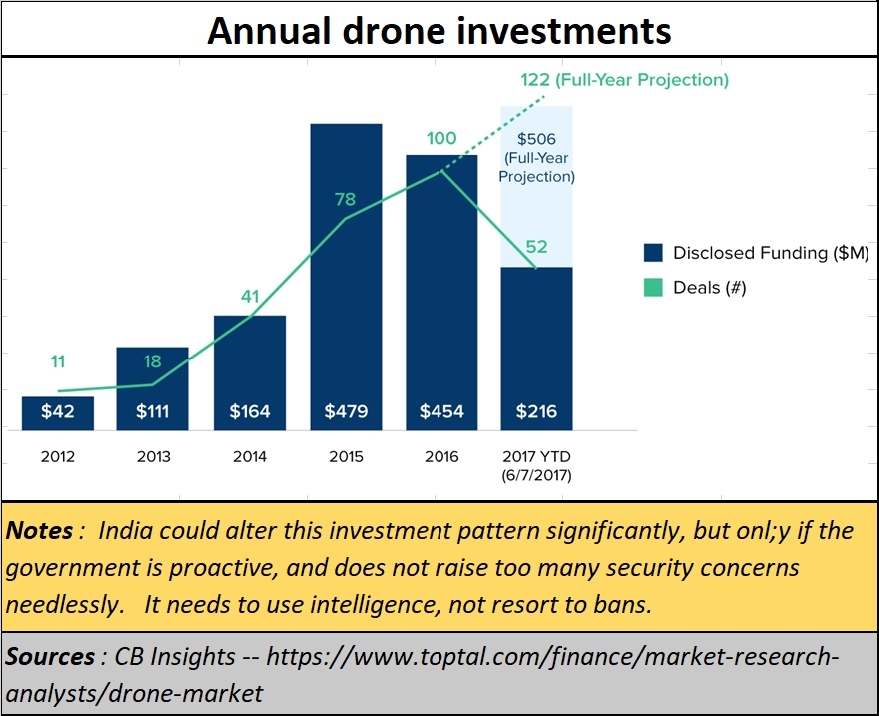 India remains a dark horse. The green signal for domestic production has just been given. It is up to the government to ensure that no further obstacles are put in the way of a domestic market (for producers as well as consumers). At present, agricultural applications in China are racing ahead at a CAGR of over 20%. India clearly has a lot of catching up to do.

In fact, as more pandemics spread across the world, the use of drones may become that much more prevalent.

Here’s hoping that India won’t kill this potential once again.