Policy Watch: Clean up the gold trade quickly, as a national priority

Why should gold be a national priority?

There are three reasons why gold assumes immense significance for the integrity of India’s economic interests and even security.

First, India has been a gold hub for almost 2,500 years. Go back to the records of Pliny in Rome and you will see how noted that India was the primary cause for depleting the coffers of that empire. Indians traded with Rome. They sold it silk, spices, and scented wine among other items. Romans loved Indian spices and the silk (which Indian merchants sourced from China).

The Senate had to urge its women to stop using Indian silks and spices to save their own empire from going bankrupt. The Senate’s appeal did not work. Rome tried to ban imports from India. That didn’t work either. It then debased its currency, hoping that the debased coins (which were earlier minted in gold) would make Indian traders lose interest. That did not work either.

India was the legendary golden bird (sone ki chidiya) because its people knew how to bring gold back to these lands. Even today, as the chart below shows, India is a major consumer of gold. 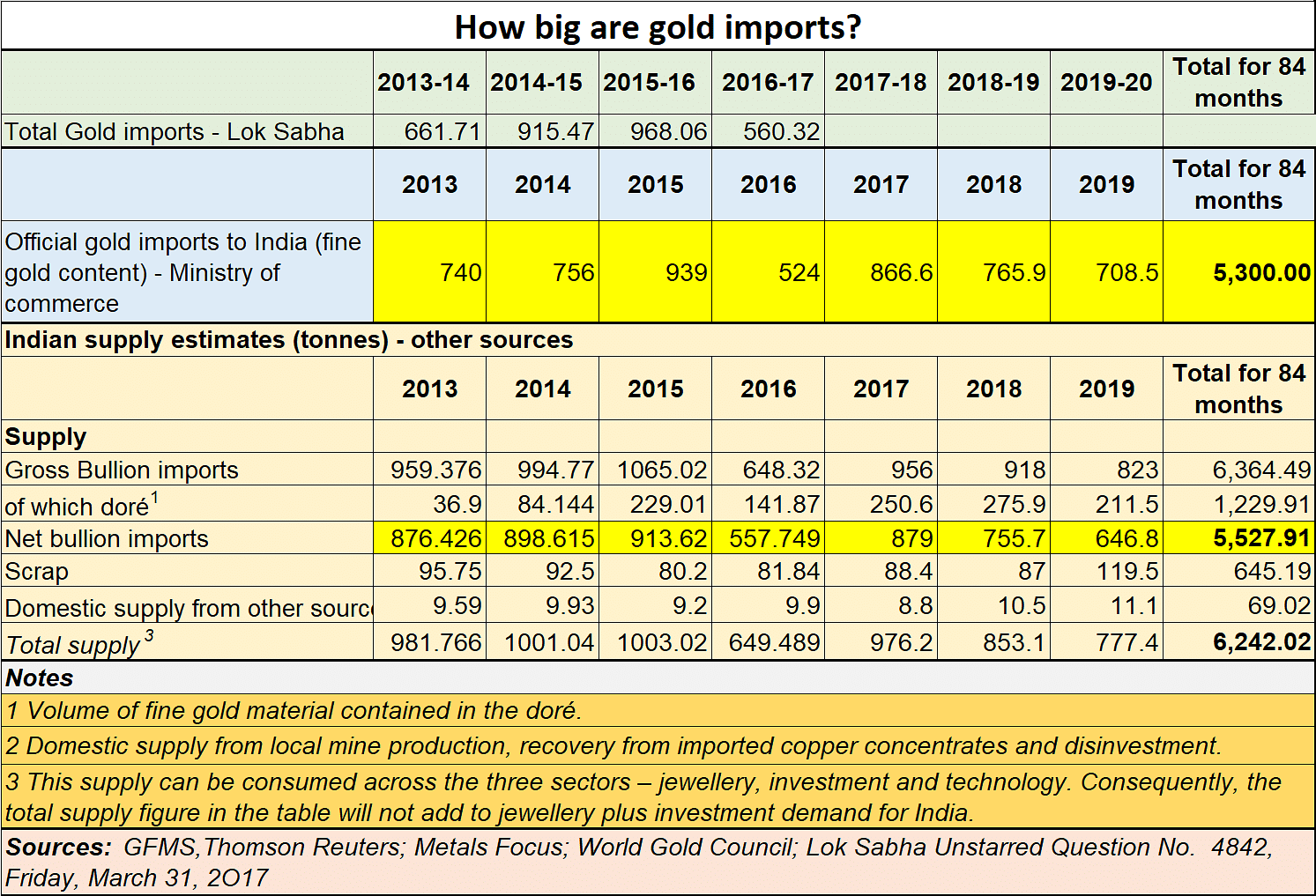 It is the largest (or in some years, the second largest) market for gold. China is the closest competitor to India in this market. When gold is an integral part of the social, religious, and even economic life for most Indians for 2500 years, you cannot wish it away. You must structure laws that take all these in account. You have to respect the trade which has always made India rich, not poor.

Second, any smuggling in of gold must be paid for in dollars which are acquired through the hawala (the illegal foreign exchange and money laundering) route. That undermines the value of the Indian rupee. Since each tonne of gold costs Rs.500 crore, and because 100-200 tonnes of gold are smuggled in each year, the total value of Indian currency involved is at least Rs.50,000 crore. If you don’t prevent this smuggling, expect the Indian currency to get weakened further.

The third reason is more crucial. The smuggling in of gold is so lucrative that it has financed the building of a smuggling corridor which has eased the smuggling in of drugs, electronic goods and even arms. Moreover, while earlier South India – both land and sea routes – accounted for much of the gold smuggled into India, lately it is the east and the North East. Ever since trade was liberalised with Myanmar, and given the porous borders around Bhutan, Nepal, and the North East, more gold, drugs, and arms are being smuggled in from there. Tensions with China have not helped either because no army can afford to alienate the local population that roams through the hills and forests. That should worry India’s policymakers. The fastest way to reduce this is by making the smuggling of gold less profitable.

The cure for gold smuggling will therefore have to be on many fronts.

First, immediately reduce import duties. A 16.36 per cent import duty (inclusive of other cesses) provides a very attractive incentive for gold smuggling where the costs could vary between 5-8%. The longer the 15% duty stays in place, the more the risk to India’s currency and its security.

Second, do not depend on the existing enforcement setup to stanch this clandestine inflow of gold and drugs, and even arms. The focus must first be financial. True, the government will lose Rs.25,000 crore of annual revenues from import duties on gold. But it will save on 10-20 times this amount in trying to deal with corrosion of the currency, degradation of its population afflicted with drug consumption, and the risk of insurrection.

To minimise the cash loss for the government, a simple way would be to keep the import duties at just 1-2% -- provided the gold is imported through designated channels. This channel could be designated banks. Or it could be the gold bourse or the gold exchange that the government has been talking about for years. Such low rates of duty will encourage even international passengers to buy their gold chains and ornaments (even gold biscuits and coins) from India than risk bringing them from overseas. That would legitimise much of gold inflow.

It won’t abolish smuggling – we shall explain why a bit later. But much of the clandestine supply will disappear. Gold can be sold to the trade at a GST of around 3%, and each subsequent sale will involve another 3% on the mark-up value. This way, the government could recoup much of the customs duty that it will forego. It will also have brought more gold out into the open market.

The third step is to remove the inspector raj that annoys the gold trade, and instead focus on technology to usher in traceability of gold. Using well established technologies like blockchain, RFID and unique identification numbers for jewellery – along with hall marking – will go an exceptionally long way in bringing the trade into the open. The absence of an inspector raj will actually allow people to bring out more gold from their lockers into the open markets.

Fourth, have a centralised vault. The current system is almost dysfunctional. Today India allows vaults for the income tax department, the enforcement authorities, the Reserve Bank, and often other banks as well. Keep all gold in vaults managed by a single authority where electronic ledgers, surveillance technology and random batch testing by refineries can plug theft and misuse of gold stocks.

Consider the admission of the government before the Lok Sabha in 2016 (see table below). There have been incidents of theft even from government vaults. This must stop. It is easy to steal gold bars and replace them with dummy bars that are gold plated. The switch can be detected only if there is supervision through cameras and constant random checking of the gold by authorised gold refineries. In this respect, the collaboration between the National Stock Exchange and one of the largest gold refiners in India must be welcome. India’s vaults must also have certified refiners as its partners.

In the long run, India can become a global hub for gold, as in ancient times. The key is to trust trade. Remove ridiculous laws like a ban on round-tripping of gold.

If commodity dealers can be allowed to buy cheap and sell dear, why is the gold trade being prevented from doing this? The government calls this round tripping. That is a wrong application of a term that was meant for corporate funding, and company ownership. It was never meant to be applied to gold. Allow purchase and sale, provided the banks are guaranteed repayment of their loans periodically, and with strict time-bound schedules, coupled with maintenance of proper margins and collateral. If required, such trade could be covered by domestic and global insurance companies as well, preventing banks from being defrauded.

Allow hidden gold to come out, without questions being asked. Just club it to income during the year it is declared. Look at what Turkey did with gold. It allows its citizens to purchase gold from ATMs as well.

Compel all temple gold which is required to be converted into bars to be deposited in the central vaults overseen by the gold regulator or by the RBI. If required give a 1% interest on these gold deposits, and the banks could use this gold as collateral for international borrowings at lower interest costs. Part of the lower interest costs could be passed on to the depositors. This way, gold remains an economic asset in terms of earning annual incomes.

Most importantly, do follow the recommendations of the reports that are lying with the RBI (especially the KUB Rao Report) which talk of the need to have a Bullion Bank and a gold regulator. Given the large volumes, you need to prise gold away from the finance ministry and leave its management to a separate institutional structure.

One the financing of a smuggling channel through profits from gold can be handled, let loose the enforcement authorities to focus on drugs and arms. It will take their attention away from a sector where they have become largely irrelevant – a seizure of just 1% of the amount of gold smuggled in is proof of that.

Obviously, the government will have to introduce new rules to compensate existing investors in gold bonds or gold ETFs the additional money they paid as duties on their investments. One way would be to give them additional gold units representing the value of taxes that were added to the cost of gold some time ago. Or the tax amount could be treated as deposits. Or a tax rebate. But that is an exercise that can be taken up later. It is unwise to make honest depositors feel that the government has been unfair to them.

But the urgent need is to stanch smuggling of gold, and to bring the gold trade into the open. It is time the government created a separate authority for gold – a gold bank, or a gold regulator who could work with the RBI in much the same way ass SEBI, AMFI or IRDAI do. Gold is extremely important to India. The finance ministry must move away from direct handling of policies relating to gold. Create a separate institution instead. Most of all, reduce the incentives for financing smuggling corridors. The sooner this is done, the better for the security and integrity of India. 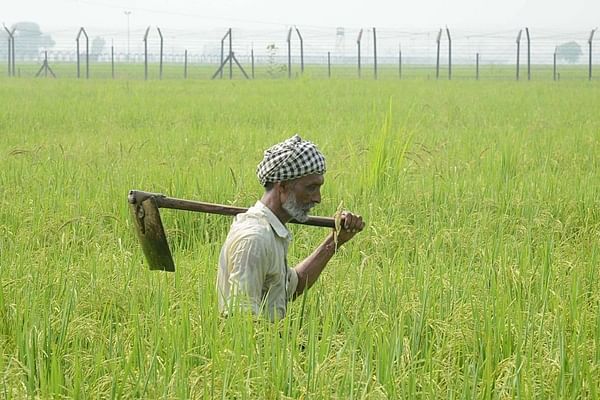 HomeAnalysisPolicy Watch: Clean up the gold trade quickly, as a national priority