India has always been good at coining phrases. They sound impressive. They suggest a caring and concerned government. But that does not find adequate confirmation when one carefully studies policies governing the legal system in India and the marginalization of the judiciary over the past few decades. 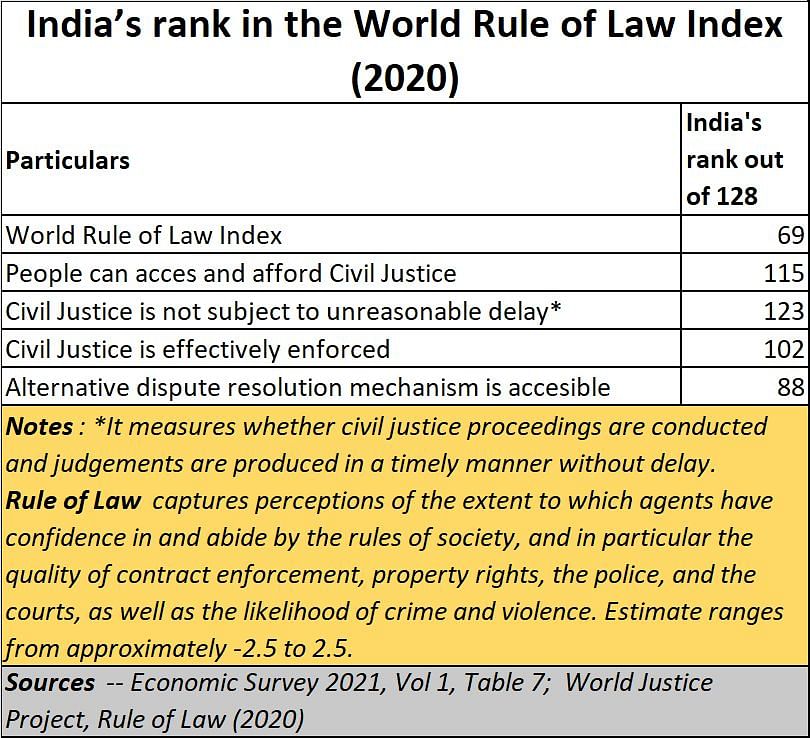 One is thus left wondering if sabka saath, sabka vikas (Universal cooperation and universal prosperity) and atma nirbhar Bharat (a self-reliant India) will also remain mere slogans. The words are there. The intent appears missing.

First, it is not that the government is unaware about this. As the Economic Survey 2021 itself admits, “An effective enforcement system should be able to distinguish the negative outcomes arising due to uncertainties from outright frauds. There is a need for reforms in the legal system in the country has been argued by various Economic Surveys in the past."

In that statement, two things become clear. These concerns have been raised by other economic surveys as well. And yes, there is the usual lip service to the need for reform in the legal system.

How bad the situation is can be gleaned from two sets of numbers. First, take the chart given in the Economic Survey 2021. Out of 128 countries, India ranked 115 on accessibility and affordability of Civil Justice. Its ranking on delays and enforceability were equally terrible. Clearly, the common citizen was the most abused.

Still, India managed to come out with a reasonably better overall ranking of 69 possibly because large companies could manage to get their problems redressed. If you are big and strong, you can get justice, even though it is delayed. If the big guys don’t get justice, they can resort to other methods -- using their home country’s diplomatic clout to resolve issues or approaching international courts for arbitration. Incidentally, it may be mentioned here that India has lost many of the international arbitration cases – the most notable being Dewas Multimedia, Vodafone, and Vedanta. It now plans to challenge all the three.

The rule of law

A second chart is the amount the country spends on its law courts. Once again, India’s focus on ameliorating the law-and-order scene appears to be blunted by other (often political) concerns. India spends precious little on its law courts as a percentage of GDP. 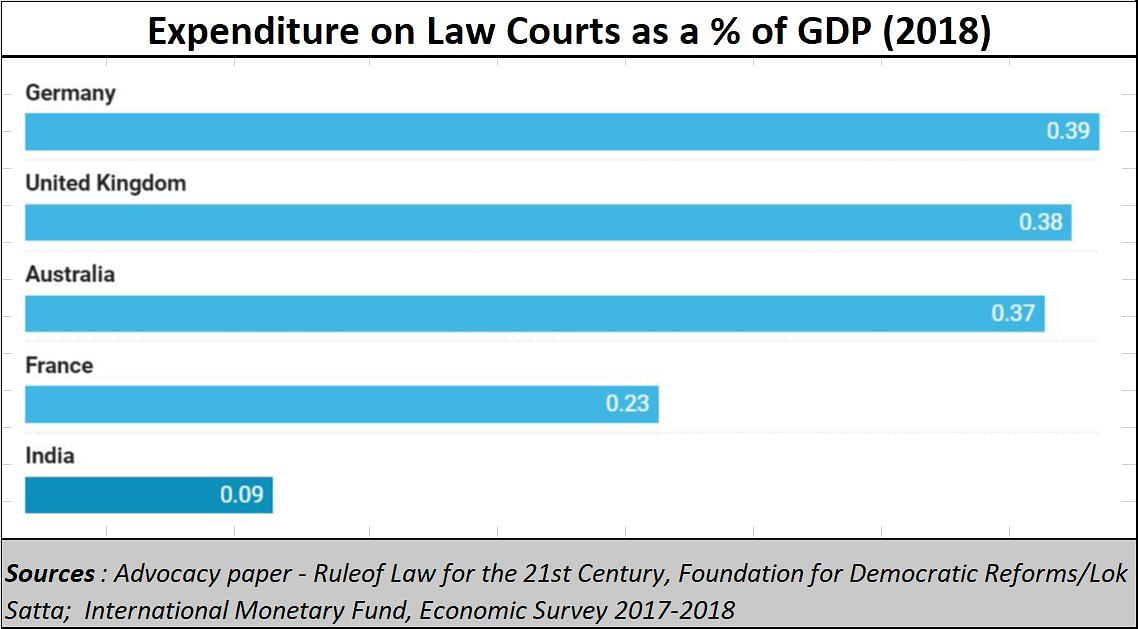 And this is where a pattern appears to emerge. India has ignored spending on each of the three pillars on which any progressive society rests.

The three pillars are easy to identify – Education, Health, and the rule of law. Unfortunately, successive governments, and more painfully this one, have failed to address all the three.

The issue of law is crucial because it is the cornerstone on which a society survives and thrives. Remove laws, then you slip back to a might-is-right scenario that ought to belong to primitive times. Sadly, this appears to be the very direction towards which India is headed. The recourse to short-term measures which encourage vigilantism appears to be becoming quite popular with the government.

Even the former government made a mockery of the rule of law when it promoted salwa judum. Salwa judum was a move to arm citizens and train them to fight against armed Naxalites. 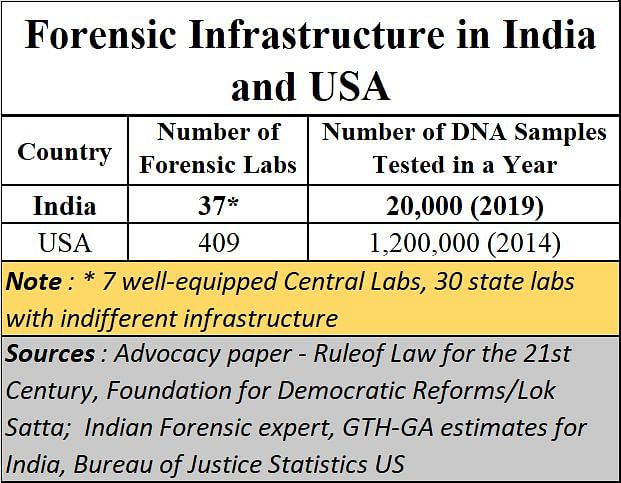 The latter were charged with extortion and worse. So, the former government decided to arm helpless tribals and rural folk. It was finally withdrawn when the Supreme Court passed some stinging strictures against that government. Law and order should not be outsourced to third parties, said the court. Ultimately, it is the government which is charged with maintaining law and order.

In a worrisome development, the present government too has attempted worse strategies.

It has attempted to give free rein to the gau-rakshaks (literally cow protectors) to carry out a political agenda of not permitting cow slaughter. As a result, frenzied mobs took law into their hands, accosted any meat carrying wagon (beat up and even killed transporters). Sometimes, they even attacked farmers taking their stray cattle back home. This too was finally stopped by the courts – after it was confronted with people killed or businesses brutalised savagely. The loss to the economy and to marginal farmers who owned cattle was immense. The government has not yet made any provision to compensate them for their losses.

As a result, India’s already pathetically primitive forensic facilities were often used to determine whether the meat belonged to cows or buffaloes. In most case it was the latter. But by then the meat confiscated was now unusable, and the meat trader lost his income. No compensation was offered for such “collateral” losses either.

There were two other moves that filled citizens with dread.

Strangely enough, the army – which normally does not ever get into proposing social reform -- recommended creating a similar salwa judum movement. A paper put up by the army encouraged unemployed youth to be inducted into the army for a short-term training course. The army proposal suggested that this would help in giving them a sense of discipline.

Were the top guns of the army and the home ministry unaware that such a move could create a movement like that of the brown-shirts (of Germany) in India? Fortunately, the proposal was quietly buried. While other authors of social media views have got arrested for any such ‘unwise’ views, nobody in this case was arrested or even upbraided for such outlandish and dangerous suggestions.

Then, just recently, the home ministry proposed involving citizens to report on misuse of social media and other anti-social crimes. The ‘circular’ said that such an experiment would “be piloted in Jammu and Kashmir and Tripura”, where volunteers would “flag and report child sexual abuse, rape, terrorism, “radicalisation” and “anti-national” activities. The government was effectively trying to pit citizen against citizen.

Once again, it was trying to sub-contract law enforcement to private hands, which could be both undesirable and dangerous. Once again, the government was caught trying to slip in extra-legal ways to deal with inconvenient people.

This is certainly not the rule of law.

The sheer disdain successive governments have shown towards the rule of law can also bee seen in the poor expenditure on this front. This includes the police, the courts, and the rest of the law enforcement machinery. 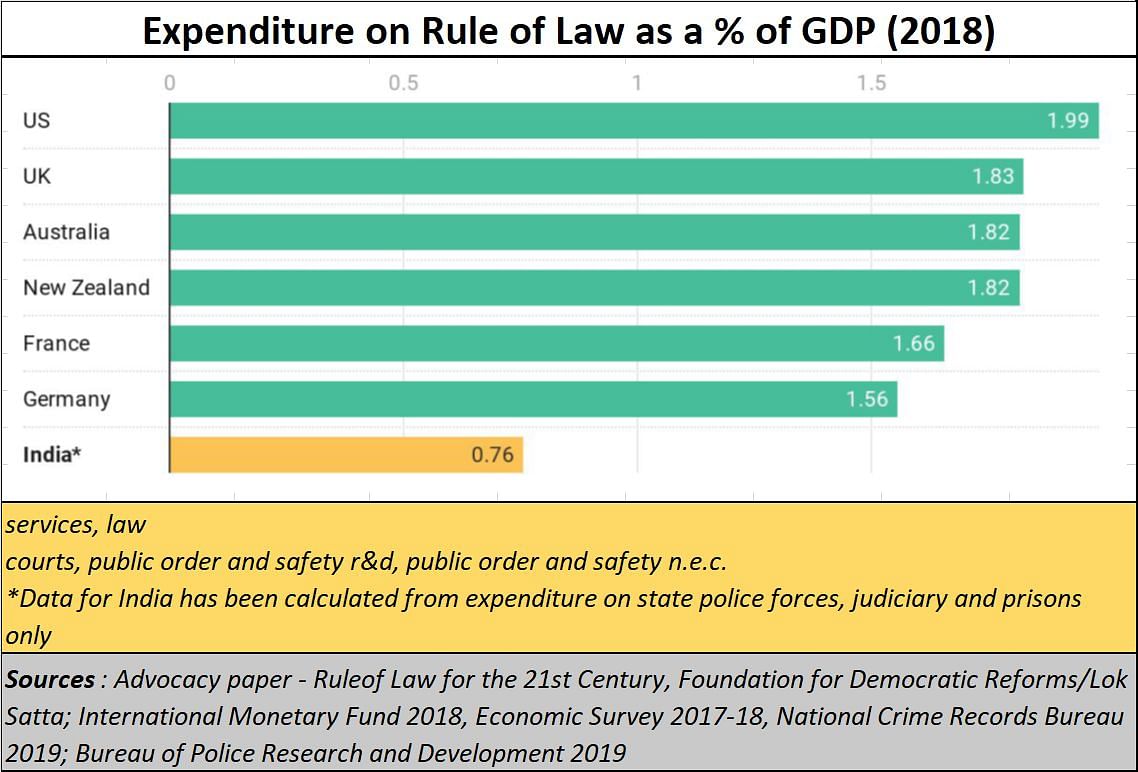 But why have the legislators abdicated their responsibility. Aren’t they supposed to create the right laws to ensure that everyone upholds the rule of law? To understand the disdain many legislators have for the rule of law, one must go back to 1969-70.

It was then that Indian legislators began to realise that they could dictate terms to the courts as well. That would effectively tilt the balance of power in the favour of legislators. The Constitution had envisaged all three wings– the executive, the legislature, and the judiciary -- being equal. Developments in 1969-70 threatened this balance. Thus, over the decades, this led to a situation when legislators have learnt to create laws to break laws.

As Indira Jaisingh, noted lawyer, once pointed out, using the law to break the law would eventually push the entire country towards lawlessness.

The year 1969 is when Indira Gandhi, former prime minister, decided to abolish Privy Purses. She lost the case. To understand why he wanted to abolish the Privy Purses please go to Game India a book penned by this author.

But she waited. Then in 1970, fresh from her triumph in the Bangladesh war, and armed with the huge political clout she needed, she changed the composition of judges in the Supreme Court. She then proposed the motion once again to abolish privy purses, won the case, and the rest is history. For more on this case, read Soli Sorabjee and Arvind P. Datar, Nani Palkhivala: The Courtroom Genius, available at Amazon .

India, thus, learnt to overturn past promises with impunity. It was witness to the way even a constitutional guarantee (to the erstwhile princely states) could be abrogated. India had learnt to use laws to break laws.

The legislature’s appetite for retrospective laws too grew, and one of the most obnoxious pieces of legislation is the amendment to the Foreign Currency Regulations Act (FCRA) in March 2018. That allows political parties to get foreign funds with no questions asked, with retrospective effect for 42 years.

Add to that the introduction of contentious legislations like Aadhaar, the Citizenship Amendment Act (CAA) and more. Together, they have pushed India to the brink of a constitutional crisis. You have absurd situations when companies are hauled up for foreign exchange violations, but political parties cannot be. NGOs have been forced to down shutters because of a vexatious application of foreign exchange laws, even while the linking of Aadhaar to PAN cards – as demanded by the government -- could pave the way for a mammoth money laundering opportunity.

Another controversial move is the proposal to allow remote voting from anywhere. That could further extend bogus Aadhaar cards to a manipulation of electoral rolls at a scale that cannot be imagined.

Welcome to an age when the government has learnt to create laws to break laws.

Fortunately, the judiciary appears to have woken up from its listlessness. Watch the way it released all the tablighis who were maligned for spreading COVID-19 and for violating immigration rules.

Similarly listen to the strictures the courts passed in the Disha Ravi case.

Observe how the Supreme Court finally stepped in and ordered NCLT not to proceed in the Future-Amazon case.

Hopefully, the courts will intervene more forcefully henceforth. Hopefully, they will become more active in weeding out corruption among members of the judiciary. After all, law remains the last bulwark for any civilised society. If that bulwark collapses, the floodgates will also break. Some of the disturbing signs of this breakdown will be discussed in the next article.