This is the first time disapproval for a governor’s utterances has come publicly from Union Home Minister Amit Shah, when several NDA appointees have had run-ins with chief ministers belonging to the opposition parties. That Shah chose to send the missive in the first-ever interview he gave after his recovery from Covid-19 has not gone unnoticed.
Shekhar Iyer 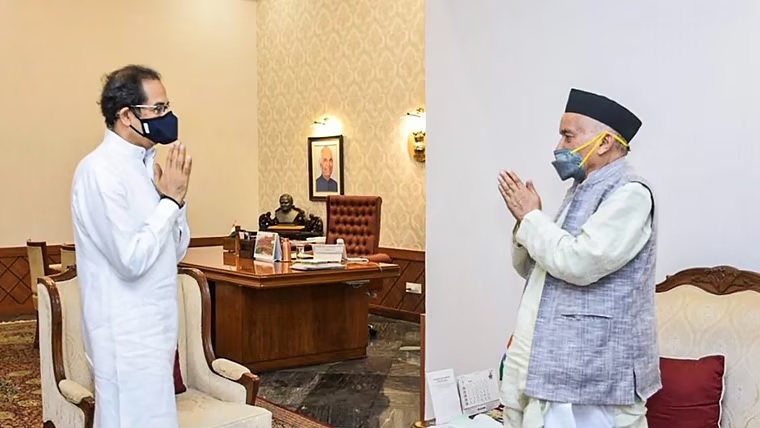 Union Home Minister Amit Shah’s disapproval of Maharashtra Governor Bhagat Singh Koshyari’s choice of words in a communication with Chief Minister Uddhav Thackeray — on the issue of opening up of places of worship — has opened up the possibility of resetting ties between the Centre and the states.

This is the first time disapproval for a governor’s utterances has come publicly from Shah, when several NDA appointees have had run-ins with chief ministers belonging to the opposition parties.

That Shah chose to send the missive in the first-ever interview he gave after his recovery from Covid-19 has not gone unnoticed because it has also signified that the Narendra Modi government may itself be in a mood to repair its relations with the opposition-ruled states.

It is no coincidence that Shah’s statement came soon after the Centre sought to bring down the curtains over meeting the shortfall in the GST revenue collections. It was a departure from the Centre's earlier stance that the states should undertake market borrowings to bridge the ₹1.1 lakh crore of GST compensation shortfall this year. Now, it has expressed willingness to undertake the required borrowings in tranches and pass these on to the states as a ‘back-to-back loan’ that will reflect on their own books.

The move is seen as a way to break the impasse between the Centre and opposition-ruled states over the issue of borrowings to recompense the latter, with consensus remaining elusive despite extensive parleys over three meetings of the GST Council.

Given this scenario, Shah choosing to signal a new approach by not only distancing but expressing disagreement with the governor’s remarks could mark a new beginning in governor-chief minister relations as well.

Since Prime Minister Narendra Modi took office in 2014, many governors appointed by his government have been at loggerheads with non-BJP governments. They have stood accused of acting to further the political interests of the BJP in their respective states and seeking to undermine elected chief ministers belonging to the opposition parties.

On their part, many governors like West Bengal's Jagdeep Dhankar, who has had issues with Chief Minister Mamata Banerjee since his appointment in July 2019, have raised the ante over the occupants of the respective Raj Bhavans being denied even basic courtesies.

In the case of Koshyari, he has had more than his quota of controversies, beginning with the early morning swearing-in of Devendra Fadnavis and Ajit Pawar as CM and deputy CM a year ago, followed by the subsequent, swift collapse of the hurriedly sewed-up arrangement. This had raised serious questions about the conduct of the Raj Bhavan.

However, once the Maha Vikas Aghadi government took office with the coming together of the Shiv Sena, the Nationalist Congress Party (NCP) and the Congress under Uddhav Thackeray, it appeared that the governor and the CM were willing to settle for a stable, if not a very cosy relationship.

But, with Maharashtra seen to be struggling to bring the ongoing Covid-19 pandemic under control and the “unlocking” or easing of restrictions in a phased manner, raising questions about what to open and what to keep shut, the governor chose to wade into another row.

Everyone knows that the unlocking has been a matter of consternation even among the ruling partners, particularly after liquor shops and bars have got greater priority in opening up for revenue reasons— notwithstanding the fear of spread of the disease.

Koshyari sent the controversial letter to the CM in response to an announcement made by Uddhav Thackeray on October 11, that the government would not open religious places because of the risk of Covid-19. He taunted the CM and Shiv Sena president, questioning if the latter had “suddenly turned secular”, by refusing to open up the places of worship.

Chief Minister Thackeray had to retort that he did not need certificates of Hindutva from the governor, even as his predecessor and BJP leader Devendra Fadnavis, rose to Koshyari’s defence. NCP chief Sharad Pawar too wrote to the Prime Minister, objecting to the language of the letter. Given this background, Shah went on record to state that Koshyari could have chosen his words better.

Naturally, many political analysts have sought to read a bigger objective in Shah’s rather soft approach (compared to his earlier avatar as a tough-talking BJP strongman) for reasons due to realpolitik. Some have read it even as a sign of anxiety in the BJP because it has lost allies one after another despite the huge mandate of 2019. The possibility of a political realignment in the future cannot be ruled out. If this is the case, the governor could be the scapegoat and expendable, according to them.

Already, Pawar has noted, it is up to Koshyari whether to stay on in the post or resign. Pawar also stated that “a person with self-respect may step down”. Shiv Sena MP Sanjay Raut has appreciated Shah’s response, saying that, as the country’s home minister, he has spoken with responsibility and caution.

Nevertheless, even if Shah’s remark is an exceptional case of disapproval of a NDA-appointed governor, it does hold out a big message to all occupants of the Raj Bhavan. Many of them have given an impression that they are under pressure because their political loyalties override their constitutional obligations. It would be good for them to now introspect whether they should actually be seen to be interfering in a day-to-day issue of governance when the matter is clearly in the domain of the elected government.

For all you know, the Centre, which appointed them, does not always expect them to function as its political agents— though they have obligations to be vigilant to see that the state governments do not cross the line.

True, the Constitution empowers the governor to ask for information on administrative matters from the chief minister. After all, every governor knows that, as the constitutional figurehead of the state, he is to act on the advice of the council ministers though he is not constrained from proffering advice to the CM in office.

With more vacancies to be filled, some Raj Bhavans are likely to see new faces. The Centre is likely to fill the positions for Madhya Pradesh and Goa, where the governors of Uttar Pradesh and Maharashtra, are holding additional responsibility. Karnataka and Jharkhand Governors Vajubhai Vala and Draupadi Murmu, respectively, are on extensions.

A relatively new governor like Arif Mohammad Khan of Kerala, has shown that he has managed to have a better working relationship with Marxist CM Pinarayi Vijayan after initial spats with him about the Citizenship Amendment Act.

Perhaps, that is the way forward—even if political roles of governors are not bound to end soon because of the nature of the polity.

The writer is a former senior associate editor of Hindustan Times and political editor of Deccan Herald, New Delhi.