With a growing current account deficit, as well as external trade deficit, economic wisdom may prevail. It could begin with a reversal of the ban on futures trading

The government makes tall claims about protecting the farmers, and ensuring that agriculture remains vibrant. Such claims are quite enticing and appealing, till the cynic decides to scratch below the glitz. That is where the actual story turns out to be quite different.

The government wanted to introduce -- with huge fanfare -- the three sets of farm laws which it said were good for farmers. That resulted in one of the biggest farm uprisings that this country has seen. Government spokespersons tried to smear the farmer leaders with epithets like traitors, anti-India, terrorists and more. Finally, it had no option but to submit to the farmers’ demand to repeal the laws.

The funny part is that neither the government spokespersons, nor even the farmers, really understood the laws completely. These columns attempted to do this. 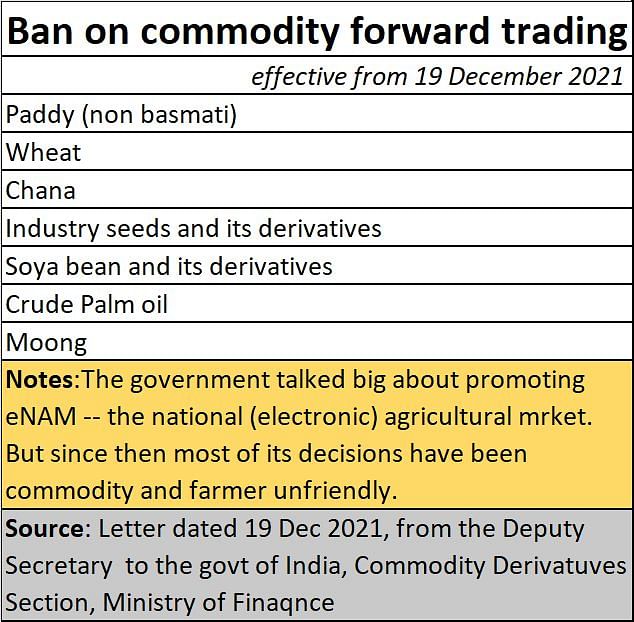 The government has the hammer

The ironies then began unfolding before wide-mouthed market watchers. The government had promised to do away with limits on storage and artificial borders. Suddenly stocking limits were put into place. The excuse given was invariably the same – the government wanted to control speculators.

It refused to consider the fact that any runaway prices in futures trading can easily be controlled through two measures – first by insisting on deliveries, ad second through margins (which can be calibrated) for futures trades.

The government did neither. It just imposed a ban. When someone thinks he has a hammer, every problem looks like a nail.

Then came the decision to import edible oils. All along, the government had been told that import only depresses prices for growers. That makes them shun that crop during the next season creating a fresh round of shortages. That in turn gives the government an excuse to allow further imports. A country which used to depend on barely 20% of its edible oil requirements, now imports over 80%.

As for reducing consumer prices, through import of cheaper imported edible oil, that turned out to be the biggest joke. Global suppliers increased their prices, and that in turn made domestic players also increase their prices The result was higher prices than what existed when imports were allowed. Surely, the mandarins of the agriculture and commerce ministers could not have been unaware of this.

A similar pantomime was played out in respect of pulses as well. 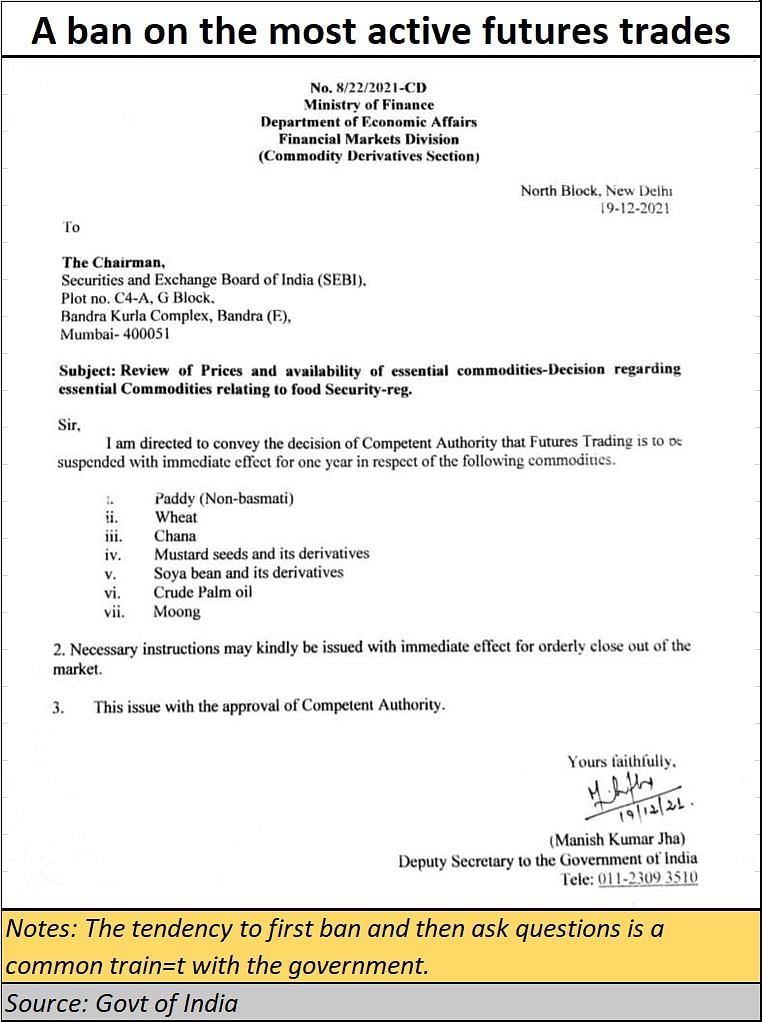 Then take commodity exchanges. On 19 December 2021, well before the Russia-NATO-Ukraine conflict, the government brought out an order banning forward trade in seven commodities. These were some of the most actively traded items on commodity exchanges. They served as a price indicator for farmers for the next cropping season. The excuse, once again, was food security, availability of such crops etc.

As is increasingly becoming customary, the issue was not discussed in Parliament. Nor was a discussion initiated either with the major players in the agricultural space, or with farmer representatives. If you have a hammer, every problem becomes a nail, right?

But were prices becoming volatile? Was there excessive speculation? Not really. The numbers do not bear out the government’s claim. Studies show that the standard deviation of the future prices are lower than the spot market indicating that futures contracts on the commodities are helping in better price discovery thus mitigating the price risk.

It was once again the shoot-first-ask-questions later syndrome that government officials were often accused of. The source of the data used for analysis are NCDEX futures prices and NCDEX Spot Polling prices for spot data. Various statistical tests such as augmented dickey fuller test, Johansen Cointegration test, and OLS for hedge effectiveness were carried out by a group of researchers. The idea was to find the relationship between spot and futures prices, and to explore the possibility of hedging the commodities using futures.

There is yet another indicator that should be considered. It is the inter-day average trading range (ATR) for spot prices in commodity markets. The average true range is an indicator of the price volatility of assets over a specific period. A high value of the ATR indicates high volatility of the market price of the assets and a low value implies low price variations. The time period used for this analysis is 01/Jan/2019 to 02/Jun/2022.

Interestingly, the ATR of RM Seed, Soyoil and Soybean increased considerably whereas the ATR of chana decreased after the ban of the futures contract. Clearly, the ATR does not indicate all round speculation.

Overall, if these and other market indicators are considered, it also becomes evident that the volatility of spot markets increased after imposing the ban for the essential commodities except for Soybean.

The Spot prices and futures for all the commodities in the study are highly co-integrated and there is a long run relationship between the spot and futures. 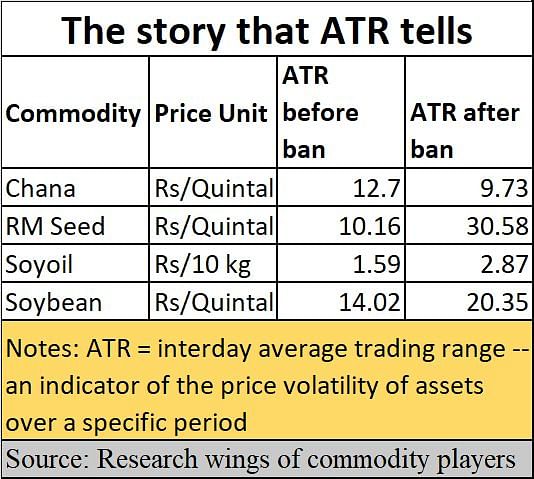 Roll back the ban

A good hedge effectiveness and hedge ratio has been observed between spot and futures market, which shows a necessity of futures market for the commodities eventually for price risk mitigation.

There is yet another serious issue that policymakers should be worried about. The reluctance to let the commodity markets discover future prices, has made farmers more dependent on the government instead. This is obvious from the demands for minimum support prices (MSP). As a result, even though India is surplus in many types of grain, farmers continue growing them, assured of high prices. That in turn causes much of the grain to rot in godowns. A better strategy would have been to let commodity markets reflect the market risk, and educate farmers on which crop to grow.

That would allow for two benefits. It would reduce the role of the government in agriculture, allowing for market driven agricultural decisions (except for some critical crops where the government may want to offer incentives to spur growth). Second, it would make farmers move away from crops (like wheat) where India already has surplus production. A commodity market led future pricing would do the trick, with a bit of government push as well.

That, in turn could result in a bigger benefit – making the rural community more prosperous, which in turn would push up the per capita GDP and galvanise the entire economy. It is wise to remember the saying that for the wat of a shoe, the kingdom was lost.

In fact, letting FPOs create a safety net for farmers through market pricing might be a very good idea. Another idea whose time has come (is actually overdue) is banning agri imports, and letting farmers benefit for a short while, and thus boost domestic production.

But politicians like to pander to vote banks, and rural communities remain the largest vote bank that they have. It is unlikely that common and economic sense would be easily allowed to triumph over political considerations. But with a growing current account deficit, as well as external trade deficit, economic wisdom may prevail.

It could begin with a reversal of the ban on futures trading. 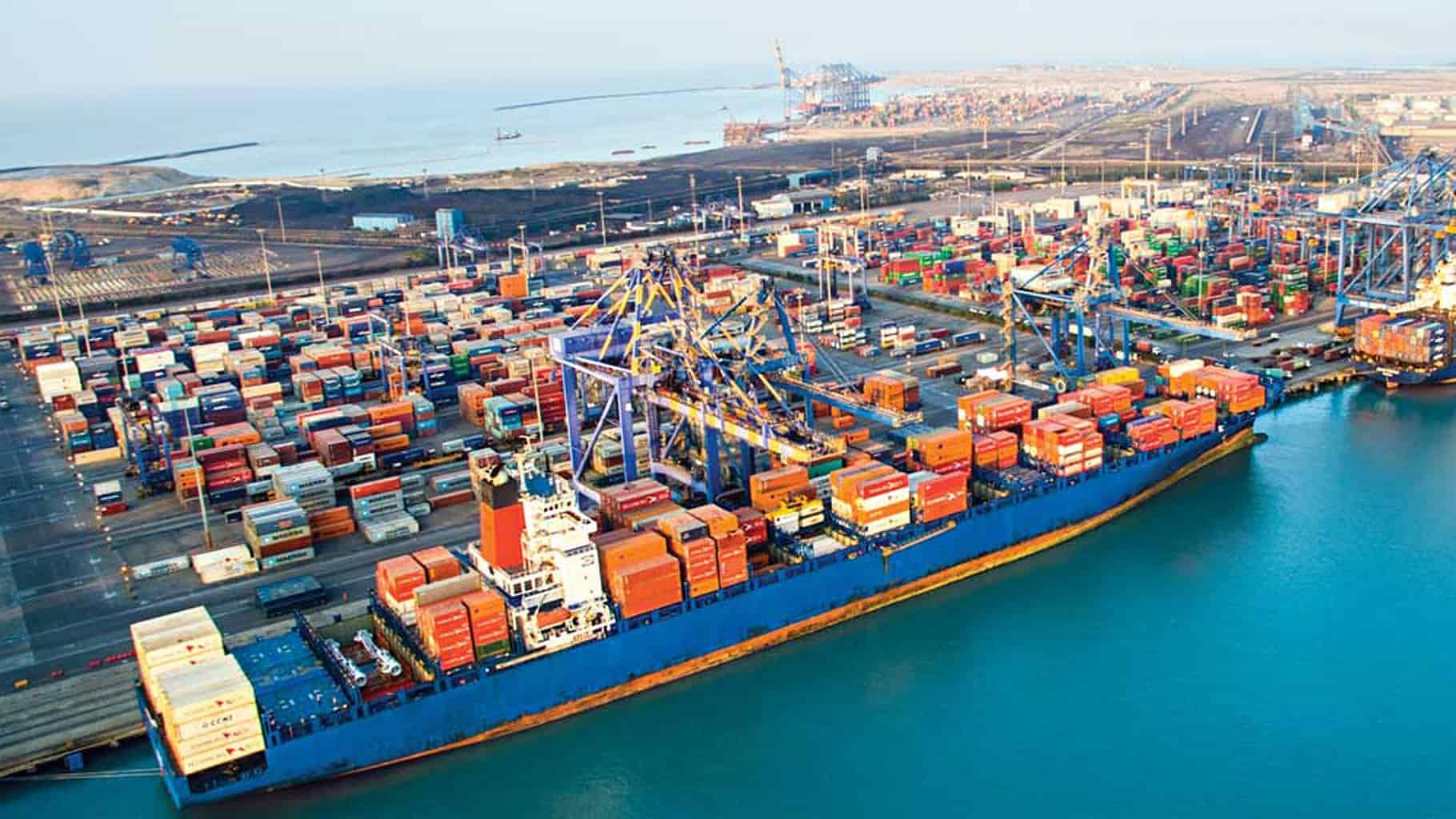