What is 'Florona' disease? The double infection reported in Israeli woman What is 'Florona' disease? The double infection reported in Israeli woman |

The newspaper pointed out that the infection of the “double disease” was recorded in a woman who entered this week to the Rabin Medical Center to give birth.

According to doctors, the young woman, who is not vaccinated, is in good health and is expected to be discharged later on Friday, according to “Russia Today”.

Israel is witnessing a wave of influenza infection, as Israeli hospitals have so far treated 1,849 patients with it last week, according to the Center for Disease Control and the Israeli Ministry of Health.

Ministry of Health has begun to study this case with its relatively mild symptoms, in an effort to uncover the repercussions of the combination of the two viruses and their impact on the human body. According to doctors, many people may have contracted two viruses and have not yet been diagnosed.

It's a double infection of the COVID-19 virus and influenza virus. This is the first ever case of such disease reported since the start of pandemic in March 2020.

The influenza virus, in turn, can cause severe symptoms such as pneumonia, myocarditis, and sometimes even death.

Data from the Center for Disease Control and the Israeli Ministry of Health warned of the spread of this infection, especially after hospitals reported treating 1,849 patients with complications of the disease during the past week.

As for the symptoms of “Florona”, the data indicates that it may cause the emergence of a full range of severe symptoms, including pneumonia and other respiratory complications and myocarditis, which poses a risk of death in the absence of medical care.

Accordingly, the Ministry has made a recommendation that individuals from the age of six months receive the influenza vaccination that can be given with the Corona vaccine safely.

The role of immunity in the face of “Florona”:

According Dr. Nahla Abdel Wahab, consultant for bacteria, nutrition and immunity at Cairo University Hospital, said that in the event of a breakdown in immunity, it is possible to develop severe competitive symptoms and inflammation of the heart muscle, according to the symptoms of the influenza virus, accompanied by symptoms of Covid 19, noting that the meaning of the two viruses entering the human body, this is the biggest evidence of the collapse of his immunity.

The nutrition and immunology expert at Cairo University Hospital stressed the importance of adhering to the precautionary measures and speeding up to receive the vaccine, for those who have not been vaccinated so far, explaining that the new “Florona” virus is rapidly spreading, advising all owners of chronic diseases to quickly go to the competent doctors to follow up on their personal condition. 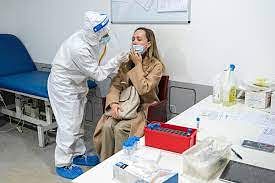