Watch Video: Weighing 8,000 kg, elephant from Tanzania believed to be largest in world

Satao was an African elephant that lived in Tsavo East National Park, one of the largest wildlife parks in the world with a large population of elephants.
FPJ Web Desk 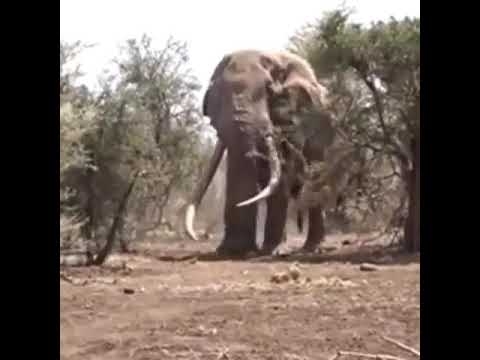 Weighing approximately 8000 kg, an elephant from Tanzania is believed to be the largest in the world. In the latest discovery in the size of elephants, a Tanzania elephant (name unknown) is now being said as the largest existing elephant that could be in the world.

The shows a huge elephant roaming in the jungles of Tanzania, the video was posted on social media by Indian Forest Service officer Susanta Nanda.

Previously there have been two elephants who have grown bigger and weighed bigger than this one.

African elephants are the largest land animals in the world today. The largest African elephant ever recorded was found in Angola, rocking in at a massive 24,000 lb (11,000 kg), with a shoulder height of 3.96 meters (13.0 ft), and being at least a metre taller than the average male African elephant.

Satao came to be known as one of Kenya's largest African elephants. He was known as a tusker because his tusks were so long that they almost touched the ground. The Tsavo Trust announced that Satao was killed by poachers using a poisoned arrow on 30 May 2014.

Satao was an African elephant that lived in Tsavo East National Park, one of the largest wildlife parks in the world with a large population of elephants.

According to the World Wildlife Fund, the African elephant is the largest of all elephant species and weighs up to eight tonnes with a height that ranges between 8.5 feet to 13 feet.

The African elephant has two subspecies with various differing characteristics - the savanna and the forest elephant. These elephants can be found in eastern and southern Africa, with the highest densities found in Botswana, Tanzania, Zimbabwe, Kenya, Zambia, and South Africa.