While responding to the conspiracy to assassinate the premier was mentioned in the letter, Vawda said that there was a threat to the Pakistan PM's life but remained evasive.

Pakistan Information Minister Fawad Chaudhary on Friday said that the securities agencies of the country have reported a 'plot' for the assassination of Pakistan Prime Minister Imran Khan.

"After these reports, the prime minister's security has been beefed up as per the government's decision," he was quoted as saying by the Pakistan newspaper Dawn. Earlier this week, The Pakistan Tehreek-e-Insaf leader Faisal Vawda also made similar claims that there was a conspiracy developed to assassinate the Pakistani PM over his refusal to "sell the country".

While responding to the conspiracy to assassinate the premier was mentioned in the letter, Vawda said that there was a threat to the Pakistan PM's life but remained evasive.

He further said that Khan was advised to use bulletproof glasses during his rally at Islamabad's Parade ground. "But as always and as usual, he said my [death] will come when Allah wills. Don't worry about it," Vawda was quoted as saying by Dawn.

This news comes a day after the Pakistan PM said that a foreign nation sent a message that he needs "to be removed" or Pakistan will face consequences.

"A foreign nation sent a message to us (Pakistan) that Imran Khan needs to be removed else Pakistan will suffer consequences," he said.

"The United States", Imran Khan said in a slip of the tongue and then stated that "a foreign country" had sent a "threatening memo" which was against Pakistan.

"On March 8 or before that on March 7, the US sent us a...not the US but a foreign country sent us a message. The reason why I am talking about this...for an independent country to receive such a message... this is against me and the country," he said.

Imran Khan said the memo was against him, not against the government. "...it stated that if the no-confidence motion passes, Pakistan will be forgiven, if not, there will be consequences."

Responding to such allegations, White House Director of Communications Kate Bedingfield on Thursday (local time) denied the allegations regarding Washington's role in an alleged "foreign conspiracy" to oust him from power. "There is absolutely no truth to that allegation," Bedingfield told reporters. 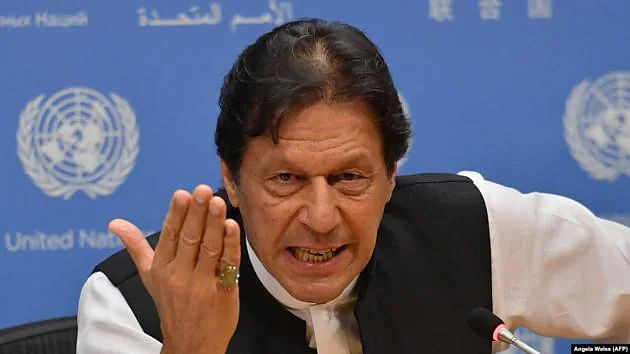