Palestinians and rights group often accuse Israeli troops of using excessive force against Palestinians, who live under a 55-year military occupation with no end in sight

Tires set fire by Palestinians burn at the site where two Palestinians were shot and killed by the Israeli army in the Jalazone refugee camp near the city of Ramallah, West Bank, on Monday, October 3 | AP
Follow us on

The military alleged that the men tried to ram their car into soldiers, a claim that could not be independently verified.

Palestinians and rights group often accuse Israeli troops of using excessive force against Palestinians, who live under a 55-year military occupation with no end in sight. 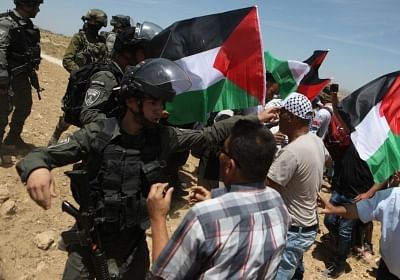 The Israeli military said soldiers were attempting to arrest a suspect in the Jalazone refugee camp near the city of Ramallah when the two Palestinians allegedly attempted to run over soldiers with their car. The soldiers opened fire on the car, the military said.

The Palestinian Civil Affairs Authority, which coordinates on civilian issues with Israel, said the military shot and killed the two men. Their identities were not immediately known.

A day earlier on Sunday, figures compiled by the BBC claimed that at least 100 Palestinians had been killed in the occupied West Bank and East Jerusalem so far this year, following an escalation of tensions between Israelis and Palestinians that has been described as a 'mini-Intifada'.

Israel has been carrying out nightly arrest raids in the West Bank since the spring, when a spate of Palestinian attacks against Israelis killed 19 people.

The Palestinians see the nightly incursions into their cities, villages and towns as Israel’s way of deepening its occupation of lands they want for their hoped-for state.

On Saturday, an 18-year-old man was shot dead in East Jerusalem on Saturday. That came after an incident earlier in the week which saw Israeli forces reportedly firing an anti-tank missile at a house in Jenin that killed a wanted gunman and three others.