The Chinese government, however, claims that the camps are merely vocational and training centers, and that they’re teaching people job skills

Thousands of photographs from the heart of Chinas highly secretive system of mass incarceration in Xinjiang, as well as a shoot-to-kill policy for those who try to escape, are among a huge cache of data hacked from police computer servers in the region.

The Xinjiang Police Files, as they're being called, were passed to the BBC earlier this year.

After a months-long effort to investigate and authenticate them, they can be shown to offer significant new insights into the internment of the region's Uyghurs and other Turkic minorities.

Their publication coincides with the recent arrival in China of the United Nations Human Rights Commissioner, Michelle Bachelet, for a controversial visit to Xinjiang, with critics concerned that her itinerary will be under the tight control of the government.

The cache reveals, in unprecedented detail, China's use of "re-education" camps and formal prisons as two separate but related systems of mass detention for Uyghurs,and seriously calls into question its well-honed public narrative about both, the BBC reported.

Foreign Minister Wang Yi met Michelle Bachelet in the southern city of Guangzhou on Monday as she started a trip that is the first to China by a U.N. high commissioner for human rights since 2005.

Her six-day, fact-finding visit is focused on allegations of abuses against Muslim minorities in the northwestern region of Xinjiang, but rights groups fear her visit will help whitewash the abuses.

China locked up an estimated million or more members of Uyghur, Kazakh and other Muslim minorities in what critics describe as a campaign to obliterate their distinct cultural identities.

China says it has nothing to hide and welcomes all those without political bias to visit Xinjiang and view what it describes as a successful campaign to fight terrorism and restore order and ethnic cohesion.

In 2020, researchers from the Australian Strategic Policy Institute, using satellite imagery and other evidence, have documented more than 380 re-education camp detention centers and prisons in Xinjiang.

It is the largest mass internment of an ethnic-religious minority group since World War II.

The concentration camps are the most extreme example of China’s inhumane policies against the Uighurs, but the entire population is subject to repressive policies. China has used mass surveillance to turn Xinjiang into a high-tech police state.

Uighurs inside and outside the camps are exploited for cheap labor, forced to manufacture clothing and other products for sale both at home and abroad. The New York Times revealed in July that some Chinese-made face masks being sold in the United States and other countries were produced in factories that relied on Uighur labor.

The Chinese government, however, claims that the camps are merely vocational and training centers, and that they’re teaching people job skills. It has justified the oppression in Xinjiang as an attempt to clamp down on terrorism and extremism emanating from the Uighur separatist movement.

There have been incidents of violent unrest over the years, including a few deadly terrorist attacks, and at least one Uighur extremist group in the region, the East Turkistan Islamic Movement, has ties to al-Qaeda and the global jihadist movement.

But most experts say Beijing’s repression and subjugation of millions of Uighurs is vastly disproportionate to the comparatively minor terror threat in the region.

China’s ruling Communist Party allows no political opposition and strictly limits free speech, along with rights to assembly and religious expression. China is also one of the five veto-wielding permanent members of the U.N. Security Council and has signed but not ratified the International Covenant on Civil and Political Rights administered by Bachelet’s office.

Read Also
China announced sanctions on US officials over Xinjiang 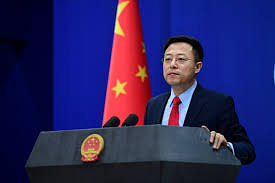