G20, not G19: Despite Western pressure, Russia unlikely to be expelled from G20

While Russia has been rendered a pariah country by Western states, it will remain part of the G-20 and associated organizations unless member countries achieve a consensus that it should go

President Joe Biden, bottom left, poses with other leaders for the family photo of the G20 summit at the La Nuvola conference center, in Rome, on Oct. 30, 2021 | AP

The last time Russia invaded Ukraine, in 2014, outraged world leaders booted Russia out of the Group of Eight industrialized nations, which quickly rebranded itself the Group of Seven.

Eight years later, the G-7 is still holding at seven — a collection of countries that meet to talk through big issues like trade, economics and security.

This past week, as global leaders gathered in Washington for spring meetings involving officials from the International Monetary Fund, World Bank, G-7 and the larger Group of 20, it quickly became apparent that despite Russia’s ongoing assault on Ukraine, its membership in the G-20 remains firmly intact.

While Russia has been rendered a pariah country by Western states, it will remain part of the G-20 and associated organizations unless member countries achieve a consensus that it should go. That appears less and less likely, as several countries, including China, Brazil and South Africa, have made clear they will support Russia’s membership in the G-20, which represents industrial and emerging-market countries.

Discord over Russia's presence at the meetings has been on display all week, with officials from the U.S., Canada, Britain and other Western countries staging walkouts three days in a row whenever Russian officials spoke.

The G20 finance ministers and central bank governors, who met in Washington on Wednesday, failed to agree on its traditional communique outlining economic policy goals as Russia blocked strong language condemning its invasion of Ukraine.

"Russia does not have a place at the table of countries who have come together to maintain global economic prosperity," Freeland said, adding Russia has violated longstanding international rules with its invasion of southern Ukraine. "You can't be a poacher and gamekeeper at the same time."

Indonesia is “in consultation” with other members of the G20 amid growing calls for Russia to be barred from the economic forum’s November summit in Bali.

Some members of the intergovernmental group of 19 countries and the European Union have been threatening to boycott the event if Russian President Vladimir Putin and delegates from Moscow are allowed to attend, leaving Indonesian President Joko Widodo, who is better known as Jokowi and holds the annual presidency this year, in a potentially fraught position.

Indonesia was a founding member along with countries including India and Egypt of the 1961 Non-Aligned Movement (NAM) – a forum of 120 nations that were not formally aligned with or against any main power bloc during the Cold War.

The spirit of NAM continues to inform Indonesian foreign policy, which maintains what it calls a “bebas-aktif” approach to international affairs – an “independent” stance and an “active” role in global governance.

Jakarta has so far maintained that it still plans to invite the leaders of all 20 members to the summit.

On Thursday, former Foreign Minister Marty Natalegawa told Australia’s The Age newspaper that Indonesia should invite Ukraine to the summit not only to appease the concerns of those who have threatened to boycott the event, but also to make the most of a “precious opportunity” to bring an end to the conflict and address its economic consequences.

The Indonesian government has said that it will continue to consult with G20 members and other stakeholders on the issue.

The dispute at the IMF meeting highlighted the problems that government leaders are likely to face in Indonesia in November, when G-20 leaders are set to gather in Bali. President Joe Biden has called for Russia to be kicked out of the group, but the U.S. has not said whether Biden would boycott the gathering if Russia participates.

The U.S. and Canada have been the biggest critics of Russia’s membership.

U.S. Treasury Secretary Janet Yellen and Canadian Finance Minister Chrystia Freeland were among a number of officials who walked out of a Group of 20 meeting Wednesday when Russia’s representative started talking.

Freeland later tweeted: “This week’s meetings in Washington are about supporting the world economy — and Russia’s illegal invasion of Ukraine is a grave threat to the global economy. Russia should not be participating or included in these meetings.”

But several countries, including China, Brazil and South Africa, have been vocal about rejecting measures to remove Russia. They’ve argued that engagement is more important than isolation in troubled times.

“To expel Russia would only isolate it and make it more difficult to achieve constructive engagement,′ said Clayson Monyela, a spokesman for South Africa’s Department of International Relations and Cooperation. “South Africa believes it is more useful to keep Russia in and to engage with it to find the lasting peace that we are all yearning for.”

South African President Cyril Ramaphosa has blamed NATO for the war in Ukraine.

Brazilian Foreign Minister Carlos França told a news conference in Brasilia that excluding Russia “doesn’t help us find a solution to the immediate problem that we have,” which is the need to cease hostilities and have Russia and Ukraine negotiate a lasting peace.

Chinese Foreign Ministry spokesperson Wang Wenbin said last month Russia remains an “important member” of the G-20 and no member has the right to expel another.

The G-20 should “practice genuine multilateralism, strengthen solidarity and cooperation, and work together to address outstanding challenges in the areas of economics, finance and sustainable development,” Wang said.

While President Biden has said Russia should no longer be in the G20, ejecting Moscow would require the support of all members. That is considered unlikely, as neither China nor India have said they would back kicking Russia out.

Read Also
US and its allies try to boot Russia out of G20: Reports 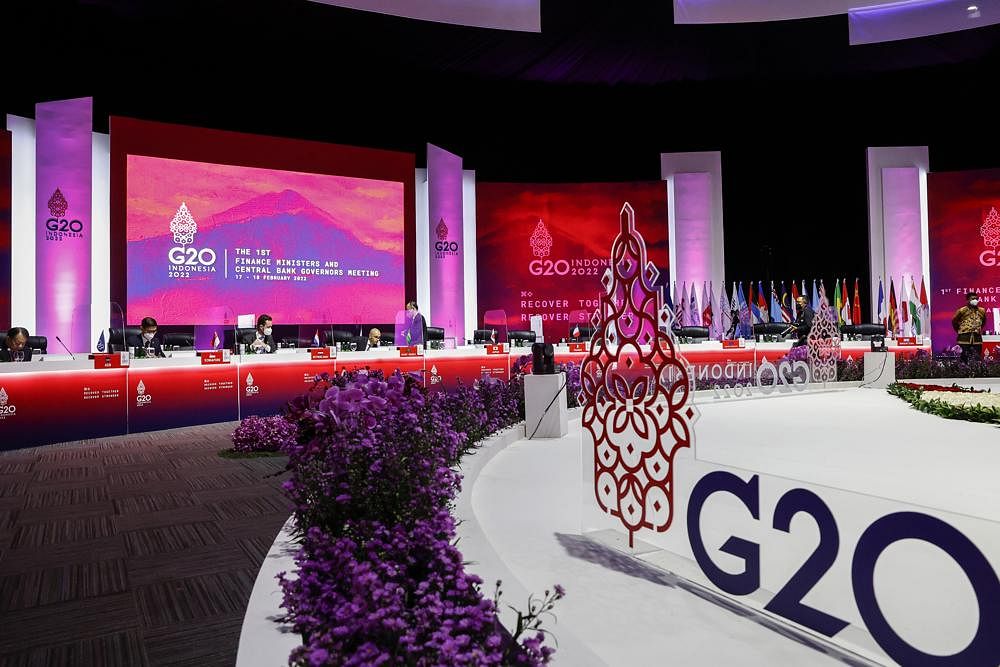 HomeWorldG20, not G19: Despite Western pressure, Russia unlikely to be expelled from G20