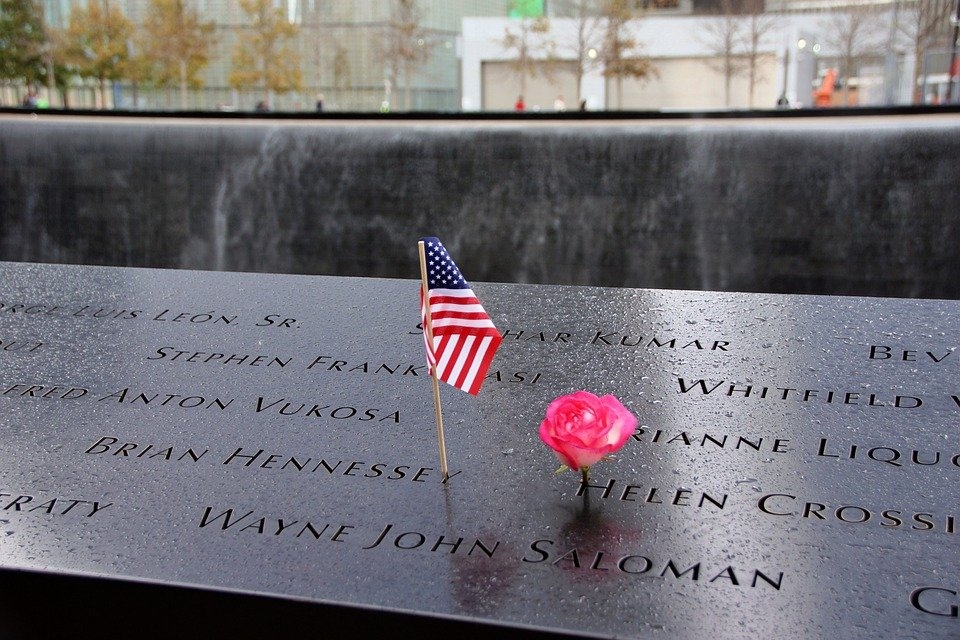 The 9/11 attacks were one of the most horrific acts of terror in the history of the United States of America (USA). Around 3.000 people were killed and countless others injured after a group of 19 terrorists- associated with the extremist group Al Qaeda- hijacked four US passenger planes and carried out a series of suicide attacks against different targets in the United States.

Two of the planes were flown into the iconic twin towers of the World Trade Center in New York City's Manhattan, the third hit the Pentagon outside Washington D.C, while the fourth plane crashed into a field in Pennsylvania.

As the infamous day fades deeper into history, we take a look at how the Free Press Journal reported on the incident, twenty years back. 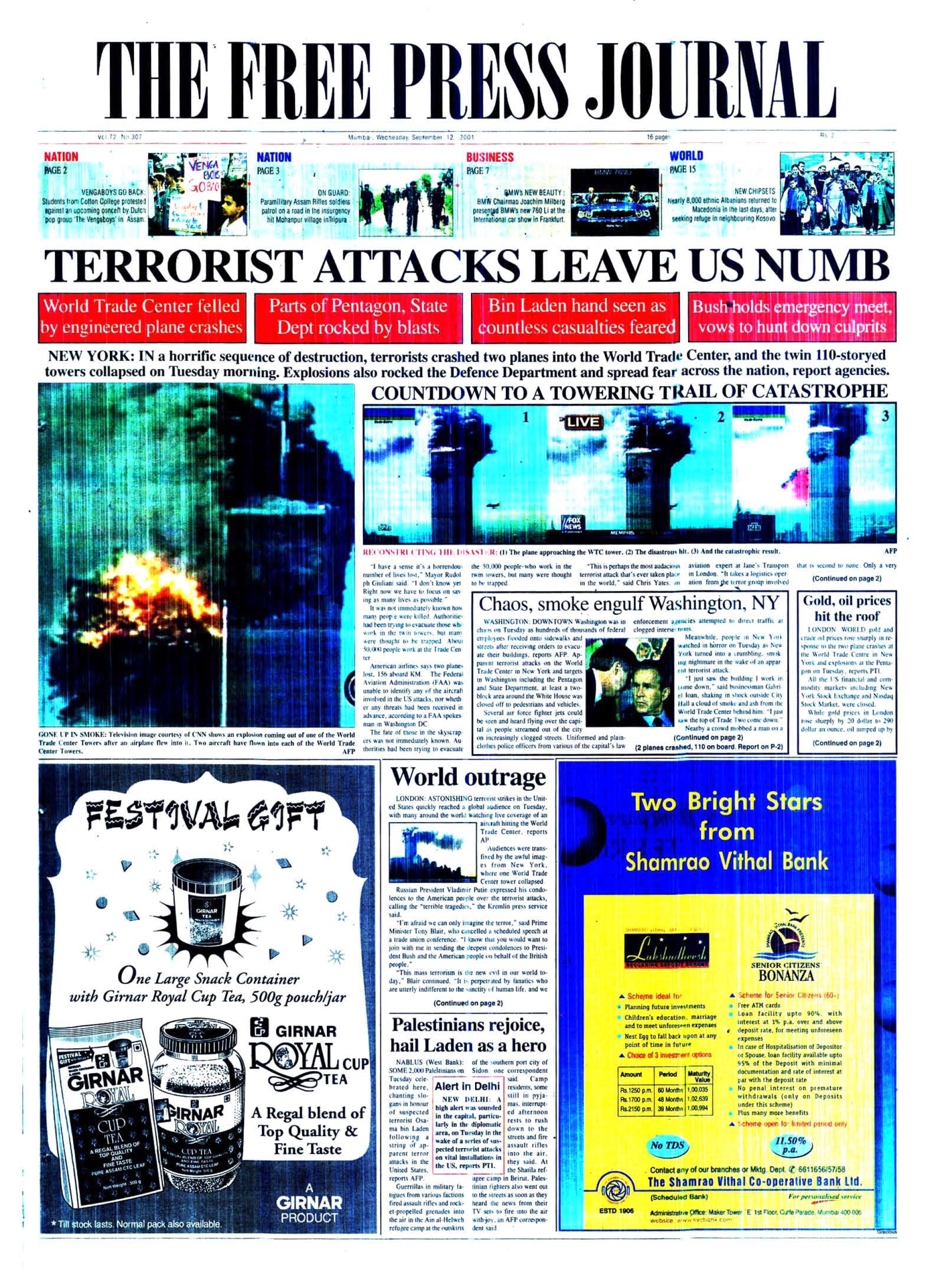 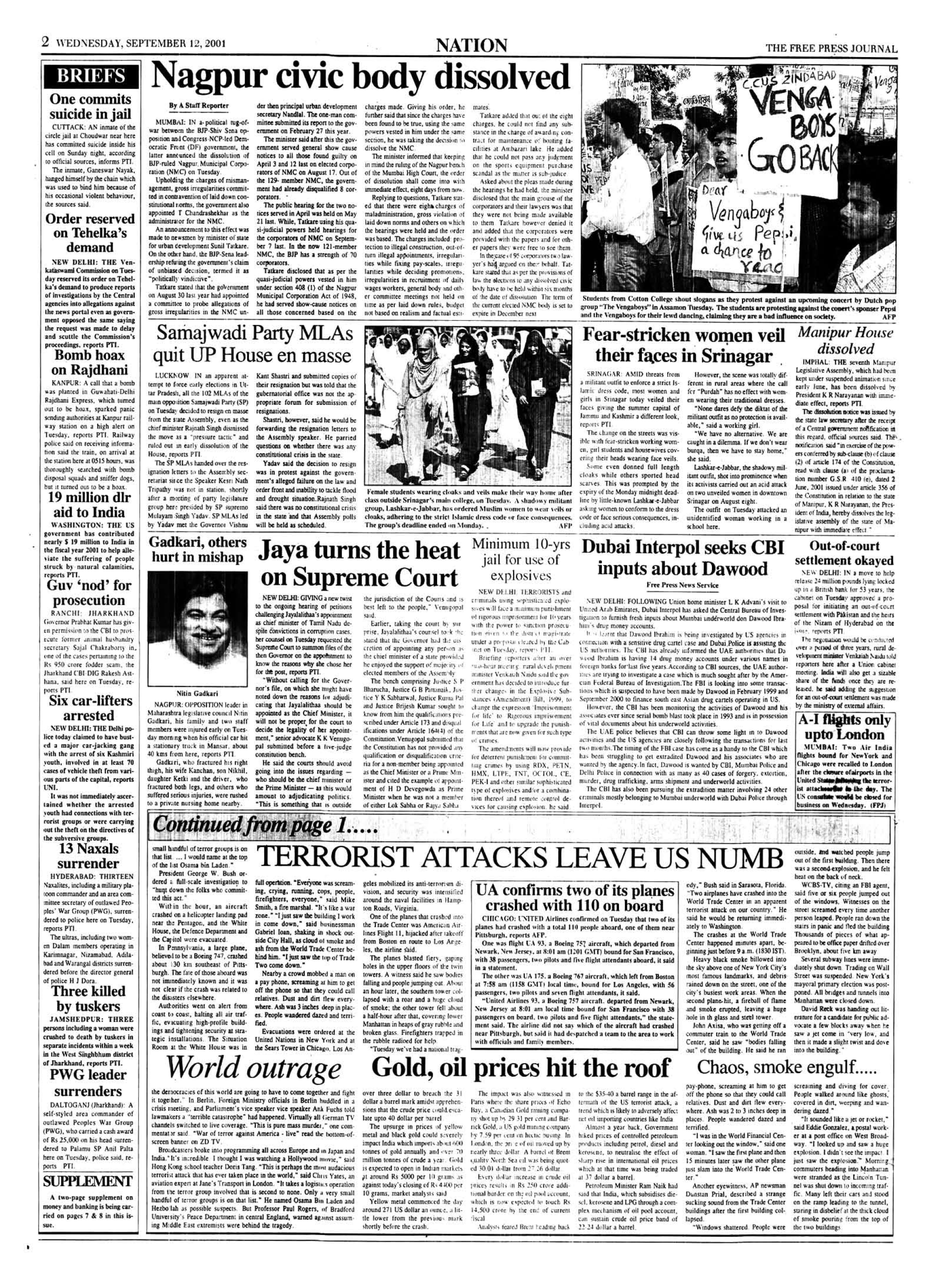 The photograph on the front page showed the twin towers engulfed in fire- one on the verge of collapsing. "Gone up in smoke," the caption read.

The article quoted Republican leader Rudy Giuliani, who was the Mayor of New York City in 2001, saying, " I have a sense it's a horrendous number of lives lost".

"I don't know yet. Right now we have to focus on saving as many lives as possible," he said.

The article further stated that a 'full-scale investigation" was ordered by President George W. Bush to " hunt down the folks" who committed the act.

A fire marshall who was present at the scene described the horrors he witnessed, saying, "Everyone was screaming, crying, running, cops, people, firefighters, everyone."

"It's like a war-zone, I just saw the building I work in, come down," a businessman was quoted saying, in the article.

Al Qaeda leader and Saudi fugitive Osama Bin Laden, who masterminded the attacks, claimed that the United States was targeted due to its role in supporting Israel in the conflict against Palestine, sanctions imposed against Iraq and the continued presence of the US military in Saudi Arabia, among "some other injustices".

The attacks catapulted the United States into a two-decade-long 'War on terror'- which came to an abrupt end last week- against the Taliban regime in Afghanistan, who were believed to have sheltered the 9/11 mastermind.

Bin Laden was eventually killed by US forces on May 2, 2011, after he was tracked down in a hideout at Abbottabad, Pakistan.

On the 20th anniversary of the attacks, US President Joe Biden will visit ground zero in New York City, the Pentagon, and the memorial outside Shanksville, Pennsylvania, where United Flight 93 crashed, to pay his respects to the thousands who lost their lives in the attacks. On 20th anniversary of 9/11 terrorist attacks, here's a timeline of important events after the plane...