Pakistani police have filed terrorism charges against Khan, authorities said on Monday, escalating political tensions in the country as he holds mass rallies seeking to return to office

The terrorism charges come over a speech Khan gave in Islamabad on Saturday in which he vowed to sue police officers and a female judge and alleged that a close aide had been tortured after his arrest.

Hundreds of the former prime minister's supporters gathered outside his home in Islamabad after news of the investigation broke, vowing to "take over" the capital if police tried to detain him.

Khan is our red-line, warns PTI

Pakistan Tehreek-e-Insaaf (PTI) leaders fired off warnings in the early hours of Monday, saying their leader would be a “red line”, as reports of Imran Khan’s imminent arrest made the rounds.

Videos posted on Pakistan Tehreek-e-Insaf or PTI’s twitter account showed hundreds of people marching in support of Khan. Protesters were seen chanting “Imran Khan is our RED LINE… don’t think about crossing it."

Police who were present at the scene claimed they were not there to arrest the former leader, but to maintain the law and order situation.

PTI’s official Twitter account tweeted Fawad Chaudhry with a number of workers at the residence, with the former minister insisting Khan was at home and “hundreds of workers had reached”.

The case comes at a time of heightened tension between Pakistan's government and Khan, who was ousted from power in April in a no-confidence vote.

Since then, the former leader has toured the country to deliver a series of fiery speeches calling for fresh elections and fiercely criticising both the government and the army.

Khan could face several years in prison from the new charges, which accuse him of threatening police officers and the judge. However, he’s not been detained on other lesser charges levied against him in his recent campaigning against the government.

On Saturday, Pakistan's media regulator announced that television channels would be banned from broadcasting his speeches live, accusing Khan of hate speech against state institutions.

The former leader claims the government is trying to censor him. On Sunday, he criticised the ban at another political rally in the city of Rawalpindi.

"What crime has Imran Khan committed? I will never accept this gang of thieves," he told his supporters.

Khan came to power in 2018, promising to break the pattern of family rule in Pakistan. His opponents contend he was elected with help from the powerful military, which has ruled the country for half of its 75-year history.

In seeking Khan’s ouster earlier this year, the opposition had accused him of economic mismanagement as inflation soars and the Pakistani rupee plummets in value.

The parliament’s no-confidence vote in April that ousted Khan capped months of political turmoil and a constitutional crisis that required the Supreme Court to step in. Meanwhile, it appeared the military similarly had cooled to Khan.

In his latest speech Sunday night at a rally in the city of Rawalpindi outside of Islamabad, Khan said so-called “neutrals” were behind the recent crackdown against his party. He has in the past used the phrase “neutrals” for the military. 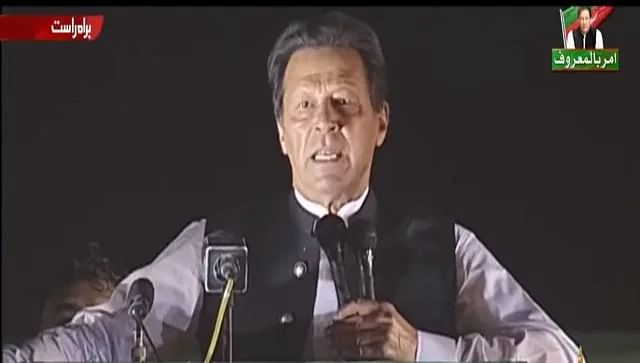