The attack, denounced by some as yet another war crime in the 6-week-old conflict, came as workers unearthed bodies from a mass grave in Bucha, a town near Ukraine’s capital where dozens of killings have been documented after a Russian pullout

Relatives cry at the mass grave of civilians killed during the Russian occupation in Bucha, on the outskirts of Kyiv, Ukraine, Friday, April 8, 2022 | AP

A missile hit a train station in eastern Ukraine where thousands had gathered Friday, killing at least 52 and wounding dozens more in an attack on a crowd of mostly women and children trying to flee a new, looming Russian offensive, Ukrainian authorities said.

The attack, denounced by some as yet another war crime in the 6-week-old conflict, came as workers unearthed bodies from a mass grave in Bucha, a town near Ukraine’s capital where dozens of killings have been documented after a Russian pullout.

Photos from the station in Kramatorsk showed the dead covered with tarps, and the remnants of a rocket painted with the words “For the children,” which in Russian implied that children were being avenged by the strike, though the exact reason remained unclear. About 4,000 civilians had been in and around the station, heeding calls to leave before fighting intensifies in the Donbas region, the office of Ukraine’s prosecutor-general said.

Ukrainian President Volodymyr Zelenskyy, who says he expects a tough global response, and other leaders accused Russia’s military of deliberately attacking the station. Russia, in turn, blamed Ukraine, saying it doesn’t use the kind of missile that hit the station — a contention experts dismissed.

Just minutes after the attack, Ukraine accused Russia of using its Iskander short-range ballistic missile with a cluster munitions warhead. But they later corrected themselves, saying that Tochka-U rockets had been used.

Tochka-U rockets are extremely inaccurate, regularly missing their targets by half a kilometre or more, according to Amnesty International weapons experts.

Pavlo Kyrylenko, the head of the regional military administration in Donetsk, where the attack took place, said that 98 wounded people -- 16 children, 46 were women and 36 men -- were taken to local hospitals.

In an address to Finland's parliament on Friday, Zelensky said that the "Russian military hit the railway terminal," adding: "There are witnesses, there are videos, there are remnants of the missiles and dead people."

He said that "people (were) crowded waiting for the trains to be evacuated to the safe territory" at the station. "Why do they need to hit civilians with missiles? Why this cruelty that the world has witnessed in Bucha and other cities liberated by the Ukrainian army?" Zelensky asked lawmakers.

“I am appalled by the loss of life and I will offer personally my condolences to President [Zelenskyy],” she wrote on Twitter. “My thoughts are with the families of the victims.”

Ukrainian authorities and Western officials have repeatedly accused Russian forces of atrocities in the war that began with a Feb. 24 invasion. More than 4 million Ukrainians have fled the country, and millions more have been displaced. Some of the grisliest evidence has been found in towns around Ukraine’s capital, Kyiv, from which Russian President Vladimir Putin’s troops pulled back in recent days. 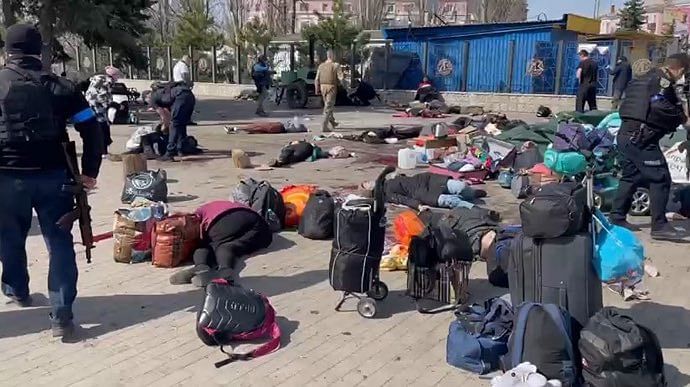