Days after taking over, Taliban blows up slain Hazara leader Abdul Ali Mazari's statue in Bamiyan - Here is all you need to know 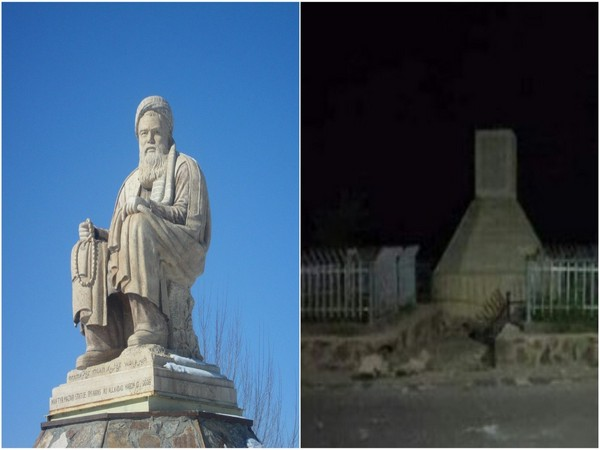 The statue of Abdul Ali Mazari that was blown up | ANI

Kabul: The Taliban have blown up slain Hazara leader Abdul Ali Mazari's statue in Bamiyan, a grim reminder of the destruction of Bamiyan Buddhas during its previous tenure.

"So Taliban have blown up slain Hazara leader Abdul Ali Mazari's statue in Bamiyan. Last time they executed him, blew up the giant statues of Buddha and all historical and archaeological sites. Too much of 'general amnesty," tweeted Saleem Javed, a human rights activist.

Also, Hazara sources have confirmed that Salima Mazari, one of the few female district governors in the country, was now under Taliban custody. She is the Hazara district Governor of Chaharkint, Balkh.

"Hazara sources confirm Salima Mazari is now in Taliban custody. She is the Hazara district Governor of Chaharkint, Balkh," tweeted a Hazara group.

The Taliban on Monday declared an “amnesty” across Afghanistan and urged women to join their government, seeking to convince a wary population that they have changed, a day after deadly chaos gripped the main airport as desperate crowds tried to flee their rule.

But, the older generations remember the ultraconservative Islamic regime that saw regular stoning, amputations and public executions during Taliban rule before the US-led invasion that followed the September 11, 2001, terror attacks.

The Taliban have ruled in accordance with a harsh interpretation of Islamic law and though the terrorist outfit has sought to project greater moderation in recent years, many Afghans remain sceptical. Watch Video: Brave Afghan women protest against Taliban in Kabul, demand not to 'eliminate them from...

Who was Abdul Ali Mazari?

Abdul Ali Mazari was the head and co-founder of Hezbi Wahdat. Hezbi Wahdat, is a Shia’ political party that was formed from a coalition of several political parties after the Soviet withdrawal, according to a biography on afghan-web.com.

The Hazaras are an ethnic group mainly concentrated in the mountainous central region of Afghanistan known as Hazarajat. They are said to be descendants of Genghis Khan, the founder of the Mongol empire, and the Mongol soldiers who swept through the region in the 13th century.

Mazari claimed that Hazaras formed 25 percent of the population of Afghanistan, and that Hezb-i Wahdat was their representative. He demanded the one fourth of the cabinet seats be given to his party.

Mazari who had formed an alliance with Gulbuddin Hekmatyar and Abdul Rashid Dostum against the Rabbani government, began to negotiate with the Taliban as soon as Hekmatyar retreated from Kabul.