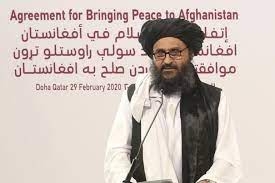 Mullah Abdul Ghani Baradar, deputy prime minister of the Taliban government in Afghanistan, in an audio message confirmed he was alive and said he was not injured. The message, tweeted by Taliban spokesperson Mohammad Naeem, followed reports that Baradar was injured or killed in clashes among the Taliban, Afghanistan's Tolo News said.

Taliban spokesperson Suhail Shaheen took to Twitter to banish the rumours and said, "Mullah Bradar Akhund, Deputy PM, Islamic Emirate of Afghanistan in a voice message rejected all those claims that he was injured or killed in a clash. He says it is lies and totally baseless".

Baradar blamed "fake propaganda" for the death rumours in an audio message posted by the Taliban. Grapevine in Pakistan and Afghanistan had suggested he had been infected with Covid or killed in a bombing.

"There had been news in the media about my death," Baradar said in the clip.

"Over the past few nights I have been away on trips. Wherever I am at the moment, we are all fine, all my brothers and friends.

"Media always publish fake propaganda. Therefore, reject bravely all those lies, and I 100 percent confirm to you there is no issue and we have no problem."

Reports earlier had suggested factionalism within the Taliban after the appointment of Mullah Hasan Akhund as its interim prime minister Baradar as his deputy.