In this photograph made on Oct. 12, 2010 in Mes Aynak valley, south of Kabul, Afghanistan, Buddha statues are seen inside an ancient temple. The valley is the world's second-largest unexploited copper estimated to be worth nearly $1 trillion | AP

Chinese Foreign Minister Wang Yi’s trip to South Asia has been full of surprises. After a planned visit to Pakistan to attend the Organization of Islamic Cooperation conclave as a guest, Wang made an unannounced stopover in Afghanistan, before heading to another unannounced stopover in India. From there, he made his way to Nepal.

Wang’s trip to India was unconfirmed until the last minute, but it was widely expected in the region. His visit to Kabul, by contrast, came as a surprise. China does not officially recognize the Taliban government, but the decision to have Wang meet with Taliban officials in Kabul is a clear sign that Beijing is willing to engage.

In Mes Anyak in Afghanistan, the ancient buddha statues sit in serene meditation in the caves carved into the russet cliffs of rural Afghanistan. Hundreds of meters below lies what is believed to be the world’s largest deposit of copper.

Afghanistan’s Taliban rulers are pinning their hopes on Beijing to turn that rich vein into revenue to salvage the cash-starved country amid crippling international sanctions.

The fighters standing guard by the rocky hillside may once have considered destroying the terracotta buddhas. Two decades ago when the Islamic hard-line Taliban were first in power, they sparked world outrage by blowing up gigantic buddha statues in another part of the country, calling them pagan symbols that must be purged.

But now they are intent on preserving the relics of the Mes Aynak copper mine. Doing so is key to unlocking billions in Chinese investment, said Hakumullah Mubariz, the Taliban head of security at the site, peering into the remnants of a monastery built by first-century Buddhist monks.

“Protecting them is very important to us and the Chinese,” he said.

Previously, Mubariz commanded a Taliban combat unit in the surrounding mountains battling with U.S.-backed Afghan forces. When those troops capitulated last year, his men rushed to secure the site. “We knew it would be important for the country,” he said.

China is hosting a meeting of Foreign Ministers of Afghanistan’s neighbours later this month. This will be the third meeting of the ministers, but the first in which Afghanistan is scheduled to participate. The first meeting was held in Pakistan last September, and the second in Iran in November.

According to Xinhua and Global Times, Wang told Baradar that China welcomes “Afghanistan’s active participation in the joint construction of the Belt and Road, and stands ready to extend the China-Pakistan Economic Corridor to Afghanistan, replicate more successful experiences, and make Afghanistan, with the geographical strength as the ‘Heart of Asia’, a bridge for regional connectivity”.

He said he hopes Afghanistan will “firmly and resolutely” fulfill its “commitment of not allowing any external forces to use Afghan territory to oppose its neighbouring countries or harm the security of other countries”.

Wang is one of the highest level visitors to Afghanistan since the Taliban's return. China, while refusing to offer recognition, has been engaging with the Taliban since their takeover. China has economic and mining interests in Afghanistan and Afghans familiar with past talks between the Taliban and Chinese officials say Beijing wants Taliban commitments to prevent China's Uighur opponents from setting up operations in Afghanistan.

Last July, however, Wang hosted a delegation from the group led by top Taliban leader Abdul Ghani Baradar in the Chinese city of Tianjin, shortly before the group seized power from Afghanistan’s elected government.

At that meeting, Wang sought assurances the Taliban would not allow anti-China groups to operate under their rule and referred to the group as “a pivotal military and political force in Afghanistan.” He said they are “expected to play an important role in the process of peace, reconciliation and reconstruction.”

There have been reports that militants from among the Turkic Muslim Uyghur minority native to China’s northwestern region of Xinjiang have found shelter in Afghanistan. China has carried out a campaign of repression against Uyghurs and other Muslim minorities, including locking a million or more away in political re-education camps.

The overseas East Turkistan Islamic Movement has for years fought a low-level insurgency against Chinese rule.

It has been aligned with the Islamic State affiliate known as Islamic State in Khorazan Province, an enemy of the Taliban, but its current operational status is not know.

Despite consistent and documented reports of Beijing's crackdown the Uighurs, Wang was welcomed as a special guest this week at a summit in neighboring Pakistan of foreign ministers of the Organization of Islamic Cooperation.

There Wang called for negotiations to end the war in Ukraine. None of the OIC participants or host Pakistan, who has been particularly vocal about growing Islamophobia, mentioned China's crackdown on its minority Muslims. That has included the destruction of mosques and punishment for those Uighurs who participate in religious edicts.

Clearly Beijing considers Taliban rule of Afghanistan a done deal and is ready to get back to business as usual. Wang even made a point to denounce “the political pressure and economic sanctions on Afghanistan imposed by non-regional forces.”

The Taliban certainly got the message of Chinese support. Amir Khan Muttaqi, acting foreign minister under the Taliban regime, told Wang that “this is the most important high-level delegation received by Afghanistan” – presumably meaning since the Taliban set up their interim government. He told Wang that “Afghanistan is ready to actively participate in Belt and Road cooperation and strengthen trade and investment cooperation with China.”

Muttaqi also reassured Wang that “Afghanistan is confident of further improving its security environment, stabilizing and controlling the situation, and ensuring the security of foreign institutions and personnel in Afghanistan.”

Security is China’s number one concern in Afghanistan – particularly preventing the resurrection the East Turkestan Islamic Movement, a terrorist group dedicated to Uyghur separatism. Wang was clear that China expects the Taliban to deal with the group: “China hopes that the Afghan side will earnestly fulfill its commitment and take effective measures to resolutely crack down on all terrorist forces, including the ETIM.”

For his part, Muttaqi assured Wang that “Afghanistan is highly vigilant against the resurgence of terrorism and will take resolute and effective measures to eliminate terrorist forces in Afghanistan with all-out efforts. The Afghan Taliban fully understands China’s concerns and will never allow any force to use the Afghan territory to engage in acts detrimental to Chinese friends.”

Outside observers are skeptical that the Taliban are truly cracking down on foreign fighters – many of them the Taliban’s former allies – in Afghanistan.

The Taliban’s spectacular reversal illustrates the powerful allure of Afghanistan’s untapped mining sector. Successive authorities have seen the country’s mineral riches, estimated to be worth $1 trillion, as the key to a prosperous future, but none have been able to develop them amid the continual war and violence. Now, multiple countries, including Iran, Russia and Turkey are looking to invest, filling the vacuum left in the wake of the chaotic U.S. withdrawal.

But Beijing is the most assertive. At Mes Aynak, it could become the first major power to take on a large-scale project in Taliban-controlled Afghanistan, potentially redrawing Asia’s geopolitical map. 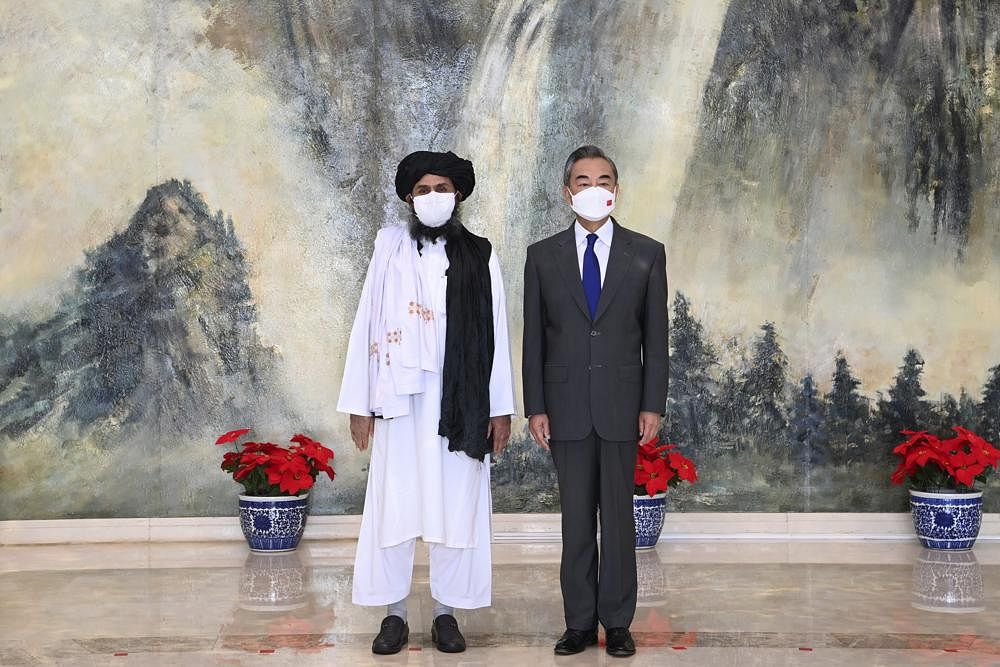