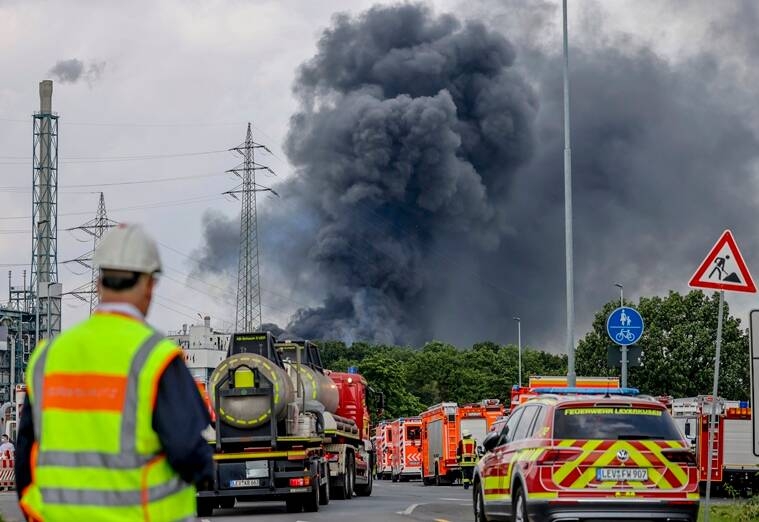 An explosion at an industrial park for chemical companies shook the German city of Leverkusen on Tuesday, sending a large black cloud rising into the air. At least 16 people were injured and five remain missing.

Later on Tuesday, however, the Cologne fire department tweeted that measurements of the air's pollution "do not show any kind of abnormality". They said the smoke had gone down but that they would continue to measure the air for toxins.

The city of Leverkusen said in a statement that the explosion at the Chempark site, about 20 km (13 miles) north of Cologne on the Rhine river, occurred in storage tanks for solvents. It said four people were severely injured and 12 less seriously. Five people are missing.

Currenta, the company operating the chemical park, said the explosion happened at 9:40 am at the storage tanks of their waste management centre and then developed into a fire.

"Sirens were operated to warn residents and warning alerts were sent," Currenta said in the statement.

Police in nearby Cologne said a large number of officers, firefighters, helicopters and ambulances from across the region had been deployed to the scene. They asked all residents to stay inside and warned people from outside of Leverkusen to avoid the region.

They also shut down several nearby major highways.

Daily Koelner Stadt-Anzeiger reported that the smoke cloud was moving in a northwestern direction toward the towns of Burscheid and Leichlingen.

Leverkusen is home to Bayer, one of Germany's biggest chemical companies. It has about 163,000 residents and borders Cologne, which is Germany's fourth biggest city and has around 1 million inhabitants. Many residents work at Bayer, which is one of the biggest employers in the region.

The chemical park is located very close to the banks of the Rhine river.

Currenta has three facilities in the region. More than 70 different companies are based at the locations in Leverkusen, Dormagen and Krefeld-Uerdingen.