HomeWeekendRanveer Singh's nude photoshoot: What drives brands to use nudity in ad campaigns

Ranveer Singh's nude photoshoot: What drives brands to use nudity in ad campaigns

Ranveer Singh has done it again! Shocked the country and made it take a stand. Amidst this mass media and cultural storm-in-the-teacup, one cannot help but remember all the times nudity has been used by the advertising media to express their creativity.

Strategy comes from the creative teams in the agency. While they must ideally tag the end consumer in their campaign brief and the final creatives, sometimes they may be using nudity to explore their own advertising ends. Advertising is a mix of art and science that must lead to commerce. The creative aspect of advertising must align with the marketing objective of brands. Most ads that feature nudity somehow give the impression that they are doing so to attract attention and awards maybe. But what they should be considering is whether the brand’s agenda is being served by this decision.

When Milind Soman and Madhu Sapre modelled for Tuff shoes, sure, there was a controversy, and people spoke of it ad infinitum for days. But if the idea was for the brand to be memorable that did not happen because no one recalls it today. Take the example of the ad featuring Bipasha Basu–Dino Morea for the Swiss-based Cadila undergarments. She is lying on her stomach on a couch while he is trying to take off her undergarments with his teeth while wearing the bare minimum himself. The ad came under severe criticism and had to be taken down. This is a clear case of a mad creative team getting its satisfaction through a wild creative outlet. But I believe it did nothing for the brand. 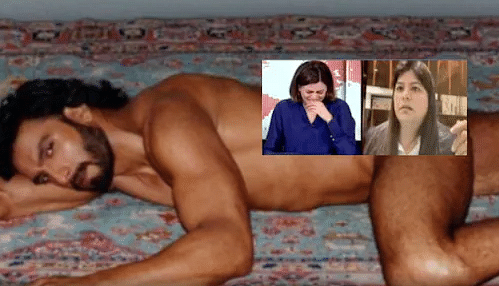 Take, for instance, M R Coffee featuring Malaika Arora and Arbaaz Khan, which used steamy bedroom scenes for its campaign. The only achievement of the campaign was that soon after the couple got married. In most of these instances, despite being the subject of so much attention, neither the agency nor the brand survived. The marketing purposes were never served, maybe the advertising objective was since the advertisers shot to fame; but the clients got conned.

I like Ranveer Singh as an actor but I don’t understand his objective with this photoshoot. He’s already famous.

Ultimately, people have a right to their bodies and if they want to create a sensation, why should we object? I believe this trend will keep returning cyclically whenever someone needs to cause a sensation but rather than getting upset over it, why not simply ignore it? On the other hand, Dove’s world-famous campaign was a beautiful example of the concept. Women who are proud of their bodies and comfortable in them are walking around, at times in the nude – what a liberating thought. It was the opposite of body shaming and a shining example of a powerful campaign featuring nude bodies without catering to a voyeuristic view. Hence, it stands tall since it’s so difficult to create something so cutting edge and yet so brilliantly positive.

Nandini Sardesai, educationist and former CBFC board member, on nudity in ad campaigns: "I don’t think it brings any kind of value to the brand. However, it most certainly elicits attention and makes people take notice of the product. It brings them — the brands and the model/actor — publicity. It depends on how people perceive it, which can be positive or negative."

Subhash Kamath, CEO — BBH India and Chairman — ASCI, on nudity in ad campaigns: "Nudity per se isn’t relevant for most brands unless it’s a product for which sexuality or sensuality is important. For example, a condom brand. There have been cases where nudity was part of the creative idea or the narrative like the controversial ad for Tuff Shoes with Milind Soman and Madhu Sapre. But it needs to be tastefully executed without an intention to titillate or be unnecessarily provocative."

—As told to Anupama C