Advertisement
Home / Weekend / Did you know there are professional cuddlers? Here's what they do and the effect COVID-19 has on them

Did you know there are professional cuddlers? Here's what they do and the effect COVID-19 has on them

Cuddling is a new concept that explores the forgotten language of touch, and uses it as a therapy to increase the flow of happy hormones to comfort frayed nerves, soothe weary hearts, ease anxious minds and bring smile on sad faces. FPJ writer takes a look at how pandemic changed the rules of engagement for cuddling

In his book, Hammer on the Rock: Evening Talks with a Modern Buddha, Osho wrote, “By and by we have forgotten where to touch, how to touch, how deep to touch. In fact, touch is one of the most forgotten languages.” In the fast-paced, socially distant world (thanks to COVID-19), most of us would agree with his statement. Human touch has a positive effect, both physiologically and psychologically, but we are losing touch with this expression of love, care, affection, and healing as a modern society.

To fill the gap, today, there are cuddle services where people buy and sell touch as a form of therapy to those deprived of it. The subject fascinated writer and director Sanjeev Vig to make a short film, Call Him Eddy, on the life of a professional cuddler Edith D'Souza aka Eddy essayed by actor Sanjay Suri. The film was released amid the global pandemic in August last year; it only made apparent how touch had gone missing from our lives, and how there was a greater longing to be hugged and cuddled by our loved ones.

When documentary filmmaker Riya (actor Eisha Chopra), who is both curious and sceptical about Eddy's professional choice, comes calling, he tells her how human touch releases a love hormone called oxytocin that among other things relaxes the mind and helps one live longer. To see the benefits of a nonsexual touch as a form of therapy for herself, she decides to try it out. In a moment of “companioning, sitting shoulder-to-shoulder” next to Eddy, she delves deeper into her loss of touch in the form of emotional trauma. She realises how that loss bears heavily on her being. Reliving emotional trauma helps Riya find herself, afresh and anew. Much like her, it was that emotional void in life that made Edith, a former senior executive in a media agency, call it quits and use the benefits of touch — hug or cuddle — that he calls “a necessity much like sex” to “bring life to the dead”.

“At a time when I was already in a space of thinking how the virtual world has impacted human relationships and communication, a script like "Call Him Eddy" came to me. It was love at first read! I told the director this film must be made with or without me. I am fortunate that I got to play Eddy. We listen to words before we feel them, a cuddle needs no words! When we meet our loved ones or we are parting, without a hug it feels very odd. A hug can open and close at the same time. Hugging a stranger may feel odd but if it’s a part of therapy, perhaps it can do wonders," says actor Sanjay Suri.

True that. As humans, we thrive on love, and touch is the most basic manifestation of that emotion. After all, it is a mother's touch that comforts a crying baby and touching that heals while rubbing an ointment on an aching back. Parenting coach Payal Sharma quotes how research suggests that “people who do not receive adequate amounts of touch develop various communication problems from reduced learning of speech (Thayer, 1986) to aggression (Field, 2002a).”

Extolling the benefits of touch for humans of all age groups from a toddler to an adult, she adds, “Touch therapy or cuddling is a way of demonstrating love. The rush of feel-good hormones works wonders for humans. Children who are hugged and cuddled often grow up as emotionally secure. In the long term, it eases stress, reduces depression and beats anxiety that stems from fear.” On the other hand, touch deprivation leads to poor self-esteem and even depression in a few cases, she warns.

A loving touch can be one of the simplest and most beautiful gifts to ourselves and our loved ones and can have a healing experience for another. Like Eddy, Suzanne*, who is a professional cuddler or a cuddle companion, chose to become one to help others who need that touch to shift a mood, lighten discomfort, or unclog a more profound emotional layer.

We listen to words before we feel them, a cuddle needs no words! When we meet our loved ones or we are parting, without a hug it feels very odd. Hugging a stranger may feel odd but if it’s a part of therapy, perhaps it can do wonders.

She calls herself a travel enthusiast and says, “People are touch-deprived, and human interaction has been lost in this digital world. It leads to an unhealthy mental state and depression sometimes.” What makes her click with her clients is her knack for lending a sympathetic ear and a shoulder to cry on because she “loves listening and provide platonic cuddle service to make one feel better.” Like Eddy, she's non-judgemental, and the conversations that she has with her clients are strictly confidential.

But mind you, as Eddy mentioned, cuddle therapy or touch therapy is purely platonic in nature, and there are no sexual connotations. “It is human. If there is an urge, we acknowledge it, but we don’t encourage it,” he tersely tells Riya in the film. That pretty much sets the rule of engagement for a Cuddle Therapist or a Touch Therapist. Bamboo rice: The next superfood that can boost your health and well-being
Advertisement

As Raj Veer, author at CuddleConnect.com, who also has four books on this subject to his credit, clarifies that they are gradually using Touch Wellness as a term to ease the hesitation that comes with the world cuddle. “Cuddle at times can be interpreted by some as possibly something that can lead to sex. We nurture pure platonic touch and connection amongst our members. To emphasise that, we are starting to inject touch wellness as the alternate term to break that mental block around cuddle!”

Veer further adds that CuddleConnect.com was launched in India in October 2018, three months before its worldwide launch. Today, the site has almost 7% Indian males and females out of their entire member base. That’s surprisingly a high number worth of a mention and speaks about how the idea is fast catching up with Indians. “We have found that Indians across the USA, Canada, India, Australia, and the UK are the maximum adopters of our site,” he says. But cuddling comes with its challenges. “To start with, it is a fairly new concept. The idea of touch-oriented wellness and connection is not widely acknowledged and adopted. Even though the world is full of touch-deprived people, everyone is hesitating to come forth and embrace the idea of hugs and touch,” he rues.

The cuddling community was probably one of the worst-hit by the pandemic because the business is all about touch, hug and cuddle, that was impossible while maintaining social/physical distancing. “According to a rough estimate, 30% people are lonely in this world, and they need more touch-oriented affection, connection, and bonding. Pandemic is challenging our community with that very aspect,” quips Veer.

But like they say, where there's a will, there's a way. Thanks to innovations such as virtual cuddling that's an online way and more about connecting at a deeper level than just physical touch, the average footfalls on these websites are on a rebound. Giving a rundown, he adds, “The idea involves engaging in meaningful conversation, playing virtual games together, eye gazing via video calls, even expressing how each of them would like the other to touch and engage in meaningful self-touch relaxes and heals.”

So if you are yearning for that touch, find a cuddle buddy at the click of a mouse, and get your fill of happy hormones. As Suri says, “Where words end, a hug begins.” 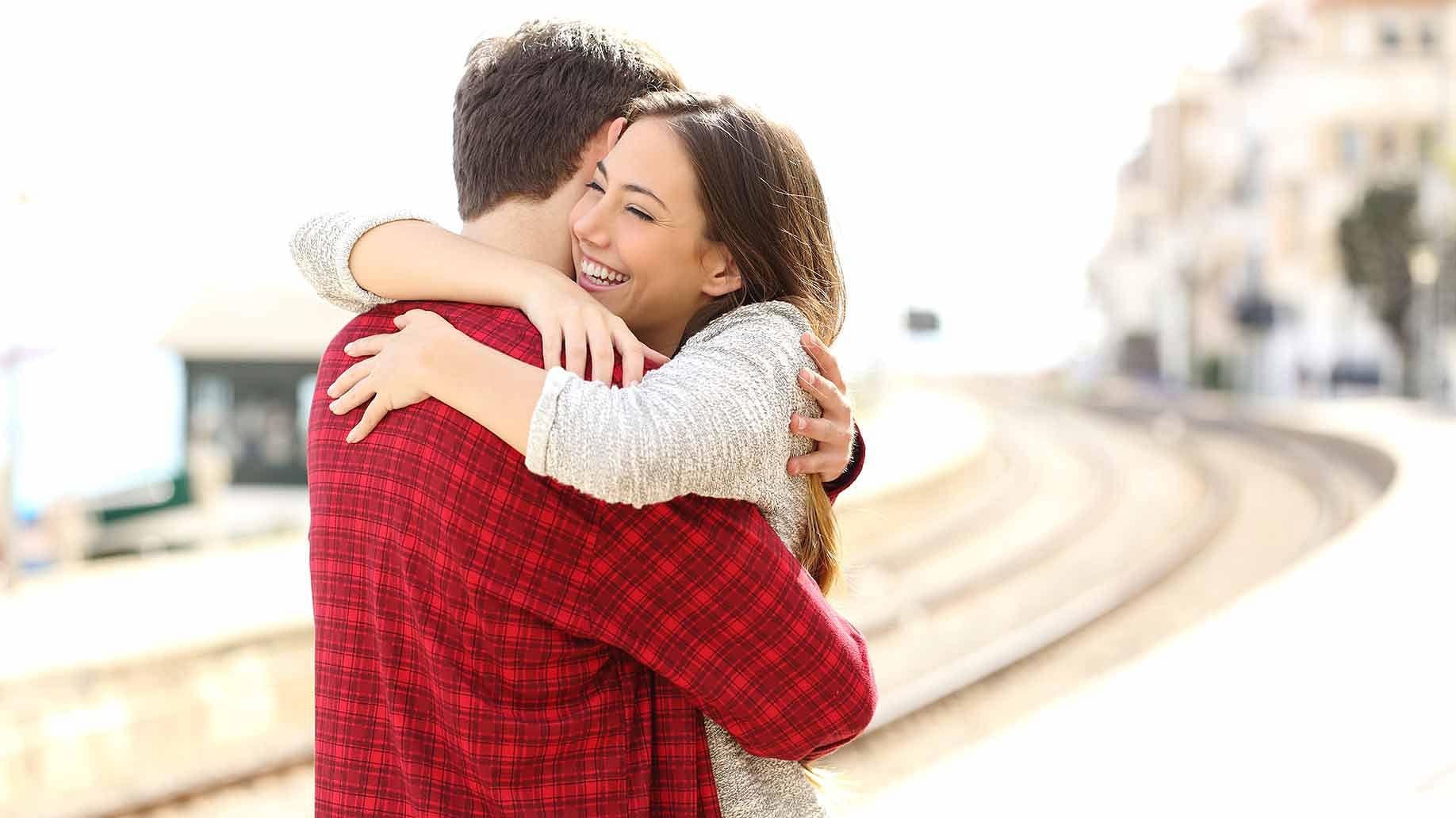 Say yes to hugs for the sake of health