HomeViralWATCH: Protesters in Jaffna wash their hair with shampoo on streets as Sri Lankan police fire water cannons on them

WATCH: Protesters in Jaffna wash their hair with shampoo on streets as Sri Lankan police fire water cannons on them

As Tamilians in Sri Lanka are on the streets raising their voices for their rights, the police tried to shoo them away with water cannons. However, in counter to the police's action, the protesters pulled out some shampoo and started using the gushing water to wash their hair

WATCH: Protesters in Jaffna wash their hair with shampoo on streets as Sri Lankan police fire water cannons on them | Twitter @Thusi_Kumar
Follow us on

Sri Lanka: On the day of Thai Pongal on Sunday, Tamilians in Sri Lanka gathered on the streets near Jaffna University to protest against the scheduled visit of President Ranil Wickremesinghe. To oppose the protest and shoo away the Tamils, the police fired water cannons at the protesters.

However, in counter to the police's action, the protesters pulled out some shampoo and started using the sprayed water to wash their hair.

Check out some visuals right here:

They also did this.

It seems the Tamils were definitely not going to let Ranil come and go quietly. https://t.co/EiolKlPqvp 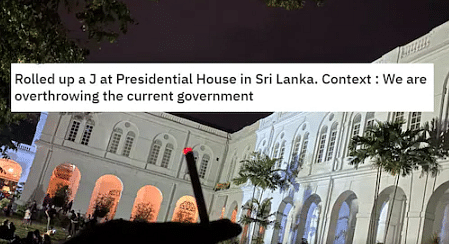 According to reports, the Tamil-speaking crowd gathered there were planning to march to Nallur Kovil to oppose the President's visit to the Thai Pongal ceremony being held there. In regard to the police firing water cannons at them and the protestors' counteract, there are no confirmed reports of casualties as a result of the clashes.

The country was reeling with economic crisis which led to an uprising in the country. Many protestors had stormed presidential palace when former president Gotabaya Rajapaksa had fled the country.

Protestors were seen smoking joints and videos of them taking a dip in the pool, eating in the kitchen and relaxing in lavish rooms and gymming at the residential palace had gone viral on social media. Union Budget 2023: Classic memes to invest for some laughter

'OMG your daughter is the DNA of your husband': Fans comment on Malti Marie Chopra's looks after...