HomeViralON CAMERA: Passengers risk lives while trying to board a moving train at Kalburgi railway station

ON CAMERA: Passengers risk lives while trying to board a moving train at Kalburgi railway station

A video allegedly from Karnataka's Kalburgi railway station has gone viral on Twitter and it shows people trying to recklessly board a moving train. An RPF official, porter, and people on the platform rushed to the rescue of a woman passenger who slipped while entering the coach

ON CAMERA: Passengers risk lives while trying to board a moving train at Kalburgi railway station | Twitter @gautyou
Follow us on

Be it people trying to take a selfie on tracks or travelling on the edge of the train's footboard, several videos showing people risk their lives during train journeys have surfaced online. In a recent tweet, we can see a video showing people rushing to board a moving train.

A video allegedly from Karnataka's Kalburgi railway station has gone viral on Twitter and it shows commuters trying to recklessly get into the coaches of a departed train. During the attempt, a woman was seen risking her life as she lost the grip of the train door while missing to enter the coach.

The on-duty RPF and a porter on the platform ran to her rescue along few others present there in order to rescue her from slipping into the gap between the platform and the train. Seconds before the woman took to board the moving train, another passenger was caught on camera performing the same act.

#Karnataka | People who travel in trains regularly shud resolve that in 2023 they will not attempt to board when it's moving.

This woman had a lucky escape in Kalaburagi railway station thanks to alert folks on the platform. pic.twitter.com/x707DdaddQ

In an other incident from the same location, a mother and her son huddled next to platform wall as a speeding train passed closely on the tracks. Miraculously they escaped with no injuries and the footage from the incident went viral on social media. Reportedly, the duo were crossing the railway tracks at Kalaburgi train station. 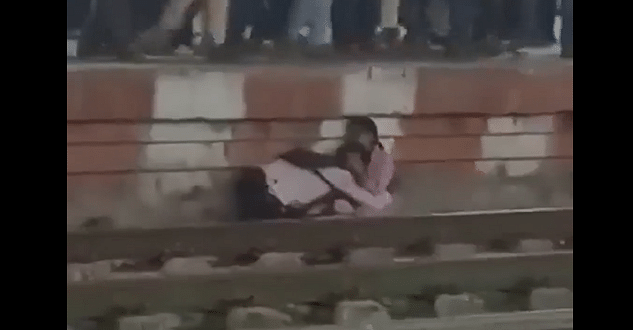