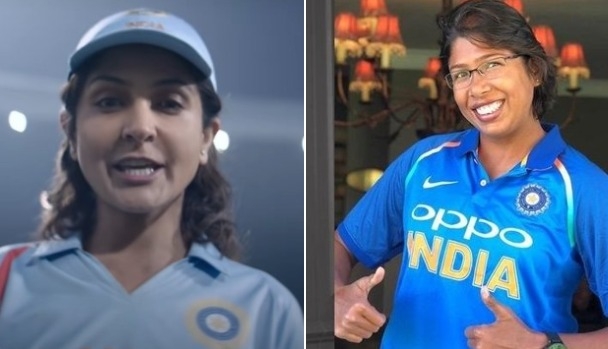 Bollywood actress Anushka Sharma on Thursday announced her comeback with the film 'Chakda Xpress,' based on the life of legendary Indian cricketer, Jhulan Goswami.

The superstar actress did not only make the announcement but also dropped the teaser with a beautiful note that read, "It is a really special film because it is essentially a story of tremendous sacrifice. Chakda Xpress is inspired by the life and times of former Indian captain Jhulan Goswami and it will be an eye-opener into the world of women’s cricket. At a time when Jhulan decided to become a cricketer and make her country proud on the global stage, it was very tough for women to even think of playing the sport."

Anushka also noted that Jhulan's life is a living testimony that passion and perseverance triumph over any or all adversities and 'Chakda Xpress' is the most definitive look into the world of women's cricket back then.

"As a woman, I was proud to hear Jhulan's story and it is an honour for me to try and bring her life to audiences and cricket lovers. As a cricketing nation, we have to give our women cricketers their due. Jhulan's story is truly an underdog story in the history of cricket in India and the film is our celebration of her spirit."

While fans were happy to see the actress making a comeback on the big screen, many thought that actress looked unconvincing in the role. Some found a miss-match in the skin tone and height, while others critiqued the actress' Bengali accent. Some even went on to say, "Jhulan Goswami is a sports icon in India, she deserves better."

It would have been a nice movie to watch, but then you played the lead role. All spoiled!!

This is looking bad ,neither is she picking up that accent and nothing in this trailer looks authentic ! Anyways hoping for the best ,btw @JhulanG10 can be tagged as well! Rather than just the actress 🙏🙏🙏

The way you have done overacting in this movie ,I don't think one will open his/her eyes for this movie .

No hate...but Anushka didn't look convincing in the role at all!

‘Chakda ‘Xpress’ is being produced by Clean Slate Filmz and directed by Prosit Roy. The film marks Anushka’s onscreen comeback and OTT debut after a gap of three years since she acted.