The police have already registered a case against the PFI members for unlawful assembly and they are looking into the slogans matter, said Deputy Commissioner of Police Sagar Patil.

Pune: More than 60 booked for holding protest over action against PFI | ANI
Follow us on

The city police said they were looking into the matter.

The PFI had organised a protest outside the district collector office in Pune city on Friday to denounce the recent nationwide raids on the organisation and the arrest of its activists. During the protest, the police detained around 40 protesters.

A video of "Pakistan Zindabad" slogans being raised when the protesters were taken into custody and made to sit in a police vehicle, went viral on social media.

When asked about the pro-Pakistan slogans by the protesters, the city police said they were investigating the matter.

"We have already registered a case against the PFI members for unlawful assembly and we are looking into the slogans matter," said Sagar Patil, Deputy Commissioner of Police.

Taking to Twitter, Bharatiya Janata Party (BJP) MLA Nitesh Rane said those who raised pro-Pakistan slogans should remember that they will not be spared. He also demanded a ban on the PFI.

"To all those shouting Pakistan Zindabad slogans in support of PFI in Pune.. Chun chun ke marenge.. Itna yaad rakana!!! #BanPfi," he said.

Their heart is always in Pakistan, physically they are in India, but in reality they are traitors.
“Pakistan Zindabad" slogans ring out at #PFI protest rally in Maharashtra's Pune.

Another BJP MLA Ram Satpute sought a strict action against those who raised slogans, and said the Pune police should arrest them.

The PFI, formed in 2006, claims to strive for a neo-social movement ostensibly for the empowerment of marginalised sections of India, and is often accused by law enforcement agencies of promoting radical Islam. 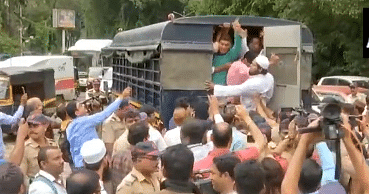