He swings the new ball both ways. Takes wickets in the Powerplay. Comes to break partnerships in the middle overs. And most importantly, nails those yorkers and bowls slower balls in the death. He is Arshdeep Singh, India’s new go-to bowler in the T20s.

When India’s premier pacer Jasprit Bumrah was ruled out of the T20 World Cup, people started wondering how India’s pace attack would fare in the Australian conditions. Bumrah had all the skills: pace and experience to bowl at any stage of the match.

Although it is impossible to fill the shoes of a bowler like Bumrah, young Arshdeep is putting his hand up every time India need him. In the four matches of the World Cup so far, the left-arm pacer has already taken nine wickets in four matches.

He has bowled tough overs and shown character every time the ball is handed to him. He got India those major breakthroughs at the top in almost every match. Since India had a lot of problems in the death bowling coming into the World Cup, Arshdeep’s role became much more important.

“Arshdeep, when he came into the scene, we asked him to do the death overs for us. With Bumrah not there, it was a tough job for someone to take up. For a young guy to come and do that kind of a job is not easy, we've prepared him," Rohit said at the post-match presentation after India’s win against Bangladesh on Wednesday.

India had to defend 20 runs in the final over against Bangladesh and Rohit backed Arshdeep to bowl it despite senior campaigner Mohammed Shami also having an over left.

"He's been doing it for 8-9 months. I had to back someone who had been doing it regularly, it was a choice between Shami and Arshdeep," Rohit added.

The 23-year-old just a month back went through a lot after dropping a catch against Pakistan, but he has come out stronger. It is never easy to hold your nerves in an event like the World Cup. Arshdeep might still be in his early days, but one can’t deny the fact that he has what it takes to serve India for a longer time.

With India expected to make it to the semi-finals, Arshdeep would have to play a major part in the all-important game. He has a chance to emerge as a hero and there’s a huge possibility that he would come out roaring. 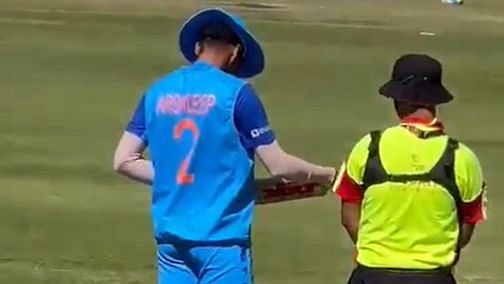