The two youth, allegedly members of the infamous 'Koyta Gang' (machete gang), have been arrested by the Bharti University Police.

Screengrabs from the video of Koyta Gang members being paraded by police. |
Follow us on

Horrifying visuals surfaced on social media on the night of Wednesday, December 28, 2022, when two men created terror in the area of Sinhagad Law College in Ambegaon, Pune. The accused tried to stab civilians, broke into shops and stopped commuters, spreading fear in the area. The two youth, allegedly members of the infamous 'Koyta Gang' (machete gang), have been arrested by the Bharti University Police.

The main accused in this case, Karan Dalvi, has been arrested by the Pune Police from Beed.

Videos of scared citizens running helter-skelter by this sudden incident had come to fore on Twitter. Two Sinhagad police personnel on patrol chased and caught one of them.

At Sinhagad Law College, two youths had carried out an unprecedented attack on people with machetes. Police personnel of Sinhagad Road Police Station had chased two of them and detained one. Karan Dalvi, the other accused, was absconding since then. After that, Bharti Vidyapeeth Police arrested Karan Dalvi from Beed, they paraded them to prevent such a crime from happening in Sinhagad College area again. 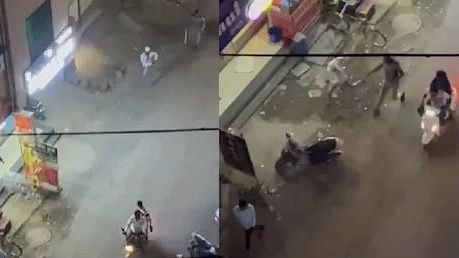 What exactly happened that night?

According to the information given by the police, Karan and his minor accomplice, carrying machetes in their hands, came in Khau Galli in front of the law college in Ambegaon area around 10 pm. They initially hit the two-wheelers parked on the road. After this, they entered a hotel there and attacked one of the diners. From there, a student who was walking on the road was attacked with machete. After this, a plastic stool was thrown on the back of another person.