HomeMumbaiWe are devotees of Goddess Kamakhya so we have come to Guwahati, says Eknath Shinde

Slams opposition saying they have no work but to criticism, let them criticise. NCP and Congress slam Shinde back for the visit when farmers are in deep financial crisis and youth acre desperately looking for jobs.

Mumbai: Chief Minister Eknath Shinde, who was accompanied by ministers and legislators from his camp, after landing at Guwahati on Saturday strongly justified the visit after four and months following rebellion led by him against Uddhav Thackeray led Shiv Sena.

‘’We are devotees of Goddess Kamakhya. So we have come to take the darshan of the goddess. The Chief Minister of Assam had invited us and because of his invitation we have come here,’’ said Shinde who and the ministers and legislators were given a red carpet welcome by the BJP led government in Assam.

Without naming the leader of opposition in the state assembly Ajit Pawar and other opposition parties for their criticism over their Guwahati visit, Shinde said, ‘’Opposition is left with no work but to criticise. Let them criticise. We are working people. A government in the minds of all the common people was formed in June in Maharashtra,’’ he noted.

Ajit Pawar on Friday takes a swipe at Shinde

‘However, Shinde said, ‘’Assam government welcomed us. It's a pleasure. There is satisfaction. We have got another chance to come again here and take the darshan of Goddess Kamakhya. We will visit the temple and have a darshan.’’ He added that the Assam CM is hosting a dinner for them on Saturday evening.

When asked why some of the legislators and ministers were missing, Shinde said they have already informed him that they have taken a prior permission due to elections in their constituencies and prior engagements. About five to six MLAs have skipped the Guwahati visit that sparked the debate that all is not well in the Shinde camp.

However, industry minister Uday Samant downplayed the absence of a few legislators. ‘Whatever the debate, we are all united. There may be more people with us when coming," he claimed. Samant did not divulge further details but hinted that legislators and leaders from the Uddhav Thackeray led Shiv Sena Uddhav Balasaheb Thackeray may migrate to their camp.

Samant ruled out the possibility of mid term elections in Maharashtra. ‘’I think there is no question of holding mid-term elections. Some people are afraid that our people will go here and there. So all this is going on to boost their morale. The midterm election talks to keep telling them that power is coming. There is a lot of politics behind this",he noted.

Meanwhile, state Congress chief spokesperson Atul Londhe took a dig at the Shinde camp for its Guwahati visit. ‘’Enjoy out of public money. Maharashtra is watching you,’’ he said.

The state NCP chief spokesperson Mr Mahesh Tapase said the Shinde government will collapse soon due to the anger of the Goddess Kamakhya.

‘’After Supreme Court’s verdict on November 29 on the Maharashtra political crisis and after that 16 MLAs will be suspended. Eknath Shinde himself is among them,’’ he added.

He claimed that the Shinde government has neglected the financial crisis faced by farmers and it was responsible for major projects moving out of the state losing several jobs needed for the youth. 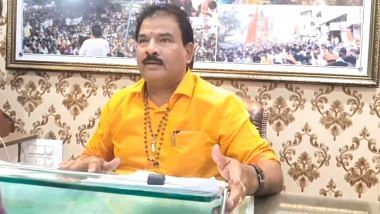