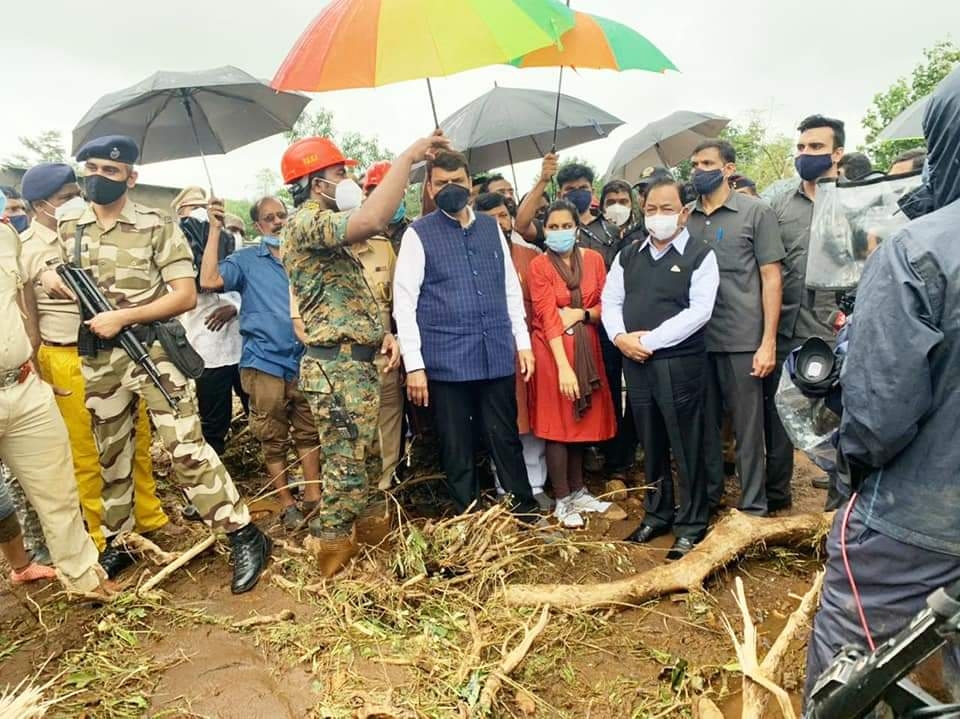 Union Minister for MSMEs Narayan Rane assured all help from the Centre to help mitigate the sufferings of the flood victims of western and coastal Maharashtra. | Twitter/@MeNarayanRane

Union Minister for MSMEs Narayan Rane on Sunday assured all help from the Centre to help mitigate the sufferings of the flood victims of western and coastal Maharashtra.

"The Centre will definitely help out the state and Centre will rebuild the Taliye village," he said, visiting the small village near Mahad that was wiped out in a hillslide on Thursday, killing more than 50. 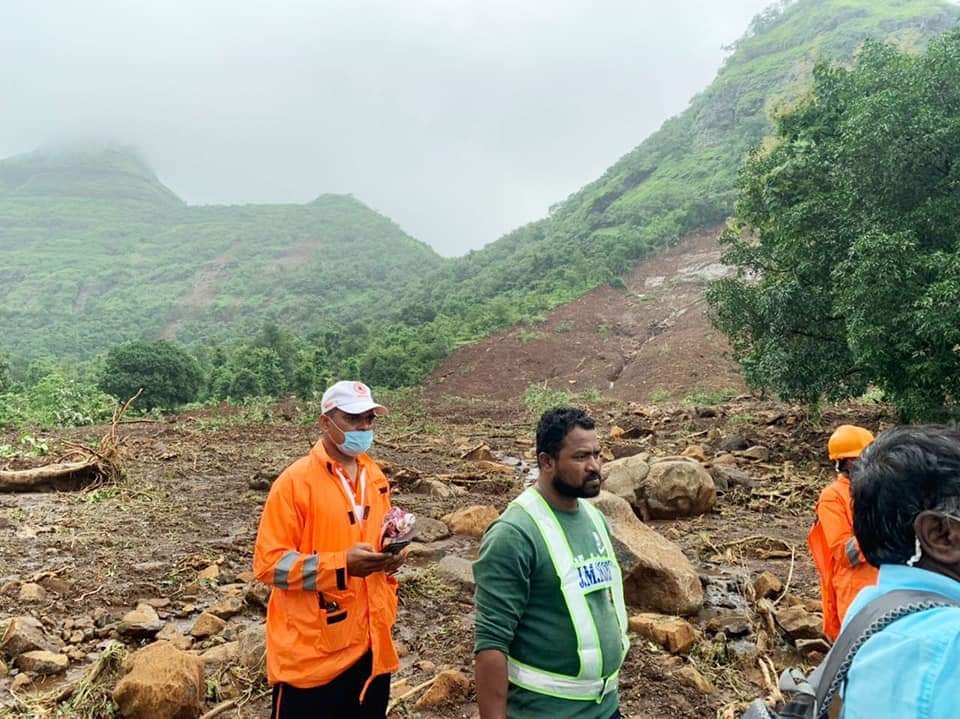 Accompanied by the Bharatiya Janata Party's Leaders of Opposition Devendra Fadnavis (Assembly) and Pravin Darekar (Council), Rane -- who hails from Sindhudurg in coastal Konkan -- went around viewing the flood-ravaged regions of the region.

He inspected the rescue and relief operations and lauded the efforts of the various agencies like the Army, Navy, Air Force, coast guard, NDRF, SDRF, police, fire brigade, and others, involved in the herculean task amid huge adversities and inclement weather conditions. 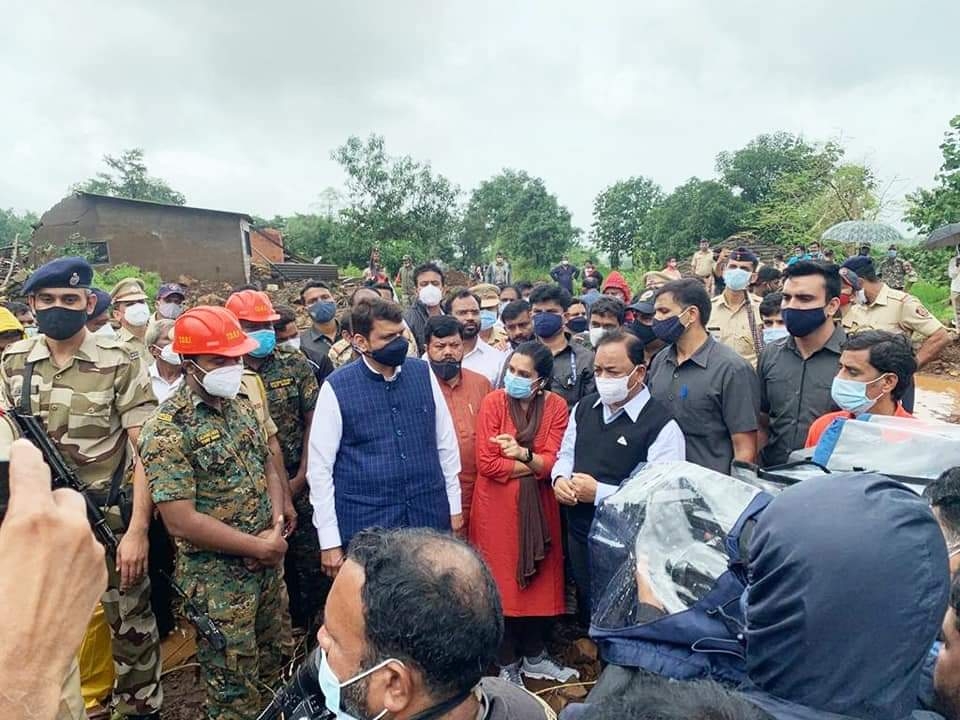 Rane, a Rajya Sabha Member, said that prior to his visit here, Prime Minister Narendra Modi spoke to him.

"He asked me to visit the site and submit a report on my return. The Centre will certainly extend all help to the people here," Rane said.

To a query on how a chain of tragedies is hitting Maharashtra, Rane curtly cut it short by making it clear that "this is not the time to indulge in pointing fingers at anyone."

"Who could have ever thought that this hill would come crashing down like this. The topmost priority now is to assist the affected populace which has lost everything in the disaster," he declared. 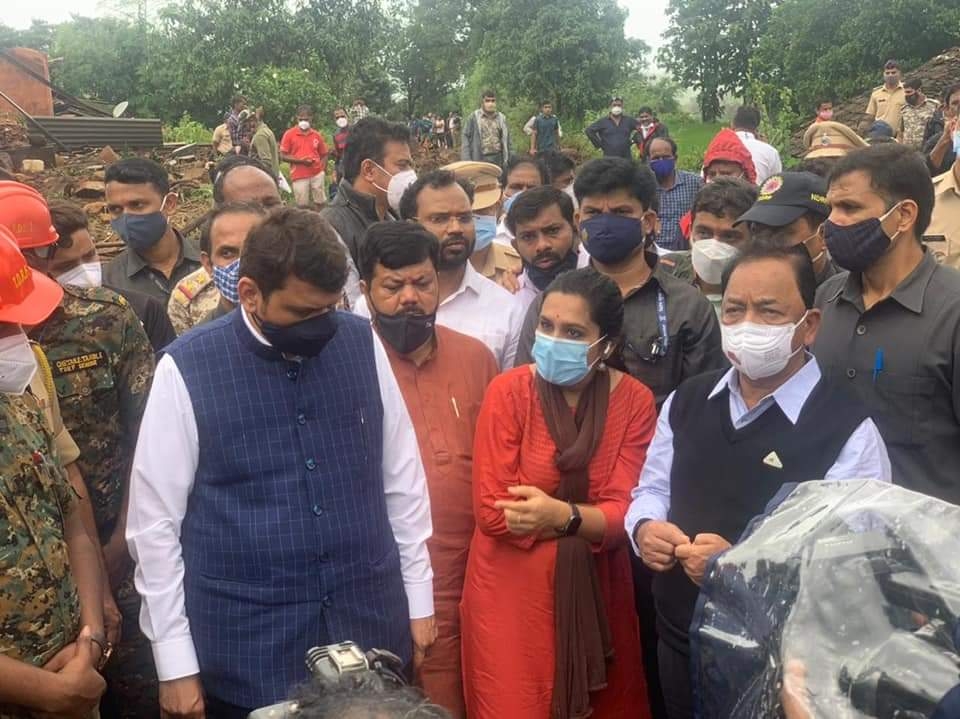 Raigad bore the brunt of the torrential downpour that hit 6 districts since Thursday. | Twitter/@MeNarayanRane

Taliye village was buried under a hillslip early on July 23, killing at least 50 and with another like number missing, as Raigad bore the brunt of the torrential downpour that hit 6 districts since Thursday.

According to the State Disaster Management Authority, (SDMA) the official death toll in rain-related incidents has mounted to 112 besides 99 others missing, in the past 3 days of unprecedented monsoon havoc that saw some towns and villages submerged under 15-20 feet floodwaters.

The districts also witnessed a series of big and small landslips, roads and bridges getting washed away, agriculture fields still inundated, homes completely damaged, over 1.35-lakh people shifted to camps, and as flood waters receded a trail of death and destruction visible all around.